For The Birds Comments (0)

Legendary vocalist Yma Sumac is probably one of the only singers I've heard whose throat might actually be packing the oft-advertised, never-achieved four-and-a-half octaves. Certainly, Cyndi Lauper and Mariah Carey don't have the ability to sing in 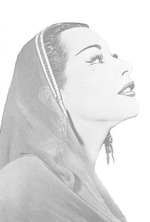 frequencies that birds understand, a legend associated with Yma. I discovered her music in the '80s and literally weeks later, she was making a totally rare appearance in Chicago, conveniently close to where I was attending college. I went to her show (alone), she sang lower and higher than I've ever heard a human sing and I later requested permission to kiss her hand when she received fans after the show. She dramatically extended a heavily lotioned and perfumed mit for me to smooch and graciously, perhaps too, signed my program. I was in a phase where I was fixated on collecting

autographs...I was at Field's for Cher's perfume launch and got to ask her a question, met Ultra Violet and had her sign a lightbulb (so it'd be an Ultra Violet lightbulb) and wrote away to Shana to praise her "I Want You" 12-inch single (she replied with a lengthy, handwritten note and dubbed me "a good fan"), had authors inscribe their first (and last) books to me, gnashed my teeth in envy when a roomie stuck around a few minutes longer than I after a Eurythmics gig and got Annie Lennox's bored scrawl. So as you can see, 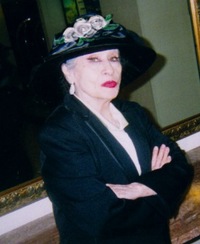 I was all over the map when it came to autographs. But collecting Yma's autograph(s) was a favorite pair of memories. "Pair" because I doubled my pleasure, turning up as the first person in line at her Rose Records signing the next day or so. Behind me in line was a crazed fan with a little trunk FULL of Yma vinyl singles. Obviously I was not the fan he was, so why did I need to be first? I think stardom is fascinating, but it's been devalued by phony stars like Tara Reid and Anna Nicole Smith and any guy from Laguna Beach. Yma Sumac is a star, whether she's an Incan Princess or a New Jerseyan named Amy Camus, and even if she admits on her site to enjoying Jerry Springer. I'll probably never appreciate Yma's singing as much as our avian friends, but I did a Google search on a "lark" and found she's very much alive, still warbles on occasion and looks pretty damn good for 78ish. Catching site of her made me feel like a bird-watcher spying a rare species: It's a pleasure to behold and just to know it exists.