The Diva, The Dance Floor & Her Wardrobe Comments (0) 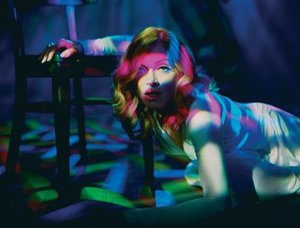 For celebrities used to doing carefree backstrokes in a sea of adulation, the last several years have been sink or swim in snark-infested waters—and there’s no indication that help is on the way.

America’s steadily increasing fascination with and love/hatred for celebrities has lately given unlimited exposure to not only the famous and infamous, but also the recently anonymous, creating unprecedented competition for coverage. Entertainment magazines have whittled down the concept of stardom to its barest essentials—a modicum of notoriety, a persona capable of being skewered or celebrated (more often the former) in one sentence or less, pure availability. MTV can get you on Seventeen by handing you a script and filming your “real” life. Blogs are accidentally crafting lifelong public images for stars using strings of stolen paparazzi photos cleverly MacPainted with IMO caps.

Fame is a virus—it’s spreading, and it’s destroying all but the sturdiest of hosts.

This fandemic presents a problem for established stars of every medium. Average folks catapulted into the big leagues are completely willing to do or say anything to grow their household-name status, not caring that most of these newcomers are likely to flame out in record time, whereas bona fide stars have traditionally worked hard to appear aloof, as if fame and popularity are almost a burden, side effects of their true vocations—singing, acting, reporting the news. This will no longer fly. Lasting fame will not be snatched away—Elizabeth Taylor is a star forever, decades after being vital—but pop cultural relevance is decided on a minute-by-minute basis. There is no room for nonchalance.

It’s become more and more clear that older stars seeking to continue to matter must operate within a publicly acceptable creative and expressive framework or risk rejection—there are simply so many other choices available that trying something new might easily lead to failure. And comebacks like Mariah Carey’s (and like Mariah Carey) can be a bitch.

No one is a bigger star—and yet no one has done more to recklessly gamble her stardom over the years—than Madonna.

Skeptical of Madonna as maverick? Consider that in 2003, Madonna’s “American Life” single contained the lines: “I’m not a Christian/and I’m not a Jew.” She might as well have released a song entitled “Don’t Buy Me.” That could have doubled as the name of the album that followed—American Life was certified platinum but only sold just over 600,000 copies. Even in an age where sales expectations had been adjusted downward, this was a radical shift from the multi-platinum successes she’d enjoyed for 20 years through nearly all of her musical incarnations.

There were two major reasons American Life died a quick death on the charts: (1) The lead single’s video and lyric were too politicized for an America still hoping its support for invading Iraq would pan out; and (2) the music itself was jarring and didn’t bear Madonna’s sonic fingerprint. Ultimately, the song “American Life”—which got no help from a rap widely considered embarrassing—was so overwhelming that it became not only the first impression the public had of the CD American Life, but also the final impression.

Subsequent singles reflecting the diversity of the album fell on deaf ears, and follow-up “Hollywood” won no fans at Clear Channel with the line “music stations always play the same songs.”

The soundbite was that Madonna had traded fame for love, chucked fun for angst, turned away from the carnal and toward the cerebral—sold in.

Undeniably, Madonna had lost her mojo, which often has little to do with artistry. (I contend that American Life is more satisfying than its wildly praised predecessor, the uneven Music). She seemed to be operating on the assumption that her status as a superstar was secure enough to weather experimentation—in the past, some of Madonna’s most out-there musical reaches (raising holy hell on the rockin’ Like a Prayer, singing Sondheim Breathlessly, impersonating Eva Peron, embracing electronica while seeing the Ray of Light) had paid off handsomely. But the marketplace in 2003 was evolving. The Internet in particular had, over the three years since her previous release, devalued stardom and even music itself, making both downright free. This raised the bar in favor of the consumer and to the detriment of the unwary artist. Out of touch with the realities of what the mainstream desired and what her fanbase required, ill-equipped to address the challenges of cyberspace and, less cynically, simply in the kind of angry and uninviting mood that sometimes makes for great art but always makes for bad commerce, Madonna struggled to get her latest music into people’s hands and, for the first time in her career, to make her point.

Following 2003, Madonna fans worried that the former High Priestess of Fun had left that church in favor of Torah-thumping seriousness. Kabbalah had become Ka-blah-blah-blah and the Star of David a has-been for fans desperately seeking a diva.

Fortunately for us all, Madonna was born again—and not in the evangelical sense. It began with her $125 million-dollar-grossing Re-Invention Tour, in which she did something she’d once sniffed at—performed many of her biggest hits with gusto. The tour and her electrifying Live8 set were more a reintroduction than a reinvention, and they successfully changed the subject.

With Confessions on a Dance Floor, her eleventh studio album (I do count I’m Breathless: Songs From And Inspired By Dick Tracy but not the soundtrack to Evita), Madonna completes the thought begun by her Re-Invention Tour, revisiting her lifelong reliance on dance as the ultimate form of self-expression and in the process providing an excellent primer on club music, which more than any other kind makes the people, er, come together. It’s shamelessly self-reflexive, flaunting references to jewels from her canon, including “Everybody,” “Holiday,” “Papa Don’t Preach,” “Keep It Together,” “Frozen” and even her gutsy James Bond theme “Die Another Day,” which never received its due. Madonna cannily continues to shore up her base through other reassuring moves, too—camping it up with late ’70s styling, dropping into gay clubs, gamely riding a horse with David Letterman, revealing in interviews that she is in the mood to have a good time. With gay remix maestro Stuart Price at the production helm, fans will recall Madonna’s past fruitful collaborations with DJs, from Jellybean Benitez to Shep Pettibone to William Orbit. A DJ saves her life as indelibly feel-good lyrics from her catalogue like “dance and sing/get up and do your thing,” “only when I’m dancing can I feel this free” and “it’s called a dance floor, and here’s what it’s for” have finally come home to roost.

In short, Madonna is doing exactly what she needs to do to reassert her Queen of Pop status. Despite her avowed lack of regrets and the impression that she is willing to do whatever she wants without a care in the world about fall-out, perhaps Madonna’s greatest unspoken confession is that she does care, very much, what people think. But if that’s so, her most admirable trait is that she has so often—as was the case with American Life—refused to let that very human weakness matter. By relenting and giving them what they want, Madonna may have surprised even herself by cooking up what could very easily be one of her best albums, alongside the gold standard of Ray of Light and the emotional touchstone of Like A Prayer.