I'd seen it twice already on DVD, curled up with my partner in bed, wincing with recognition at the elements which have survived unchanged from short story to novella to novel and now to film. But seeing Boy Culture, the movie, for the third time really was a different experience—for the first time, I could truly assess it as an independent, creative project—something filmgoers at The 20th London Lesbian & Gay Film Festival had no problem doing; some loved it, at least one dude hated it, and it was chosen among the Top 3 of the fest.

For my third viewing of Boy Culture, there was lots of other amazing stuff happening, stuff that instantly contextualized the final film, and that made me feel like a human being for the first time in a long while. (I've been working myself to death—it's a long story.)

On Wednesday, my partner José Vélez and I hosted a party to celebrate the North American premiere of Boy Culture at the TriBeCa Film Festival. It was my way of offering support to the years-in-the-making movie and to the people who put in those years, namely Philip Pierce, Victor Simpkins, Stephen Israel and Q. Allan Brocka. I was pleased to have been consulted throughout the process (except for 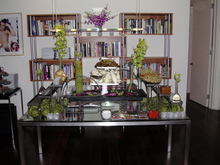 when they changed archetypical all-American "straight" white Andrew into a less familiar all-African-American "not-exactly-straight" black Andrew...a change I questioned after the fact because I'd positioned my novel as a schizo beach read/white-gay cultural critique, and thought Andrew's race change would leave the movie as only a filmed beach read), but consulting is not the same thing as making the movie—and while I'm a jealous lover, I definitely recognized that these guys really did have control and wanted them to know I felt they'd done good.

José and I have thrown precisely two parties in our life, despite having met at one. Or rather, seen each other at one. We laid eyes on each other at a party thrown by a lesbian couple in Brooklyn (one of the last times I was in Brooklyn), then asked our mutual acquaintances: "Who's that?" That led to group activities and then actual dates. He moved in a year later. But as for hosting parties of our own, we have a spotty track record. We tossed a bash in our two-bedroom Chelsea rental on West 20th Street, an apartment with a stunning view that we were paying nothing for, but which we could not afford to buy when it went condo at the then-astronomical-sounding price of $120,000. Now it must be worth $900,000 or so and last I knew it was owned by one of the founders of Flaunt. That party was well attended, but it was a chips-n-dip affair and I weighed two pounds more than the dude in the movie Heavy, which, remember, was about a fat slob.

Our next party was a seldom-discussed surprise 30th birthday party for me that José lovingly arranged. Surprise! You have no friends willing to come! Very quiet and awkward. I think my sister kept me busy by taking me to see Pitch Black or some other unusual-for-me movie, but I knew it was happening—José hates that about me. 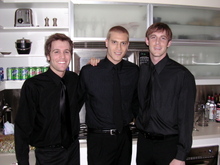 Flash ahead seven and a half years and I think we've got it figured out: hire a caterer. We used Laurence Craig (a phenomenal caterer and great guy—he practically held our hands through the process) and could not have been happier. To think that three months ago we had a bathroom in shambles and no kitchen, and now we had three gorgeous servers, a full slate of freebie booze provided by TriBeCa (thank you, Julian, the world's nicest drop-off guy) and a menu that included smoked salmon beggar's purses, goat cheese and roasted vegetable tarts and I-can-die-happy-now tiny fallen chocolate soufflés...it boggles the mind.

(<--L-R= Jonathon "Joey" Trent, director Q. Allan Brocka and Derek "X" Magyar.) We'd spent weeks trying to figure out who to invite to the party, and wound up with the perfect mix of people we knew ("we" meaning the filmmakers as well as myself), media types and potential distributors. People seemed to have a blast, got to meet and chat with two-thirds of the primary cast (Darryl "Andrew" Stephens was filming and could not come) and with the director and I believe a few phone numbers were exchanged. It's hard to believe it went so well and so quickly. People complimented our new apartment, and we were in need of the support—it's been a long process and you really don't know it it's come together until you get some outside opinions. So that was a major relief.

(<--Here I am with Allan.) I was glad to see Allan and congratulate him in person on the film. I'd only met him once before. His blog mentions he felt underdressed but he looked like a cool indie director and while he may have been jet-lagged, was very charming when asked repeatedly those same questions everyone asks directors. Must say Jonathon

"Joey" Trent (-->) was really sweet. I had already e-mailed him that I felt he did a top-notch job and he seemed to be sincerely touched by this and heaped praise on me for the book. Was he the first or second hetero man to have read Boy Culture? I don't know, but he clearly did his homework—how he was able to play the cheerfully slutty, unapologetically flamboyant Joey I'll never know. His manager, Nina Kether Axelrod, was equally kind, telling me she loves writers and had been very interested in meeting me. This is coming from the daughter of the man who wrote The Seven-Year Itch and The Manchurian Candidate, so it was quite surreal.

Derek Magyar, X himself (-->), arrived fashionably late (and fashionably—he appears headed for men's fashion magazines as his star rises) with his "boy" Dustin. Straight guys are able to say, "This is my boy," and make it sound tough and non-sexual. Dustin's an actor and friend of Derek's, and will star in a play Derek's directing soon in L.A. I think it's a foregone conclusion that Derek will become a major movie star. He has great charisma and intensity and wonderful people around him—but in talking with Dustin, whose last name I must get, I have to say he is equally magnetic. I told him I felt I'd met a future star and I meet a lot of actors and don't say that just for kicks. I'll have to write something for him. I guess if I can invent a way not to sleep?