I'm a huge admirer of Q. Allan Brocka, director and writer of Eating Out, but that debut feature was not my cup of tea. I really wasn't overly excited to see the sequel—it's kind of like how Mission: Impossible disappointed, so why would I want to see Mission: Impossible 2? And yet, like that other franchise, I found myself—impossibly?—falling hard for Eating Out 2: Sloppy Seconds. 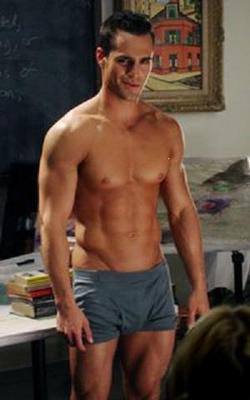 Co-written by Brocka and by the film's newbie director Phillip J. Bartell, EO2 has the distinction of being the first gay sequel in history (American, that is, thanks to the La Cage Aux Folles trilogy in France), but it has other distinctions that any film would covet: It's confidently directed, has uniformly fine comedic performances that match and complement each other in tone, has a top-notch score and looks like a million bucks—even though it probably cost a fraction of that to make.

You don't need to have seen Eating Out to appreciate E02, but you've seen it anyway—it's a wildly successful film, thanks to the buzz it generated for a phoned-in three-way and some thank-you-God full-frontal by Desperate Houseboy Ryan Carnes. But E02 stands alone, diving right into a mess of characters united in their obsession with sex who are nonetheless distinguished from one another by their own individual quirks: Emily Stiles (now Emily Brooke Hands) returns as Gwen, who really wishes the guys she sleeps with wouldn't be too uptight to have sex with men while she watches; Rebekah Kochan returns as Tiffani, an oral expert who can tell how long it's been since the penis she's sucking has fired; American Idol contestant Jim Verraros is back as ugly duckling Kyle, though with his makeover "taking" by now, it's going to be increasingly hard for him to play that kind of part; and it's hard to overlook newcomers to the series Brett Chukerman as Kyle's snarky ex- and Marco Dapper as the eye candy with a hard-on of gold.

There are sexual situations galore and enough raunchy humor to do John Waters proud (speaking of whom, Mink Stole pops up as Kyle's mom), but the plot thickens with a savvy satire of the ex-gay movement, which is being spearheaded at school by a right-wing hottie, played by former teen heartthrob Scott Vickaryous. Instead of being lazy and letting the sex sell this project, Bartell and Brocka have seeded the script with hilarious one-liners and observations that, for the most part, are not the familiar ones you'd expect from a gay sex comedy. The characters and the script—not to mention the snappy editing—make E02 feel like a European sex farce. 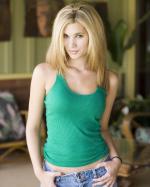 Everyone from the first movie has improved tremendously, but Rebekah Kochan demands singling out. In Eating Out, she was a bit more slovenly and her performance forgettable (at least by me). In the sequel, she is a svelte bombshell and her timing informs and fully exploits every line she utters and every situation she's in. It's impossible to believe she won't get good work from this gig; it's like the first time you saw Jennifer Coolidge...but if the first time had been early enough on to help make her a leading lady instead of an in-demand character actress.

Marco Dapper is also a surprise, and the charm he brings to his role—not to mention an unexpected fluidity as an actor, considering his chiselled appearance—is a further credit to Bartell. Dapper out-James Deans James Dean and makes Matt Dillon look homely. His acting ability is evident, but if it hadn't been, his talent below the belt (revealed in one jaw-dropping scene) would have guaranteed that the future DVD would be like low-hanging fruit to gay consumers.

Along with the main cast, there are seemingly countless other actors who get screen time and who live up to the high standards of the low comedy. The sex is hot, too—and it's not just about gratuitous nudity. Whether the actors are simulating sodomy (I bet Vickaryous's fans never dreamed they'd see him take it up the ass so enthusiastically in a Port-A-Potti), sucking each other's nipples or feigning orgasm, it feels real, racy and erotic. The tone is best summed up by a question that arose during the Q&A panel afterward, when a female audience member asked, "Is Marco Dapper really gay? Because I'd like to hit that." (He's not, but two of the cast are openly gay while some others appear to be openly closed.) 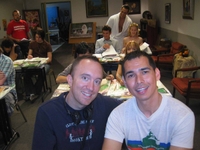 So what's wrong with Eating Out 2? Nothing serious. The audience I saw it with (the first of two screenings at Outfest this year) laughed easily and consistently throughout and gave it rousing applause when it ended. The film peters out for a stretch toward the end, which made me wonder if it would all fall apart. But despite that brief departure from what is otherwise a not-so-guilty pleasure, it's able to end in a most satisfying and unexpected way. Brocka has already gone on to direct Boy Culture (by way of full disclosure) and is doing an animated series for Logo based on his popular Rick & Steve: The Happiest Gay Couple In All The World short. If Bartell doesn't go on to direct a major project after this, then the studios deserve their current slump.