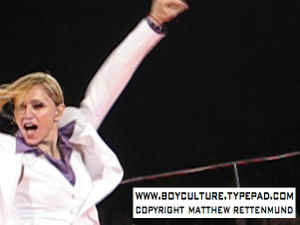 I'm cheating. I have tons more Outfest items to post, including an Awards Night recap that has

But as a quickie break: I went to my fifth of six NYC Madonna gigs tonight, so let me bang this out:

I sat by two cool chicks and one sweet Brit (he is seeing the show a total of 16 times, including all eight Wembley gigs, L.A.'s opener and who knows how many others). We were in Section 2, Row X, and I was in Seat 4 (only until the show began, and from then on was on my feet not on my seat). It was a sweet seat, again affording me a superclose view. Problem: The security people had hard-ons for us on our side, letting the opposite side fill up occasionally but bullying us into standing quite close to our seats. I'm sure they let Leonardo DiCaprio and Lukas Haas (in that order) move about freely; they were escorted in and out by Madonna's handsome team captain Guy aka "Sigh!" Oseary and walked right past me. Leo is so tall and solid, and wore a DiCaprio to cover his face.

A crazed black fan with a fro, a harmless queen who kept wandering close to the stage, was tossed out—the first ejection I've seen despite some who were begging for it, and yet some blonde ho-bags who were doing a Basic Instinct dance for the fat fuck of a guard were tolerated and then allowed to the front during the finale. God, men are so obvious. "The only thing I have against women is that men aren't more like them." 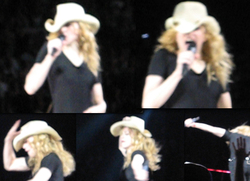 I will be posting images from all six shows, including some supercool video footage (wish I had video frottage), along with a formal and by now quite carefuly considered review of the show soon. But for now, suffice it to say that the crowd was dead (anyone seeing it for the first time in NYC is not as feverish as the ones who did anything and everything including prostitution to see it the first few dates) and yet Madonna's never been more alive. She was ultra smiley tonight, looks thicker (in a positive way) by the hour and rambled on about how she's playing MSG 20 years after her first time, when people told her she couldn't do it. (Paraphrasing here.) She added to ignore anyone who says you can't do something: "Fuck those fuckers!" She even donned a cowboy hat—and they said it couldn't be done! More self-righteously than ever, 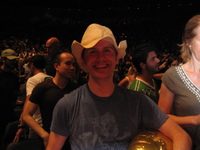 she said, "I hope you people know how lucky you are to be alive!" (or something to that effect) and mentioned our friends in the Middle East: DEAD SILENCE. I guess Night Five's crowd was uncertain who she was rooting for and probably didn't care if the entire Middle East goes up in smoke as long as she sings "Hung Up" at the end of it. Kudos to Madonna for trying. Karma dictated that the aforementioned cowboy hat fell into the hands of a truly adorable guy who danced his ass off (not off, but up and down and around and around...was getting motion sickness watching) the entire concert. That is the way it should be: Congrats, Jason, you earned it. (He's pictured here.)

Speaking of karma, a good friend of mine is refusing my only remaining extra ticket for tomorrow, stating (even though he feels Kabbalah is "Ka-blah-blah") that he doesn't deserve it and it's bad karma for me not to give it to a deserving fan who would not otherwise see the show. He's a nice guy—though he delusionally thinks he is a cub when in reality he's just a hairy twink with biceps—and a smart guy, but I need to dissuade him on this karma thing. Okay, ready?

If karma exists, meaning you're paid back for your good and bad deeds, then there are three possibilities: (1) The universe is necessarily run by a malevolent and not a benevolent force, since no one in any lifetime could deserve to be born in Darfur or into starvation or with AIDS, to cite but three examples; or (2) The universe is an illusion—a benevolent being runs it, but all of the tragedy out there and the pain are phony, and each real soul, like yours for example, is exposed to individual, phony worlds in order to test its mettle. In this scenario, all the billions of people in the world are real, but only one of them is real in each of a billion alternate realities; or (3) There is no order to the universe at all. It's all meaningless. From where I stand, all three possibilities—which is your fave?—say, "Take the ticket, Twink."

Again, look for pix ASAP, and keep reading for tons of Outfest introspection. Until then, a cheated video still from a previous gig, shot by me.