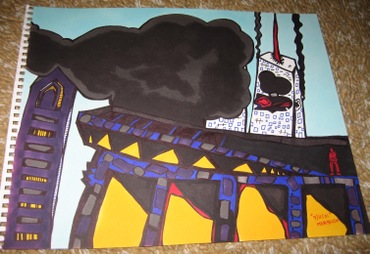 As a kid, it was said I would grow up to be a famous writer. But in high school, I wanted to become an artist. I had technical ability and could copy photographs realistically, but my art preacher converted us to abstraction and I pursued it with the conviction of a new convert. I began drawing loosely interpretable items straight from my brain, allowing sexually revealing (I wasn't out as gay yet) and personally downright exhibitionistic forms to choke the pages of my sketchbooks. I specialized in minutely detailed, sometimes nonsensically geometric designs, starting out in black-and-white and graduating to lurid color. It was my desire to attend an art school, but I was dissuaded. I continued to draw—my feelings and attention to myself. I used what talent I had (which is arguable) to express and invite. Gradually, with no goalposts in sight since I was going to school for writing, my drawing tapered off. My last major spurt of creativity in that realm was around ’92 to ’94.

On September 11th, 2001, I worked at 462 Broadway. In retrospect, I certainly wasn't close enough to the World Trade Center to have been in mortal danger, but this was not obvious at the time. My memory of the day was that the evening before, I'd met for dinner with a business associate and a rock group I was covering. At least one of them and the associate and I had discussed getting TKTS tickets to a Broadway show, and the thought was that I might do the dirty work. I remember contemplating whether to buy the tickets at the Times Square or the World Trade Center location; I was more familiar with the former, and it was a straight shot on the subway, but I was far closer to the latter. The friends never got back to me and I never got further in my plans.

That morning, I was working when I heard a commotion. The receptionist (and apparently many of the others on my floor) had heard a loud buzzing and some had looked out the window in time to witness the first plane hitting the WTC. I hadn't heard the buzzing, lost in industry, but the gaping hole in the tower was plain to all of us. It was so close and yet so distant, it was hard to know what to make of it except that I instantly wondered if the people in that area of the building could possibly be saved. We saw tiny dots that could have been people at the windows, and news reports conjectured a small plane had collided with the towers. I recalled stories of this happening to the Empire State Building a million years ago, like shortly after it was erected, but it seemed unbelievable that with the technology of the day it could happen by accident again. We hoped it was an accident, but some realists were already saying the T word.

As events unfolded, I watched with everyone else from a large window at the back of the building. The window was like a giant screen, and the smoking tower looked for all the world like a fake backdrop in a movie, except very crisply real. The day, as everyone will tell you, was one of the most supernaturally gorgeous September days you could want, so the sky was electric blue, throwing the tragic situation into stark relief. Against all odds, I had my camera with me, and took some panoramic photos, reproduced here.

People started worrying about acquaintances, and soon enough the news began to belch horrible rumors, all later confirmed to be true, about the Pentagon. When the second plane hit the other tower, it was not from an angle that could be seen from our vantage point, and yet I knew something had occurred because the giant pane of glass shook with a muffled sort of pressurized pop. I assumed something in the blazing fire had exploded. Hearing it was another plane confirmed everyone's fears. I remember saying that the planes had to have been hijacked and the pilots killed because no pilot under any amount of duress would willingly fly into a building, even at gunpoint.

I called my mother to reassure her—I was shocked she hadn't called me already since she worries when she hears about bad weather in the New York area. She was calm, which made me fear people outside the city didn't quite know the horror of what was probably happening despite the wall-to-wall worldwide news coverage. I cried a bit as I told her I was okay. I reached my partner, who was similarly cool, calm and collected, but I urged him to take off immediately, thinking that the place where he worked—a cultural landmark—might be a target.

I didn't see the first tower fall, and when told of it by a friend I said, "Maybe just part of it fell, right?" It seemed hard to imagine the whole thing going. I'd been to the top a year or so previously, gotten my picture taken there, pressed myself up against the glass and assessed what a terrible drop it would be. I watched the second tower and when it appeared to shift I called out that it was going. Then it went. It looked like a planned implosion that you see on the news all the time, or in action movies. At that moment, we were conjecturing a good 20,000 people may have perished in the past several minutes and wondered just how concerted the attacks were, never guessing it would come down to less than a dozen guys armed with rudimentary weapons, flight-school diplomas and the intimidation-factor advantage of doing something for the first time.

Around this time—and a while had passed—I suggested we should all head home or to my home if anyone lived outside the city, since we could smell the smoke and who knew what might be in there? Perhaps the planes had been loaded with radioactive waste or other toxins? A group of us left and walked to my apartment, which was way over and up, in Chelsea. Along the way, we were "treated" to a shockingly unobstructed view of the smoky ruins, passing stunned and occasionally animated office workers marching (not running) away from the wreck that was Lower Manhattan. People were gathered around cars with radios to catch pieces of news on their way home or at least out of the potential line of fire. Grocery stores were choked with people buying...well, everything. I grabbed a week's worth of groceries, thinking I'd be hosting my co-workers for days.

The first part of the journey home, the entire area was being littered with bits of paper and debris, which we knew instinctively were from the reams of paper detonated in the death of the towers. That's what it was like—like a person you knew had died unexpectedly. It was a sick feeling of surprise and acceptance that yes, this was not usual, but there was no good reason this could be called impossible.

At home, a friend said he'd overheard talk of anthrax and other theories, but by the end of the day everyone had been able to get home. Now it was time to absorb all the news, put two and two together, wonder where the president was, eventually come out and see the handmade "have you seen...?" signs and reflect on if this event meant the end of anything good or the beginning of everything bad. 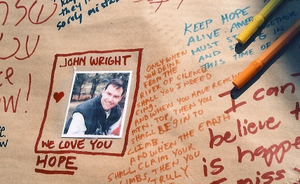 I don't feel strongly connected to 9/11. I did see it happen, but I know others who saw it from far closer up, to the point where they saw people falling, bodies impacting. Friends of friends died in the building. So I feel lucky (not blessed; from my POV, that is offensive to the ones who died) to not feel strongly connected. But I feel connected enough that when tourists visit NYC and immediately ask all about what it was like that day and how to get to Ground Zero, I'm seriously offended and grossed out and impatient. In the immediate aftermath, I remember telling a few inquisitive types what I recalled from that day and their eager expressions gave me the impression they almost regretted having "missed" it.

I don't like grief tourists. If you lost someone on 9/11 at that site, I can certainly understand the desire to visit Ground Zero. But if you didn't have any other connection besides being an American or a human being—ways in which we're all connected to it—I think you should examine the depth of your need to pay a visit. I for one—and I may be the only one—don't welcome you to the city for solely that purpose.

The day after the disaster, I went back to drawing. I had a pad left over from failed efforts to get back into it and I immediately drew the image that illustrates this post. It's a bit simple for my usual style, but I was getting simpler as I got older (and blinder). It's the view I had out that massive window on 9/11, showing a slightly taller building across the street from us and the towers beyond. I couldn't state with any degree of certainty just how accurate it is. But it's not far off if you allow for artistic license—it's a lot closer to the truth than The Path To 9/11 (which is on now) is, that is for sure. Until I looked at it again just now for the first time since I drew it, I had forgotten that there was a man on the roof of the other building watching the destruction. But I never forgot that bizarre hole in the tower, and I had never forgotten how to draw in a way that suited my need to document something in my brain.

(P.S. In posting these images and my drawing, I am now thinking...there was no one on the roof of the other building watching. I don't see him in my photos. I think it might have been that I felt I was out there watching myself, alone and unprotected. I'm grateful that I have the real and the imaginary record to enhance each other.) 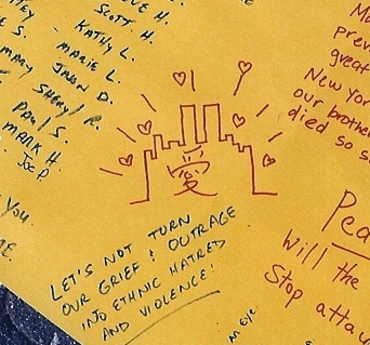