New York's legendary Roxy is no more. Going into Chapter 11 in December apparently was not enough to help the struggling institution, which will join CBGB in transitioning to the memories of New Yorkers, and which has been seized and shut down tight. Word has it the club would need to cough up $300,000 to the state to make a comeback, and staffers have been told to prepare for the worst—a press release will be out in a week.

I knew of The Roxy even before I visited New York, let alone moved here. It occupied a fantasy space in my mind where I would arrive and be the center of attention. As a kid, I thought it would be cool to be the life of every starry party—like Truman Capote. Yes, I was a wannabe, and that was a part of my life that is so repulsive and dark that I've been warring against it all of my adult life...to coin a phrase. I knew Madonna could be found at The Roxy, and that was all I needed to know.

When I showed up in New York, I totally by accident moved to West 20th Street and 9th Avenue, just a few blocks from The Roxy. Getting there past unimpressed project thugs was a bit like a human game of Frogger, but once inside, the place lived up to my expectations. The place did, I didn't—I was never the center of attention there, and never could be in a room full of shirtless go-go-boy-ready dance buffs. But as small as it was compared to some of the Chicago clubs I'd been in, it seemed to go on forever and be filled with endless possibilities. It had a dirty glamour and it had, above all else, a great big dance floor. I remember seeing MTV's John Norris there and realizing this was as close to Capote as it would get. I remember seeing other guys there who I'd seen elsewhere in the city and thinking, "Oh, he's like me...?"

But I didn't go to clubs to find men, I went to dance. Of course, men were found and mistakes were made. 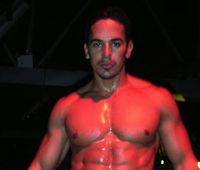 The Roxy's go-go boys were famously shameless. (From westhollywood.com)

I remember being there one time—and if this is gross stop me—and being picked up by a really sexy boy who was in town from France. Strictly bridge and chunnel. Spoke almost no English, so there was no masquerading what we had in mind when we began attempting to mime to each other. We danced a little and kissed and my apartment's proximity to the club never came in so handy. I felt very hot to have been scooped up like that. I was young enough to still be impressed by the attention of men; this was before I realized men are not that discriminating. Actually, it was only a few hours before I realized men are not that discriminating.

Cue fireworks as we lay down on my futon mattress.

The next morning, after an optic mishap that goes down in history as one of my least thrilling sexual finales, we attempted to speak more and he communicated to me that he was bisexual (wow, I could have used that information earlier...I'd halfway bagged a straight man???) but that he tended to sleep with men. "Why is that?" I asked. "They are easier to find," he said. This was when that aforementioned realization was made. God, he could have left a twenty on my nightstand and left me feeling less sleazy. Except I didn't even have a nightstand and really could have used that twenty.

He gave me his address and I remember I sent him something...a creative postcard, also some kind of kitschy I HEART NYC memento. Nothing came back to me except the use of that injured eye I alluded to.

The Roxy made me a lot of those things back then, even though I'm the least clubby kid around these days, preferring Seinfeld reruns to standing in line on W. 18th St. between 10th and 11th Avenue, and I haven't gone dancing in a decade. But I'll miss The Roxy. Knowing it existed and might seduce others like me has been an oddly comforting feeling all these years. Knowing it will vanish is as heartbreaking as the end of your absolute favorite song of the moment.

Hopefully, a new one will start soon, and be better than the last.

Historical footage of Madonna performing "Everybody" at The Roxy in 1982.