Notes on a Scandal Comments (9) 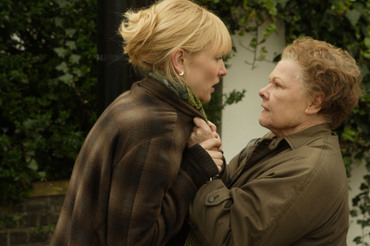 I told an acquaintance that I’d just seen a great Judi Dench movie. Her reaction was that she wasn’t interested if it was a downer. What constitutes a downer—a movie whose themes are so relentlessly dark they con you into thinking the world is far worse than it is, or one whose themes are so realistic they force you to doubt the fantasy world where everybody lives, nobody cries and we really can all get along?

I guess both are downers. It just depends how far up you are to begin with.

I can understand moviegoers who roll their eyes at brutal Nihilism; though I’ve seen some great, gritty flicks of that ilk, I’ve seen a lot more pretentious examples of the bleak-chic genre.

But I’ll never understand why anyone with a brain and without serious issues of some kind would object to a dramatic film that does not shy away from the shadows of the human experience. I like to learn, and knowledge—while always handy—is not always a mood enhancer.

I think it might boil down to how we see our fellow man. People who think there is goodness in every person are likely to be the ones who don’t want to pay to spend a couple of hours being reminded, either realistically or surrealistically, that theirs is not a very sensible theory. Those of us who think there might be some goodness in most people, but that more to the point the word “human” is a synonym for “flawed,” are the ones who enjoy a good cry, a good fright or a good couple of hours with our stomachs in knots in the cinema.

We’re not brave, we’re just not scared; there’s a difference. 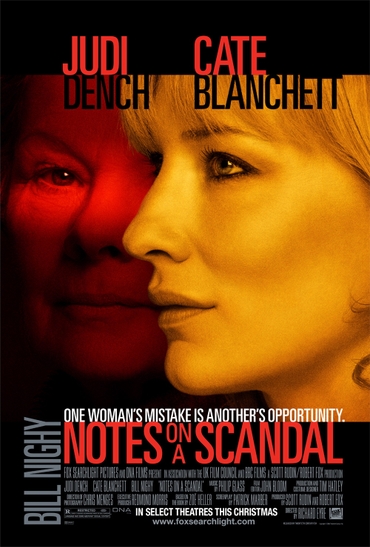 The great Judi Dench movie I saw a couple of nights ago is Richard Eyre’s Notes on a Scandal (Fox Searchlight), adapted from Zoe Heller's novel, and while some people have called it an art movie, I think it’s a very commercial movie with an arthouse star and a lot of British accents; there is nothing esoteric about it. In fact, its plot is as easy to grasp as reading a tabloid—its titular scandal involves Sheba Hart (Cate Blanchett), a beautiful blonde school teacher of 35 or so who sleeps with Steven Connelly (Andrew Simpson), a 15-year-old male student. The twist is that her closest confidante at the school, the film’s obscenely dry narrator Barbara “Bar” Covett (Dench), is secretly sexually obsessed with the scarlet woman herself despite being twice her age and exceedingly conservative.

Bar’s the kind of woman people are referring to when they say, “Oh, she’s probably asexual more than anything.” They never are.

This story could easily have been homophobic—had it been made a number of years ago, it would have been. But it’s not. If anything, it’s the type of movie that should scare any gay person straight out of the closet for fear of winding up like Bar.

When they first meet, Sheba is a newcomer to the rowdy public school where Bar has worked for decades. Sheba, a bohemian (Bar notes with disdain), intends to teach art after spending 10 years looking after her daughter Polly (Juno Temple) and son Ben (Max Lewis), who has Down’s syndrome. Bar is magnetically attracted to the woman, embarrassingly so. But we’re only able to be embarrassed because much of the film is given over to readings from Bar’s wildly expressive diaries, her notes on life, lack of love and, eventually, a scandal—without them, we would never guess Bar’s feelings for Sheba in that she appears to the naked eye as nothing more than a stern, humorless old bag—mind the gap between what Bar communicates publicly and what she writes in private, it’s a doozy.

Bar takes Sheba under her wing and Sheba takes Bar incautiously into her confidence, confessing to boredom with her marriage to a much older man, Richard (Bill Nighy), her former professor. Sheba does this because she is nakedly vulnerable, but Bar interprets this confidence and nearly every other gesture of Sheba’s as a none-too-subtle sign that the women are meant to be together forever and ever. 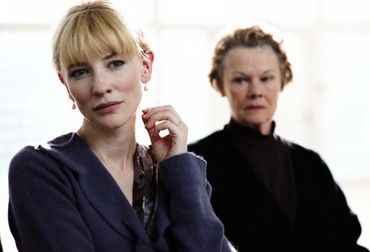 Their cozy companionship comes crashing down when Bar catches Sheba in the act of fellating Steven and find out the two have been having an affair since even before Bar met her. Hurt (and unable to acknowledge it, in the same way she’s never acknowledged her lesbianism to anyone), Bar confronts Sheba and uses this further shared intimacy to firmly affix herself into Sheba’s inner circle—into her family, really. She becomes a fixture in the Hart household, and feels secure that Sheba has taken her advice and broken it off with Steven.

Of course, they never break it off when they say they will and Sheba’s no exception. She is too satisfied with her taboo encounters with Steven to end it when she feels she can just as easily keep it up, albeit more discreetly. But nothing escapes Bar’s watchful eye—nothing except for everything meaningful about her own true self. 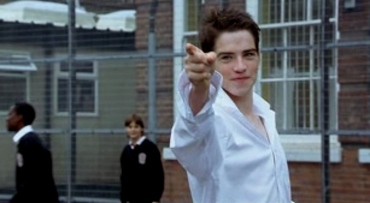 When Sheba continues her affair and chooses her own family over Bar’s continuous need for attention, Bar’s revenge is to start the rumor that will launch the scandal that will splash Sheba in all the newspapers. It’s only at this point when the two women can deal with each other frankly.

Ultimately, Notes on a Scandal is like the thinking woman’s Single White Female, enjoying itself as it lays Bar’s ridiculous, even adolescent passions bare, only to nudge them into equally infantile actions of revenge. But the fact that it’s a good popcorn movie doesn’t diminish its intelligence and insight. 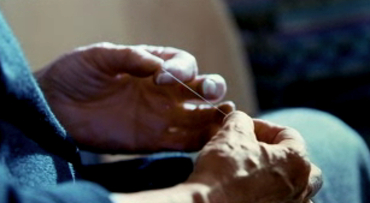 Dench’s performance is impeccable and will earn her another much-deserved Oscar nomination She sinks her teeth so firmly into Bar Covett you will have a hard time forgetting her in this role. Every gesture, every physical choice, is dead on and dead scary. Bar is capable of being utterly malicious, as self-centered as a sociopath, and yet beseeches her adored with the small, bright eyes of a cat, just like the one who is keeping her company in her old age. And like a cat, Dench’s Bar is capable of purring appreciation or an unexpected scratch of the arm. Her most vicious scratch? When she growls, “You’re not young!” to eviscerate Sheba, to make her feel she has fewer options, to make her believe she is on the same level as Bar and consigned to the same fate. 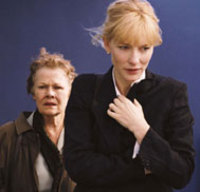 Blanchett is luminous as the conflicted school teacher with a misguided attraction to her pupil. The script explores what might really happen behind the scenes during a sex scandal of this nature, rather than simply condemning all parties involved. “I didn’t like any of the characters” will be a common refrain because as much as we are meant to relate to Sheba, she makes foolish choices. The film bravely humanizes her and almost unbelievably revels in showing us their passionate make-out sessions and sexual couplings. Nothing is actionably explicit, but 36-year-old Cate Blanchett does share steamy kisses with 16-year-old Andrew Simpson, something I felt the filmmaker went out of his way to force us to watch. I think it was supposed to disgust some and titillate some. Sheba’s moody husband exclaims when he finds out, “Everybody wants someone young at some point...but they deal with it.” It’s a risky statement to foist on an audience unable to say, “No, wait, not me!” and I think it will engender some resentment. Like I said, get ready for, “I didn’t like any of the characters.”

The movie has some flaws, some less than believable moments, but nothing that seriously detracts from watching actresses at the top of their game diving into an edgy, racy script with abandon. Simpson and Nighy lend fine supporting performances, and the score by Philip Glass is just right. 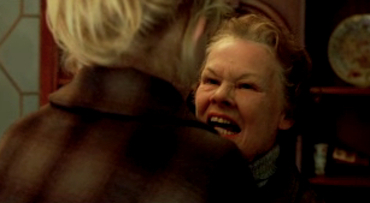 The night I went, I was surprised to find that many other gay bloggers had been invited (along with the actress Polly Bergen, who was being showered with compliments by a very famous, and apparently very fannish, critic). I didn’t actually introduce myself to any of the other bloggers—any fears you have about approaching a public figure with the old, “I love your work!” are compounded when you’ve just watched a movie about a fawning stalker—but I did not notice many if any lesbian bloggers. This made me wonder if the lesbian reaction to this film will vary from the gay male reaction. As I wrote, I think it’s clear that Bar’s psychosis stems from her inability to simply be an open lesbian, to allow herself what she wants. But it’s possible some lesbian viewers will see her lesbianism as the villain—and their notes on Notes on a Scandal could be more along the lines of some of Bar’s best zingers.