Terrence McNally could get anything produced on Broadway, but that doesn't mean he should.

In the case of his latest, the Michael Blakemore-directed Deuce, I would not go so far as to say this tennis-themed show is a double fault. It's more of a frustrating deuce itself—great exercise for two women at the top of their game that nonetheless struggles to produce a win. 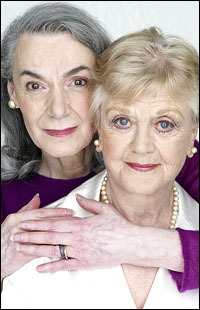 I got tickets for tonight, the very first preview, and was hoping to be wowed. Quadruple Tony winner Angela Lansbury is returning to Broadway for the first time since the ill-fated revival of Mame almost 25 years ago, and Marian Seldes is one of our most distinguished living theatre actresses. Along with a sensational pedigree, the show was said to be about living-legend doubles champions reunited after many years, so I was expecting a lot of tension and verbal volleys culminating with one or the other figuratively jumping over the net in victory.

Instead, the show revealed itself to be an easy-to-watch if somewhat static snapshot of two old friends and athletic partners conversing about their past glories, disappointments and personal entanglements with relaxed detachment. Where I had hoped for a terse, wrenching tournament, I got a genial exhibition match. 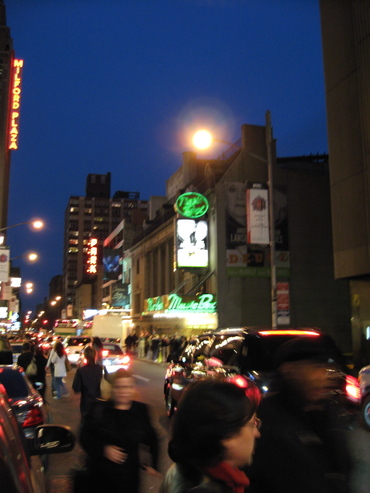 Love this busy picture of the theatre from a distance.

The setting ensures a show that can’t sustain an intermission (it was about 90 minutes straight through)—the women are reunited as the special guests of a championship match, relegated to history, to watching from boxed seats as younger women slug it out in the game that made them famous and defined their lives together and apart. It’s a wonderful premise, one rich with possibilities that go largely unplumbed.

Both actresses are terrific at creating characters from dialogue that, like the play itself, is too literal to truly capture interest. As Midge Barker, Seldes has an arch self-containment tempered with streaks of practical good humor. She might seem prissy at first, but she has her secrets, as when she fantasizes about throwing her old partner for a loop, reminding us that she’s more than just half of a pair. 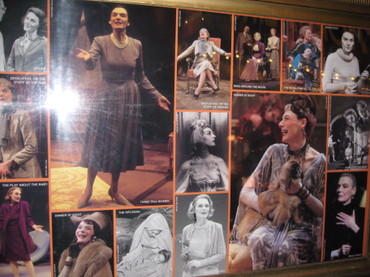 The Seldes wall of fame outside the Music Box Theatre.

Lansbury—looking lovely and only occasionally muffing lines to no great consequence—has the showier role. Leona “Lee” Mullen ‘didn’t used to be a fashion plate so much as a dish’ and has strong opinions on the game of tennis, the usefulness of feminism and her own shortcomings, all of which she punctuates with well-placed “goddamns.” 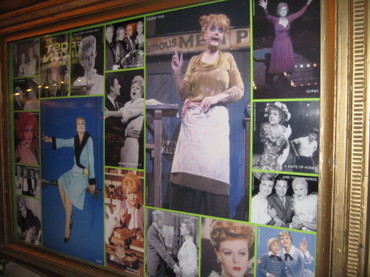 And also, the Lansbury wall of fame.

If the actresses are spectacular, their interaction is no spectacle. Instead, the play has the too-easy feel of reminiscing, something Lee abhors. At one point, Lee says to Midge, “You didn’t marry down—you married a son of a bitch.” It’s a line that should be spiked with the dual meaning of a reassurance and a barely suppressed put-down, but when it’s delivered it’s neither—it’s simply a statement of fact.

Complicating matters, and getting in the way, Joanna P. Adler and Brian Haley appear as one-dimensional sports announcers, whose obnoxious narration of the match seems to be meant to reveal how far the game has sunk and how clueless the younger set is about the innerworkings of the older set’s minds. The characters are not needed and bring the proceedings to a screeching halt every time they chime in. Veteran Michael Mulheren appears as a lifelong tennis fan in one touching scene, but it quickly degenerates into a sort of dry history lesson as the women thumb through his inherited autograph book. His other appearances undermine the visual impact of the women we’ve come to see.

I think Deuce could be vastly improved if it were what its title implies—a two-woman show.

I would make some cuts and focus completely on the two women, inject a little more uncertainty to their reunion and hit harder the eventual dual revelations that Midge never felt liked by Lee and that Lee always felt she’d let Midge down by double faulting in the Australian. You can’t make me believe that 30 years after their sudden retirement, and 50 years after they first began to set the world on fire, these two old broads would not have more baggage to unpack, and you could not find two more supremely gifted actresses to unpack it for our amusement and edification.

All of that said, I think everyone involved should be proud of being part of a literate original play that tries to understand a pair of women whose real-life average age is 79.5. Also, Mulheren’s character says toward the end something to the effect of, ‘Look at them. There will never be two more like them,’ and the parallel between two celebrated tennis pros and two brilliant thespians is perfectly clear—how can you resist coming to see if Seldes and Lansbury have still got game?

Check out Deuce when it officially opens May 1.

After the show, the audience did not roar with approval but applauded respectfully. I then did something I never do—I went to the stage door. I’m so glad I did! The most interesting part was watching the fans directly across from me, particularly the cute guy who was absolutely beside himself as the women emerged and interacted with him, and the most exciting part was when José and I recognized Celeste Holm (who turns 90 on April 29) being escorted into and out of the backstage area.

Michael Mulheren came out and chatted with an acquaintance in the autograph queue, revealing that there will likely be cuts to the show, but that presents a problem with a tennis match going on throughout—experts need to make sure the action of the invisible game proceeds naturally so the score doesn’t jump around. He also said the first time he heard Seldes and Lansbury using the c-words and f-words that are in the text (and that neither uses very convincingly), he just sat back and giggled. “I think Terrence wrote the play just to hear them say those words,” he joked. But he followed this by saying that once during rehearsals when Seldes messed up a line, she said, “Whatever the fucking line is...I bet you all never thought you’d hear me say that.”

After some time and some rain, Marian Seldes emerged. It’s hard to believe she is almost 80. She’s very tall and thin and cuts a striking figure, and yet her demeanor is that of some kind of benevolent spirit. I know it’s weird, but it honestly felt like we were being touched by a saint. When asked if she was having “so much fun up there” in the show, she said graciously, “Oh, yes...to be with her?” She stroked one fan’s face and politely asked one woman if she wanted her autograph personalized. “Yes, please, to Sarah.” “Sarah with ‘a-h?’” She is apparently famous for signing her name as a tiny scrawl, at one point joking, “That’s why I never went to school—can’t sign my own name.” When the security guy had to bark at some of the nutso fans (you know the ones) who were in the way, Marian’s eyes sparkled and she murmured, “Let’s be nice to people...let’s be friends...this is the theatre! It’s my utopia.” What a charming lady.

When Angela Lansbury appeared, a short hoot went up and then the fans seemed too stunned to even clamor for her attention. She signed quickly and decisively and said, “Thanks for coming!” Again, she looked fantastic. “Welcome home, Miss Lansbury!” exclaimed a geeked fan behind me, which is exactly the right thing to say in that moment. “It’s great to be back...on Broadway,” she replied with a broad smile. Both she and Marian signed every autograph requested and had instant PUCs (personal umbrella carriers). The only difference between the two was that someone had to call a cab for Marian as an afterthought, while Angela had a car at the ready. Celeste Holm walked.

It was a lot of fun. My only regret is that a guy associated with the production who works in my building probably saw me at the stage door and probably now thinks I’m some kind of bonkers fan. I’m not shy to be seen as a fan, but in this case, I just have a hungry blog to feed. 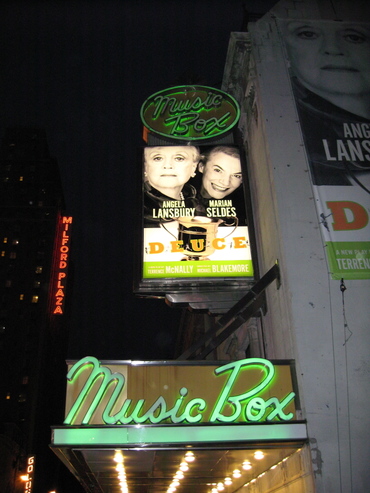 The Music Box, heavy with Deuce.