A Fight At The Museum Comments (0) Black Point on May 27, 1989, when Jane's employees visited one weekend. Even then the Petersens were down with opening their home to the lower classes...namely, me.

My first job in college was one I found flipping through some binders at the University Of Chicago. The listing seemed impossibly perfect—surely working for a literary agent on Michigan Avenue had to be more edifying for an English major than, say, handing out towels at a gym. I interviewed for the job, in the quaint Fine Arts Building, and got it—I would be working for renowned agent Jane Jordan Browne.

Jane was such a larger-than-life character to me. She was a tough-as-nails working woman, a blue-blooded John Birch Society conservative with a California bohemian streak, a living former rival of Sylvia Plath's, a doting wife who'd married late in life and skipped children, an admirer of Ken Russell movies, a white-haired dynamo who knew publishing better than she knew the back of her own hand. She was painfully hard of hearing and so kept, among other colorful topics, a file marked "DEAF," and she stole furtive drags from cigarettes in much the same way our current first lady did until recently. She would sometimes paper clip her hair out of her face and had no problem working on a folding card table until it was brought to her attention that she could stop being industrious long enough to allow the installation of a new desk. 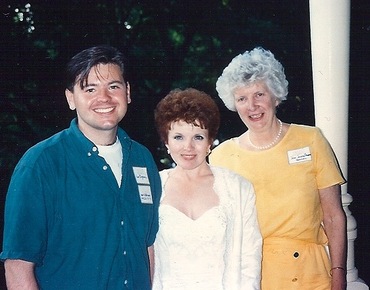 Me with glam romance author Sherrill Bodine and the lady of the house herself, Jane (Jordan Browne) Petersen. We were on the porch at the big house at Black Point for an RWR party, circa 1992.

They didn't have people like Jane where I came from.

I grew to love Jane, even though my earliest days working for her were marked by scoldings. I deserved them—I was used to doing everything right, but only because I'd never been faced with a true challenge like reading manuscripts and evaluating their commercial and/or literary merits.

I'm thinking of Jane because today I was forwarded this story (you may need to register, but it's free!) about her husband William O. Petersen's family home. Black Point is a stately Queen Anne "country home" that sits on Lake Geneva in Wisconsin on enough acres it could easily be torn down and converted into tens of millions of dollars' worth of still substantial residences. Instead, it was Bill's dream—and therefore Jane's mission—to see to it that the home be assigned to the state and turned into a house museum.

My buddy Sandra, me, her then-partner Paul's friend Leonard and Paul during our weekend at Black Point. "WE HATED EACH OTHER" I wrote on the back, and we did. Wish we'd focused on our good fortune and gotten on with it instead of getting on each other's nerves.

Giving away $10 million dollars has never been so hard. 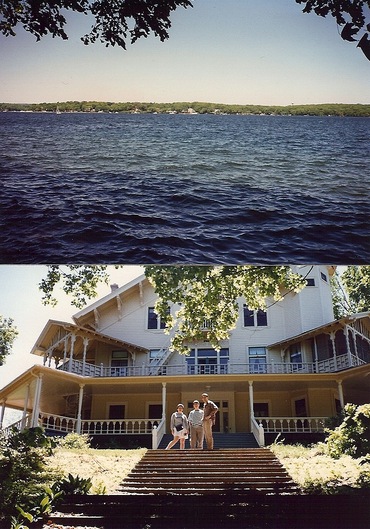 Lake Geneva as seen from Black Point and the landing (decorated with Allisa, Paul and Leonard during our trip there) that is now the main point of entry for tourists.

Once the Petersens' neighbors found out that the home would not only be open to the public, but would solicit visitors from far and wide, they did what neighbors tend to do—overreacted. Fearing that their retreats would be surrendered to riff-raff, a number of the neighbors engaged in a decade-long, costly legal battle to put the kibosh on the deal. Some of them also set about attacking the Petersens personally.

I had moved to New York when Jane and Bill were in the thick of their Black Point battles, which drained so much money and energy and, I suspect, forever colored their outlook on who their true friends were, and could be. A wealthy conservative had decided to give his legacy to the public, and he paid dearly for it. 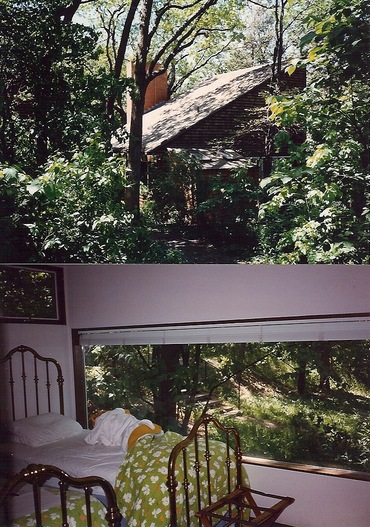 We MPD employees and friends actually stayed in "the little house," a modern guest unit in Black Point's shadow. I'll always remember the "forest aquarium" effect of the windows in my room.

I'm happy to say that Black Point is now a public museum, albeit one saddled with ridiculous restrictions put in place to mollify the ’hood. I know Bill must be happy, proud, relieved. Jane would be, too, but she passed away unexpectedly from pancreatic cancer several years ago. 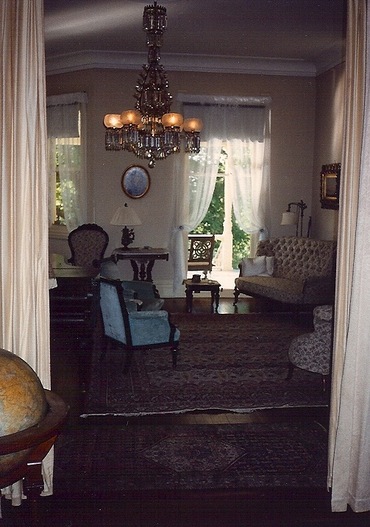 A sitting room, 1989. The globe is visible in the recent video.

I guess some of the people who despise Black Point's new status would argue that Bill's was an act of ego, meant to preserve his family name above the comfort of the people living around him. But this home—whose contents have remained largely unchanged in the past 120 years—represents such a highly personal endowment that I can't accept his gift as anything but the epitome of generosity toward and respect for his fellow man.

I've never been so happy about a conservative's victory.

A great intro to Black Point.