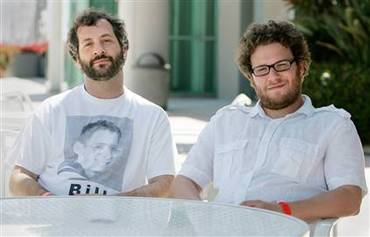 Evan & Seth: Why isn't your movie full of anti-Semitic slurs? Kids love those, too! 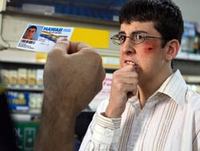 hilarious Superbad. It feels like the makers are so not homophobic that they feel they're above being called on their use of the language, which is different from the old days of the '70s and '80s and even '90s teen comedies, after the time when using words like "faggot" would have been considered too dirty, but before the all-too-brief time when it became un-PC to use those pejoratives. That Superbad tacks on a funny sequence suggesting the boys' friendship is humorously similar to that of lovers is way too subtle to make up for the preceding language, but I still can't believe the makers are homophobes. In other words, I give them the benefit of the doubt, but reluctantly—after all, if the makers aren't anti-gay, that doesn't necessarily convince me that their scripts aren't encouraging kids everywhere to rely on anti-gay language, which in turn would be making other kids' lives miserable.

Do you think Michael regrets the "fag" comment? I do. But it doesn't matter.

I read an interview with Superbad star Jonah Hill in which he explained that the film's vulgar language (he wasn't referring specifically to all the gay stuff like transposing the character "Fogel"'s name with "Fagel") was excusable because this is how kids really talk.

Oh, really? So Seth Rogen and Evan Goldberg were going for a documentary feel? Because I don't think cops really act like that, I don't think people guzzle booze from emptied-out detergent containers and I doubt gorgeous girls are swarming around fat boys and nerds, proferring blow-jays. (Okay, the last part really does happen.) I think "realism" is a cop-out in a farcical film like Superbad.

I don't overreact to homophobic slurs in films when I get the impression that the language is for realism, and the characters uttering them are being offered not as simple heroes, but as flawed human beings. But in films like Superbad, which present characters as stand-ins for any member of the audience, that kind of language feels endorsed. That's not my impression, that is how films work, and it's a shame that more filmmakers are not sensitive to the suggestive power of their own medium.

I was thinking about slurs and it seems to me that the more successful a special group is in larger society,

the less likely they are to be proactively offended, and the less likely they are to be insulted. It's almost like, "Who cares? I'm doing fine despite this. This talk is no threat to me." To illustrate, as common as "fag" and "that's so gay" have become, I would argue that misogynistic slurs are even more common—what a "pussy," what a "girl," "grow a pair," etc. Women are not paid on an equal scale with men, but they do not feel like a disenfranchised group in our society. They do not all agree on what is offensive to their gender. Gay people are more disenfranchised and only slightly less often insulted on film. There is anger over saying the wrong thing, but it's a gray area, if not as murky as with women—gay people do not always rise up as one to protest, but they have been known to. Black people are very rarely slurred on film and I would argue that people of color are clearly the most marginalized of the three "minority" groups.

Can you imagine a frat-humor film with gratuitious uses of the word "pussy?" Yes!

Can you imagine a frat-humor film with gratuitous uses of the word "fag?" Yes, though it's controversial.

Can you imagine a frat-humor film with gratuitous uses of the N-word? No fuckin' way. (I didn't even type it.) Barebacking and barefronting with Ryan.

Being gay or declaring one's self pro-gay are not in and of themselves enough to warrant a free pass on gay issues. Evolved hottie Ryan Reynolds, for example, tells The Advocate (August 28, 2007) that his homophobic film Waiting was out of his hands:

"Yeah. And the character who is cracking the fag jokes all the time inadvertently ended up being celebrated more in the movie than not. I can't really control that. I don't choose roles based on having some sort of social responsibility."

That's fucked up. That is a fucked up thing to say, regardless of whether the guy is homophobic or not (and 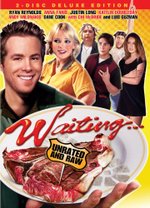 I presume he isn't, though later in the same Advocate Q&A he provocatively opines that homosexuality might just be a "First World luxury"—as if people are too hungry to be gay in other countries, where they're sometimes executed or imprisoned for life). He doesn't have to choose roles only as social commentary, but he's responsible for their content, for the message they send. (No? Then act in a KKK propaganda film for the right price. No? I thought not.)

There should not be anything superannoying about getting supermad at superoffensive language in film. It's not about crucifying the offenders or throwing the pro-gay baby out with the anti-gay bathwater. It's just about calling people on cashing in on language that puts hateful words into the mouths of yet another generation of non-gay kids, words they will not hesitate to use around their gay peers.