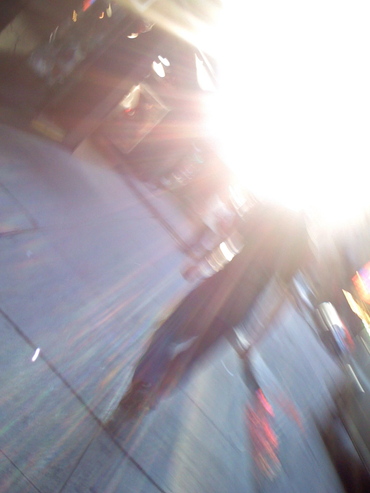 I’ve thought about this post too much so I know it won’t be adequate.

I have always been a nostalgia freak. As a kid, I saved celebrity obituaries, read Lamparski’s What Ever Became Of...? books (which were post-celebrity pre-obituaries), stockpiled mementos, obsessed over family photos, diaried every day (for 15 or 20 years)—I was sentimental-mental.

As an adult, my mania has ebbed only mildly. My collecting bug has been semi-dormant since Y2K, though I still collect memories.

Several years ago, my affliction went technological—I used search engines to snoop out where old friends’ lives had wound up. It was unsatisfying—I’m at just the right age to have still had a lot of my peers be totally unfindable. I discovered next to nothing.

In the past, all of the good stuff's already happened.

Recently, it suddenly occurred to me that a hell of a long time had passed since the last time I looked for anyone, and it also occurred to me that the rise of social-networking sites might actually trump the already astonishing usefulness of Google.

I had some people in mind when I began, people I’d spent a lot of time with in high school. The people I wonder about are often the ones I shared intense times with, even if some of the actual experiences themselves are a bit of a blur. Like anyone, I’m most curious about people with whom I had sex or with whom I still wish I’d had sex.

And, less glibly, the ones with whom I believed I’d fallen in love.

Part of my fascination with finding people from my past is the weird idea that even when someone is completely out of your life, time passes for them, they experience other things and other people, they age, they get jobs, they have sex, get married, get divorced, have kids. It’s bizarre to remember that life goes on, with or without you.

One person I’d really hoped to find, if only to check up on, was Jeff. I didn’t become superclose to him until the very end of my senior year—I’d always been kind of a well-liked geek (and, only when I was younger, the class “brain”), very straight-and-narrow, but I shed that image and a few dozen pounds in my senior year of high school. (Check out my pre-senior year senior portrait: Fat, mustachioed, '40s hair crunchily center-parted and holding an I-shit-you-not Marilyn Monroe book, alongside me by year's end.) I’d begun to shed my old pals and was aggressively trying to fit in with a group of artsy kids with huge IQs and senses of humor, an anti-authoritarian solidarity and more angst than The Breakfast Club—forget about breakfast, we had enough angst to bring in lunch and dinner, too. From a crazy day at Rachelle's; I shot Laura as a Marilyn Monroe character and Jeff as, well, a Jeff character.

Jeff was in this crowd, as well as sharing a class or two with me. He was unlike anyone I’d ever known or ever dreamed I’d come to know. Jeff had an impish quality that could nimbly sharpen itself into an understanding of how to annoy another person to the point of tears, fisticuffs or other anti-social behavior. Moody, yes; but when he was happy he was sensitive, extremely cerebral, wickedly funny, adventurous, creative. I just loved him, and probably loved him, too. We spent the summer after I graduated joined at the hip, comparing notes on what we thought of everyone else, sleeping over at each other’s houses, going on midnight strawberry poundcake runs to Denny’s (I paid) and trying to figure out if we were friends or something more. 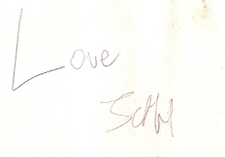 I don’t think Jeff was bisexual. Or at least he wasn’t very bisexual. But he tried for me and our friendship drifted into romance after a lot of soul-searching. Then it drifted back to friendship with no broken hearts. Then I moved away to go to college and even our friendship drifted away, after a year or so of correspondence. One of his letters to me was written on the back of a Xerox of a book jacket: a bio of notorious satyr Errol Flynn. He’d made me a candle to take to school and I’ve had it ever since. I can’t explain why, but it looks just like him somehow. We used to call him Cal for some reason, three letters from the word "candle." The other three are "end." 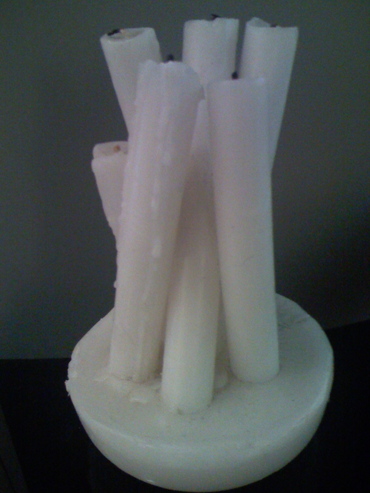 So here I was, in 2007, looking for him on a whim, wondering if I’d even want to find him. I’d heard he’d joined some kind of circus and had a daughter, both of which shocked me and made perfect sense at once.

Jeff’s name is unbelievably common (as were many names in my hometown), so instead of looking for him specifically, I used MySpace and searched for graduates of Flushing High School, c/o 1987. I couldn’t believe it when several popped up. The first one blew my mind—it was a bizarre picture I couldn’t associate with anyone I’d been to school with. I clicked and it took a minute, but it dawned on me that this strange person, calling himself “Dr. Fuckoffski” and located at the MySpace URL “urineforatreat” was ...Jeff. 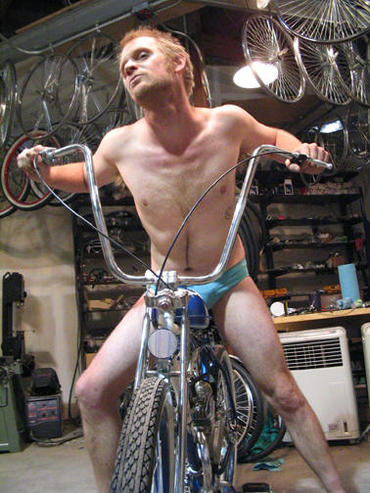 Dr. Fuckoffski, still recognizable as Jeff, on a bike.

Jeff’s pictures were bizarre, but they were definitely still Jeff. One, entitled “VROOM VROOM,” shows him on a bike dressed in baby-blue briefs and looking very much like Sting from Dune—an altogether possible inspiration for the pose as Jeff was a fantasy buff. There were pictures of him with a circus theme (that rumor had been true), and even one of him carrying a baby on his back whle wearing a fanciful horned hat (that rumor had been true as well).

Then I read his comments and the heart that had managed to remain unbroken 20 years ago took a hit—the second comment down, from February 18, 2007, read, “SO sorry to hear. Goodbye.” The third was, “goodbye my dear brother i never had. you were the best”. And finally, “miss you allready goat boy- at least you went out having fun...xoxo a”.

As odd as it is to understand that life goes on when you’re not looking, it’s incomprehensible that death goes on, too. It was hard for me to actually process the information, but Jeff was clearly dead.

A "psychograph" someone made of Jeff + an allegory for his life's journey. 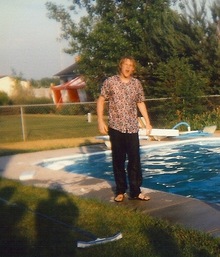 I found out a lot about Jeff with a few more clicks. He’d apparently died spectacularly, on a souped-up bicycle or moped, in the city where he’d lived for more than 10 years. Always an edgy outsider even in high school, he appeared to have become more and more a part of fringe culture, and had been involved with performance troupes, even learning to breathe fire. The idea of Jeff spitting fire is almost too priceless not to be made up. He was so provocative he pushed my mild-mannered father to the brink of violence at my high-school graduation party (pictured) by pretending he was about to toss my aunt and grandmother into our pool. “Take one more step and I’ll drop ya,” my dad had growled. 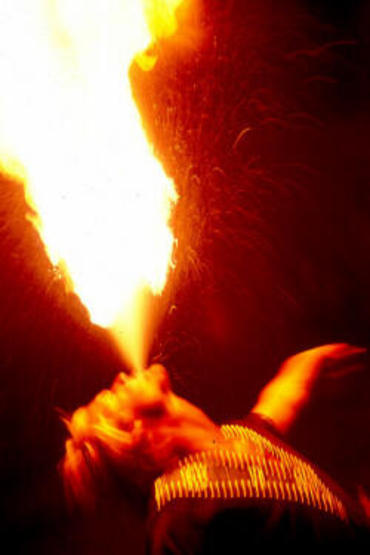 Playing with fire was Jeff's living, and his life.

Jeff was a clown, a hippie, a Burning Man crew member, a convert to Islam (interestingly, he'd once sent me a Cat Stevens Foreigner postcard), a father, probably an anarchist. His death clearly touched and ticked off a lot of people I can’t imagine hanging out with, and I’m sad for them in the same way I’m sad for me. An article discussing a February 2007 tribute to Jeff—he died in February of 2006—summed up his personality succinctly in a line meant to describe the life of a clown: “Who really wants to be normal?”

I do, probably too much; Jeff never did, probably too much. And he never was normal—less so as he got older, it seems, potentially helped along by mind-altering substances that must have been especially powerful considering he was born with an altered mind. 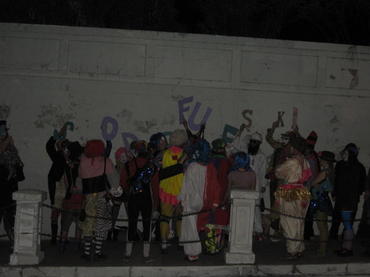 It’s almost like Jeff was trying to get so far away from normal he had no place left to go but wherever it is he went.

One of Jeff’s last letters to me in college reads:

“I doubt myself too much and I’m afraid to fail. I don’t like to do things if they don’t work right at the start. I’ve abandoned many a thing because I would look bad at it in the beginning. That’s silly.” I’ve thought about this post too much so I know it won’t be adequate; maybe it will be more than adequate, because Jeff didn’t value perfection. He wasn’t a perfect person or a perfect friend—he sometimes enjoyed being a perfect jerk—but our brief, intense friendship happened to me at the perfect time in my life to change me deeply, like fire, an irrevocable cleansing.

As much as Jeff also changed, deeply, over the years, I’ll never forget him and I’ll never regret knowing him; I only regret not knowing him longer and better. But also like fire, he burned brightly, sometimes did damage, was essential, was elusive, scared me, mostly was comforting and warm and, ultimately, was extinguished at an unpredictable hour. 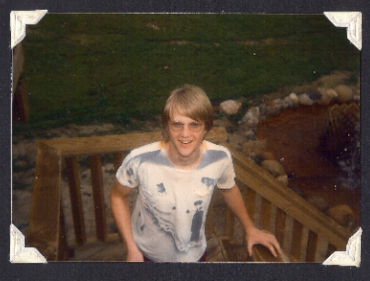