I jumped at the opportunity to be on the host committee for NewFest/Outfest’s East Coast premiere of the restored Parting Glances, which was held October 29 at the Walter Reade Theater at the Film Society of Lincoln Center. All I had to do was commit to buying some tickets and to publicizing the film—and I’d already been doing the latter with incredible regularity over the past 20 years since I first saw it.

The Legacy Project is committed to restoring and preserving queer cinema, a first-of-its-kind undertaking and something that I’m sure most people would not think was necessary for a film released just three years before The Simpsons hit TV. But the fact is that all good things—including any kind of film stock—must come to an end.

If you let them.

I’ve been in love with Parting Glances from the day I saw it, eyes wide open, and I’ve been fascinated by the fragility of movies and the volatility of celluloid for about a dozen years—I was first drawn to the subject of the temporal nature of film and video after reading books like Lost Films: Important Movies That Disappeared (Citadel Press, 1996) by Frank Thompson and made it a theme of my novel Blind Items: A (Love) Story. It makes me feel ancient that my interest in Parting Glances and my interest in film preservation have legitimately intersected.

B-roll of the grade-A cast.

For no good reason, I was incredibly anxious about the actual event. I wasn’t expected to do anything but show up, and yet I felt this need for everything to go well, to say hello to the actors (most of whom, with the major exception of Steve Buscemi) were going to attend, to get pictures. Pictures, pictures, must get pictures! Just like the movie’s own tenuous existence prior to restoration, it’s all about preserving the proof that something happened. 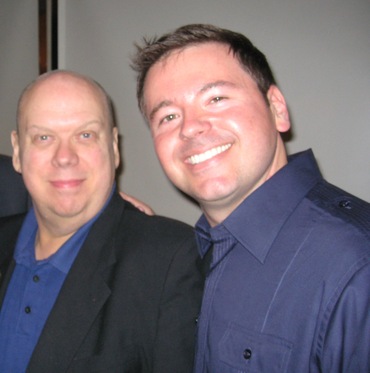 I never attend a reception with less than two stars...

We sprang for VIP tickets, so I went to the pre-reception with my partner José and our friends Paul and Lav (pictured), and we met up with blog-buddy Kenneth from KennethInThe212. Kenneth and I had sort of sponsored the attendance of cast member Richard Wall—“Douglas” from the film, the best/worst

party guest of all time. In real life, Richard (our meeting pictured) turned out to be all the best and none of the worst of Douglas, funny and full of factoids 'n' fictionoids about the making of the movie. His guest was a former dancer for, among others, John Davidson. You just know they have stories to tell between the two of them.

But I felt strangely anti-social because all all my focus was on my mission, one I realized I shared with Kenneth. The first sighting was Kathy Kinney, the film's struggling artist and hostess-with-the-mostest(-drugs) “Joan.” She of course has since become famous as The Drew Carey Show's screaming “Mimi Bobeck,” a character that could not be further removed from ultra-lowkey, almost ethereal “Joan” and Kathy herself. She was talking with Yolande Bavan, who was so hilarious as the film's obvlious/evolved “Betty,” but Kenneth and I sidled up to them for our first photo-op of the evening. They humored us and we felt emboldened. 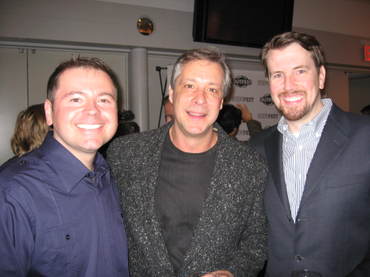 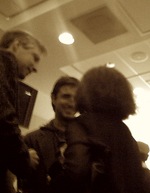 Next, we drifted over to Richard Ganoung (“Michael”) as he chatted with Craig Chester (pictured, but why didn’t I feel the uncontrollable need to pose with Chester? He’s also a true gay-cinema idol and the star of the amazing Swoon, which probably needs restoring soon, too!) and were able to have our pictures taken with him quite easily. In our limited exchange, Ganoung came off as incredibly nice, much less peevish than "Michael" can be in the movie! 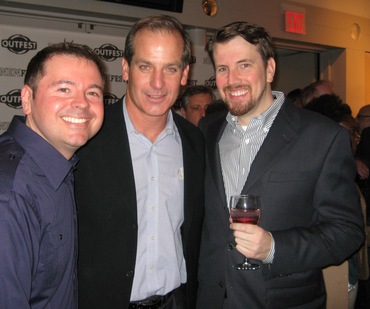 Kenneth and I with our John.

Finally, we hovered by still-sexy John Bolger (“Robert”) as he did a video interview then were able to collar him for some snaps. He gave me a look that had the effect of your male-lead dance partner’s hand on the small of your back, though I realized this was not a look he was “giving” (let alone to me) so much as one that is his default look. Flush with success and

blindered to any feeling that our machinations were attracting attention, we were able to hop into some group shots with the cast. As we squeezed into the frame with “Michael” and “Robert,” I mumbled to John that we'd both always wanted to be a part of the perfect couple—which made him laugh. 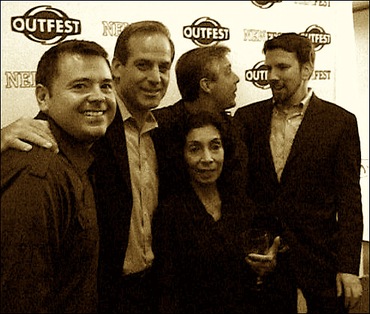 Then I exhaled and we sat down for the screening.

My pictures turned out so incredibly awful they made me want to stick my finger down my throat, but the actual film turned out looking pretty crisp. It was never a visually stunning film, being an indie drama that’s more say than do, but the work done on it had returned Parting Glances to the state it was in at its February '86 opening. Seeing it in a theater made me love it all the more, helping me to appreciate an absolutely flawless script dripping with wit and wisdom.

Sherwood's rage over a botched poster! After, there was a talk with cast members, during which lots of juicy tidbits were learned. Producer Yorav Mandel admitted to having slept with people in order to get money to finish the film, casting director (and the film’s “ghost”) Dan Haughey revealed that many actors had passed on the too-gay roles, and we found out the film’s late director Bill Sherwood (he died of AIDS in 1990) had later written a script for a film to have starred Kinney called Only Child. Can you imagine?

Interestingly, Bolger discussed the disapproval that emanated in the halls of his then-job on The Guiding Light when “PG” (as they call it) opened but asserted the "quite wonderful" script and "employment" were his only considerations in accepting Sherwood's offer to star. Kinney actually benefited from her participation—a year later she went out for a $400 job on Dr. Ruth's show as a woman who wanted to marry a gay man (who knew Dr. Ruth was fixed???) and was hired on the spot by a gay booker who discreetly recognized her from the film. Imagine being in the closet at work when you were working for the world’s most celebrated sex therapist...

Ganoung had some striking remembrances of working with Steve “Nick” Buscemi (who was filming in China but had attended the L.A. premiere this summer and sent his family to this one), the most interesting of which was the fact that Adam “Peter” Nathan had been cheering Ronald Reagan’s inauguration while the famous stairwell scene was being shot. That scene was originally to have been between “Michael” and “Nick,” but it wasn’t working. Ganoung went home and the scene was shot using some of the dialogue that Nathan had just been saying for real—but no one seems to know where the young Republican is these days. Thoughts? I later e-mailed Haughey about the possibility that any outtakes may exist, especially anything substantial like a stairwell scene with “Michael” and “Nick,” and he said to his knowledge nothing exists, though Mandel had raised the possibility that a box may have gone to Sherwood’s parents in 1990.

Everyone spoke at length about Sherwood’s uncompromising nature to the point where it seemed like he was up on the stage himself. I’d had no idea he and Kinney were so tight (she was called his “muse” at one point) and that they’d been the world’s worst operators at WCBS while he wrote the script that would become Parting Glances.

Hysterical story of why "the world was ours" for Kinney & Sherwood!

Though Parting Glances is not exactly an AIDS film despite being the first feature to deal with the topic, it was nonetheless surprising to learn that as Sherwood was writing the script in 1983 he had zero experience with the disease and had to send his producer to Brookyn to meet with a doctor who’d actually seen AIDS patients. Despite that, Sherwood was convinced—and told Mandel this—that “everybody living in New York is going to die.” They didn’t, but Sherwood did, and Haughey confirmed that Sherwood had assumed he already had the disease but did not know for sure until much later. Mandel choked up remembering this story, and I choked up hearing him choke up.

Another deep moment was when Ganoung reminisced about filming the scene that makes me cry every time I see it—where “Michael” confesses to “Nick” that he is the one love of his life. Ganoung seemed to well up with emotion exactly as he had in the celebrated scene, which was the last take after a long night and directly following an acid-tongued challenge from Sherwood. Ganoung (recently profiled here) is really deserving of more attention, not only for his complicated perfomance, but for telling us it was “never a question” that he would do the potentially risky film and would do it as an openly gay actor. How many others have been so open from the start of their film careers? Not many. And not many of them, if any, can point to having been a part of a film as fine as Parting Glances.

I’m forgetting too much and remembering too much; luckily, I also captured some good video (or rather, some good audio that is accompanied by distant video). The night ended but the cause goes on—I hear the next Outfest Legacy Project beneficiary is the 1977 documentary Word Is Out. If it’s as important to you as Parting Glances is to me, or even if you’d just like the opportunity to find out, consider supporting Outfest today.