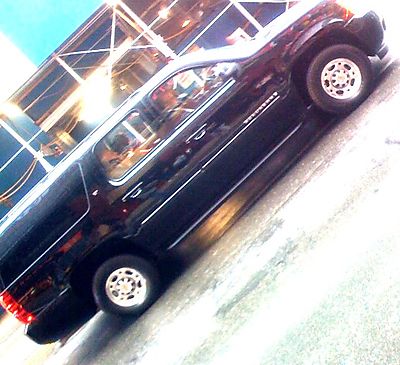 He drives me crazy.

I just saw John McCain and his second (so far) wife in person! I went home for lunch, where I watched excerpts from The View—on which Barbara, Joy and Whoopi duked it out with McCain on abortion rights and his lying ads—and was on my way back to work when I was confronted with a long motorcade going west on 42nd Street. Immediately, I deduced this was likely to be John McCain since he is in NYC—I'm good at instinctive star-sighting stuff like this (and he is the third-biggest celebrity in the world now, after Sarah Palin and Barack Obama)

I turned my head and his SUV stopped directly parallel to me for quite a long time, 45 seconds or more. People were kind of standing around, but I could see into the window clearly—white-haired McCain speaking animatedly on a cellphone (he knows how to use one of those newfangled contraptions, at least), using his left hand to make a point. His second wife (so far) was dressed in flaming orange, also lost in a cellphone convo.


After snapping two iPhotos, I backtracked a few feet to see if I would get his attention. I did and as he started to wave I gave an emphatic thumbs-down at him and didn't stop. It was a transformative moment for me personally, even if it does zero to help the rest of the country in any way—I felt so privileged that I had this lucky opportunity to express to him how I felt.


The shocking part is his reaction: He leaned around, more square to the window, and defiantly waved at me quite energetically, as if to try to override my silent gesture with one of his own. It was a microcosm of his whole campaign: "You're a liar!" "No, I'm not." "You're more of the same!" "No, I'm not."
This all felt monumental to me. I couldn't be happier. For the moment.