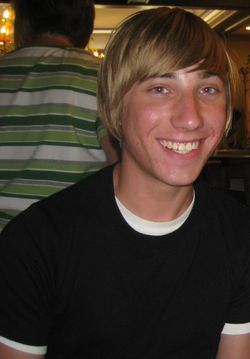 Today, I received word that a young man I'd met only once had suddenly died, killed in a car crash in my hometown of Flushing, Michigan, at an intersection I'm very familiar with. His name was Zach Morley, and he was the boyfriend of my second cousin—one of the daughters of my cousin who used to babysit me, and who I looked up to as being cooler than Pinky Tuscadero at the time. I hope I'm not invading her privacy in writing about his death—it's just that it absolutely breaks my heart.

I'd been introduced to Zach, who was just 18, at my grandmother's 90th birthday party in Frankenmuth. He and Alyssa were an adorable couple. I had not seen her since she was small enough for me to send kiddie Christmas gifts, but I was pleasantly surprised to find that she and her sister had grown into offbeat, smart, hilarious young women who struck me as being almost to the left of me...which is hard to do, harder still in my own family. Zach seemed to be a kindred spirit to her, and I immediately related to him. They'd even gone to see the True Colors Tour together, and he was studying poly sci, looking forward to voting in his first election (for Barack Obama, as it turns out).
UPDATE: More details about Zach—he was a gifted musician, passionately against our country's illegal war in Iraq and was killed while going to the store for milk.


According to the news in Michigan, he was rear-ended while stopped at an intersection. The light was red and as soon as it snapped green, a woman behind him plowed into his vehicle, sending it 75 yards and killing him instantly. The accident is being investigated by the Genesee County Fatal Alcohol Crash Team. UPDATE: A new report is stating "alcohol is not believed to have been a factor."


I don't know what is more frightening, the idea of dying slowly or the idea of being snuffed out in a moment with no notice. But his story has impressed me. It reminds me of when the longtime girlfriend of my other idolized cousin (a boy) on the other side of my family died in 1984. She was a gorgeous girl with sparkling eyes and was a great sport, the perfect match for Wally to the extent that perfect matches were possible in your teen years.
Tragically, she died in her sleep one night—and no one ever figured out why. There was talk about her having just started a diet, of just having eaten tuna from a can and some other random "clues." But her death was listed as attributable to natural causes—at 19. I got the news from my mom, and when she told me, I had to ask, "You mean her grandmother, right?" because her grandmother had been sick. But it was not her grandmother, it was Pam, and I felt so awful that I barely knew what to say to my poor cousin. Her funeral was deeply moving. More moving still because hers was just one of several deaths in our family that year, and the person most visibly upset by her passing, his sister-in-law, later died in her thirties of cancer.
I looked her up on Pipl and discovered that her mother just passed away a few months ago.


It's beyond selfish to think that death happens to teach you a lesson, but it's worse not to try to take something from it, to learn something. I've learned it before but had forgotten it—life is short and is meant to be enjoyed. It's simple information, but so easy to misplace.