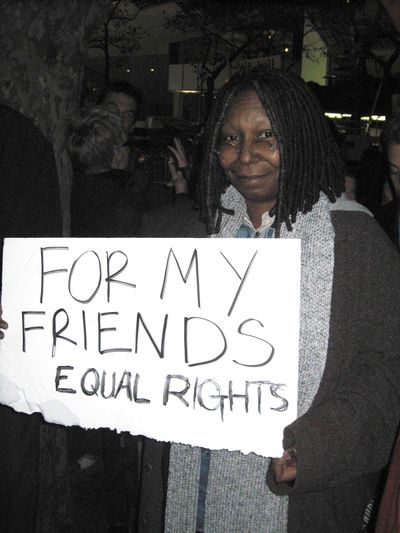 Yes! I met Whoopi Goldberg and she happily posed with her sign. 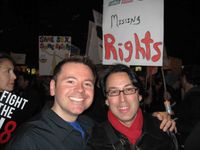 My partner José, my pal Jason and I just got back from the well-organized and upbeat march in Columbus Circle to protest California's passage of Proposition 8—there were thousands of queers, but not much anger because I think most of us are confident that we are on the right side of history. It seems likely California's Supreme Court will not ratify Prop 8 and young people support gay-marriage rights in overwhelming numbers. (It's a shame New York is hemming and hawing on the issue thanks to fake Democrats.)


I got to meet some great people (including a nice man from TheMarryingKind, which advocates boycotting all weddings until gay marriage is legal everywhere...which is great until your sister gets married) and was recognized as Matt from BoyCulture by a really adorable young couple—I felt like a movie star in-between projects! (Thanks for saying hi, guys.) 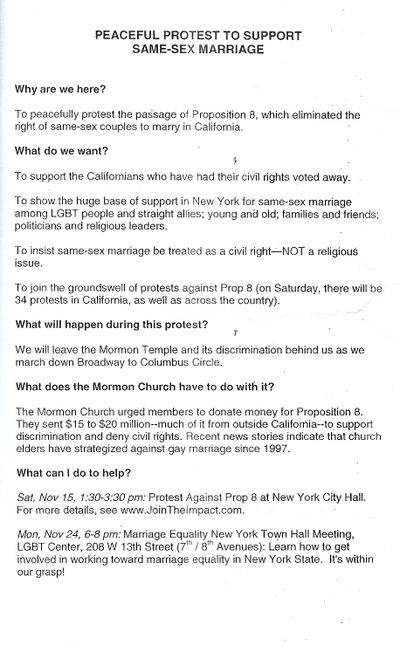 Here is my video of the event (with a lot of Whoopi Goldberg and some Judy Gold action):


Whoopi was quoting Benjamin Franklin and also talking about partners being unable to visit each other in sickness. Later, on video, she said, "Now, I'm not a big fan of marriage. But people who wanna be married should be able to get married." Asked why she's no fan of marriage, she smiled her Cheshire Cat smile and said, "I just don't do it well."


As soon as I arrived, I spotted Kate Clinton, who showed off her handiwork with a smile (how is she 61 years old???): 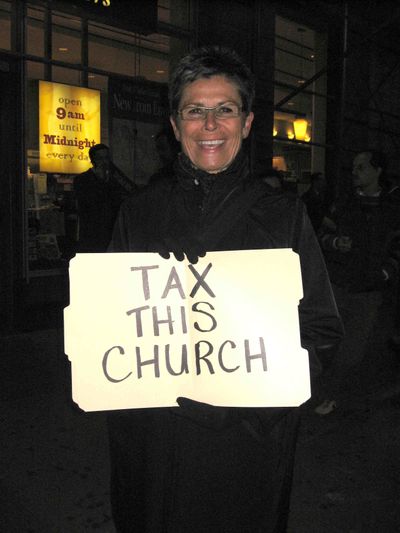 The protest was focused on the G-d damn Mormons, who largely funded Yes On 8.


I also finally got to meet Joe Jervis of JoeMyGod, who graciously linked me ages ago when I was a newbie (I just celebrated my third year as a blogger. Or rather, I forgot my own anniversary on November 6!) but whom I'd never met until tonight. He's as nice as you'd expect and wouldn't be caught dead smoking on film—very Obama of him: 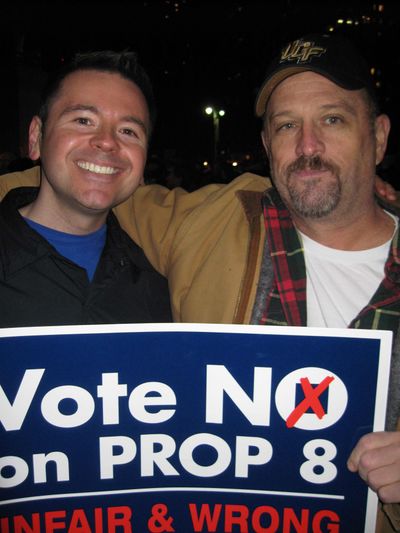 
I also snapped Shortbus superstar PJ DeBoy, who made sure to introduce himself after I prevailed upon him for a picture—it would have been rude to give him my number in front of my partner at a gay-marriage rally, right? Right?: 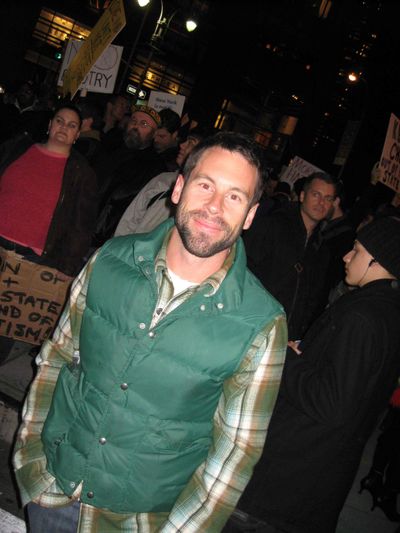 The hot butch look that is all over Milk is officially back "in."


And how fun to see living-legend playwright Tony Kushner: 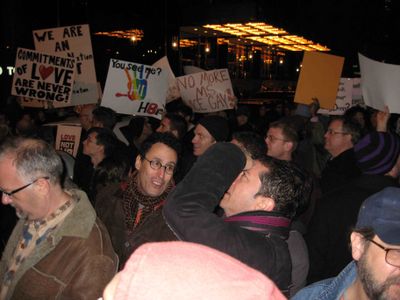 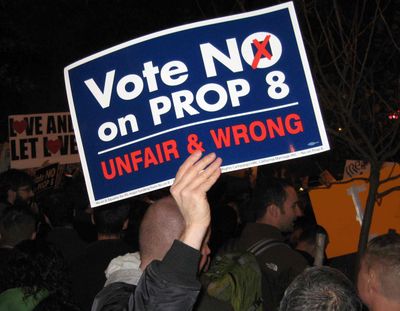 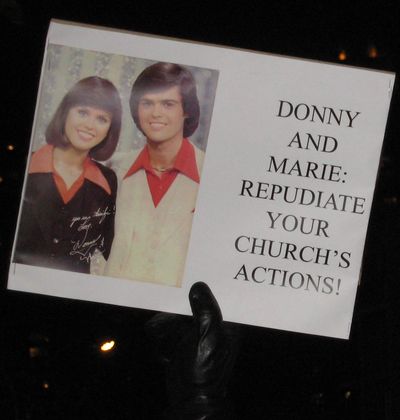 Ask Marie & I bet she'll be Dancing Around The Subject With The Stars. 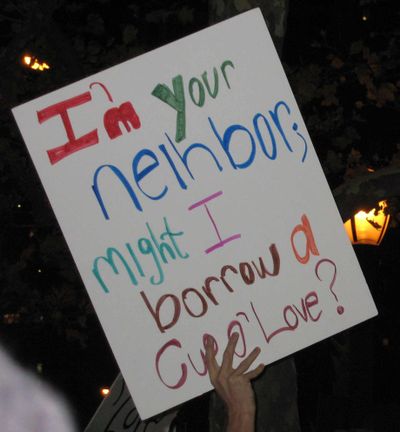 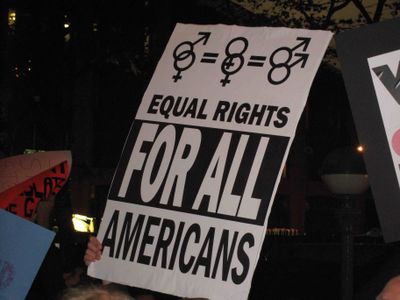 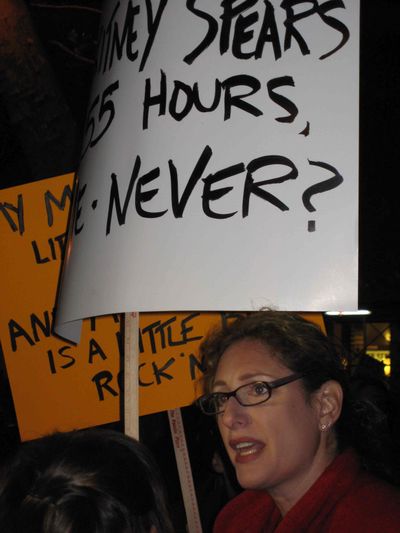 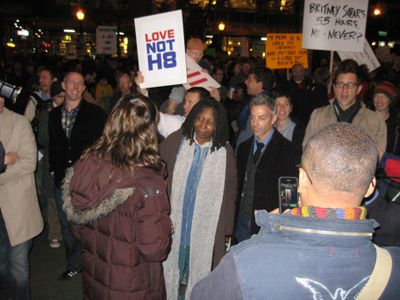 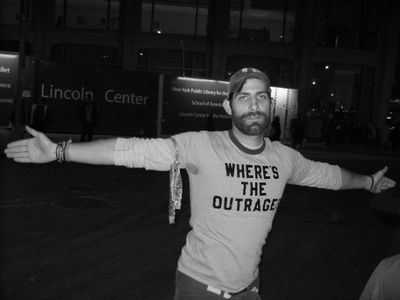 Okay, to an extent I was using the march as an excuse to take guys' pix. I particularly liked, "Who Would Jesus Hate?" 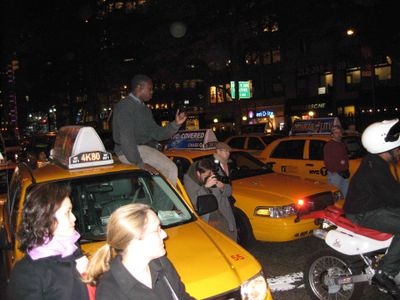 Sucks to be in traffic. 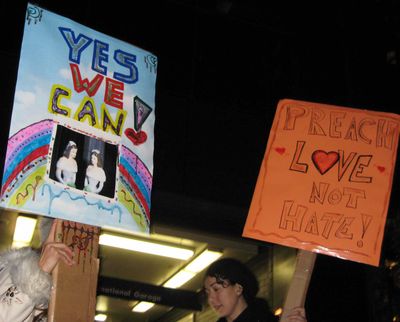 Positivity was also in vogue. 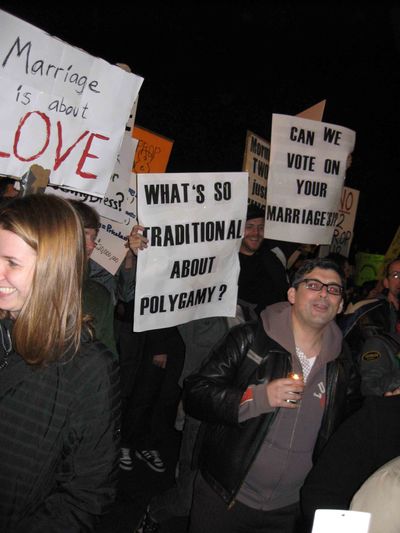 Delicious potshots at the Mormons. 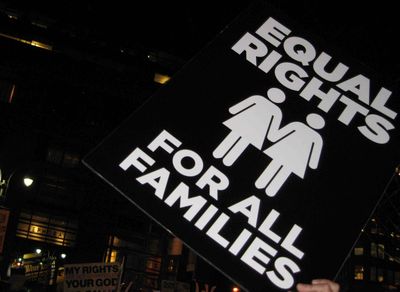 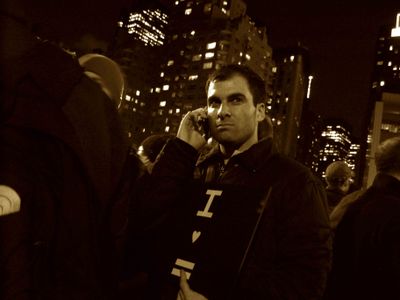 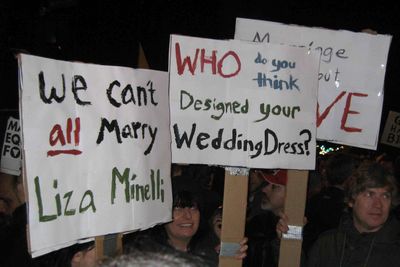 It was almost like there was a cash prize for best signs!


If you've read this far and you're in NYC, come on out on Saturday, November 15, from 1:30 to 3:30 p.m. at New York City Hall. Check JoinTheImpact.com for more details.
UPDATE: I almost forgot a hilarious aside—two cops holding up a flimsy barricade at Columbus Circle were talking amongst themselves, with one saying, "...I guess as long as they don't go into the streets?" They seemed clueless about what would be a big issue. Then one said, "Thing is, I really gotta pee," to which his comrade said, "Yeah, me, too." I'm pretty sure a few ears pricked up over that exchange.