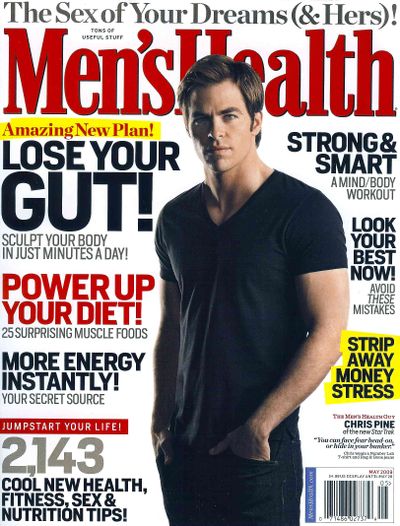 Chris Pine was supposed to be the next big thing when he was the hottie in The Princess Diaries. Didn't happen. But he appears to be on the verge of mainstream Hollywood success playing Captain Kirk in the latest Star Trek movie. I think he's kind of cute, but if you're gonna be shot by Art Streiber for the cover of Men's Health (May 2009), the inside layout should not be suits, but rather your birthday suit: 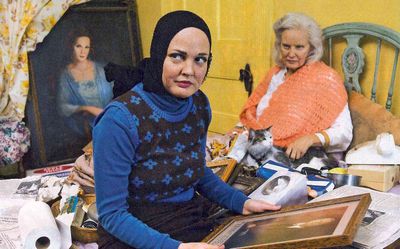 "I went into that meeting...needing to prove I wasn't just a Valley Girl actress who talks out of the side of her mouth."—Drew Barrymore, TV Guide (April 13—19, 2009), on meeting the director and cowriter of HBO's Grey Gardens

The Teabagging Events seem to have been a bunch of lunatics carping about paying too many taxes (despite most of them making under $250,000, and therefore getting a big TAX BREAK from President Obama). But how in the hell can the governor of Texas get away with threatening secession from the United States? The right-wingers are turning into absolute traitors over Obama's decisive win and continuing high popularity. It's insane...I honestly never dreamed that anyone would be more unfairly polarizing than Hillary Clinton, but Obama beat her in that regard, too: 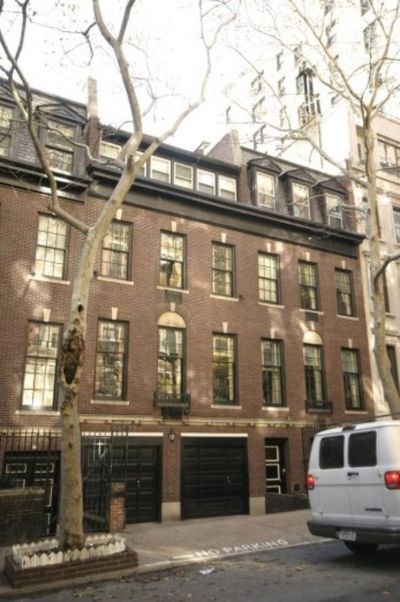 Madonna's purchase of a townhouse on the Upper East Side (it's tempting to editorialize on how she started Downtown and has ended up as an Upper East Side lady, but I can resist) is generating a lot of press in a town and a country and a world where home sales are flaccid. She reportedly paid $40 million for the 26-room, double brownstone, but word on the street is that she might have wound up paying closer to $32-$33 million for a property that was originally listed at $45 million.
At any rate, it's great having Madonna back in NYC permanently.
After the jump, extensive images from inside...

Picking On The Bullies Comments (0)

CNN kicks sand in the face of anti-gay bullies who are causing gay kids to question their identities, do poorly in school and—in extreme cases that are becoming more and more common—take their own lives. Via Joe.My.God. 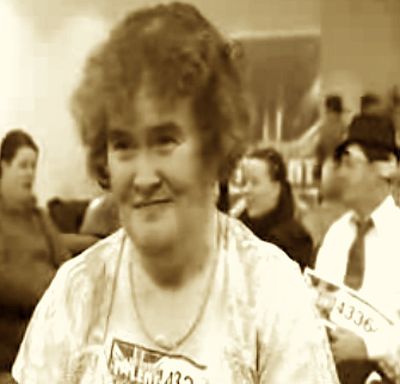 I saw her two days ago and didn't post this, and by now everyone's seen and heard her. But in case you haven't, I just had to post—I found this clip annoyingly moving. "Annoyingly" due to the cynical commercialism behind it ("This is gold, boys, we're gonna make a mint off of this spinster! Wait'll they see it on the Internets!"). But even knowing how manipulative the clip is and how manipulative all reality shows are, and even knowing this "never-been-kissed" devout Catholic cat lady could for all I know turn out to be some kind of anti-gay crackpot just as easily as she could turn out to be charming and sweet to the core, Susan Boyle's voice and story deserve to be heard.

Alan Ritchson visits Head Case and performs a striptease that leaves little to the imagination.

Also via Sticky, check out GuysWithiPhones (it's kind of like my iLOVESNEWYORK, except they know their pictures are being snapped): 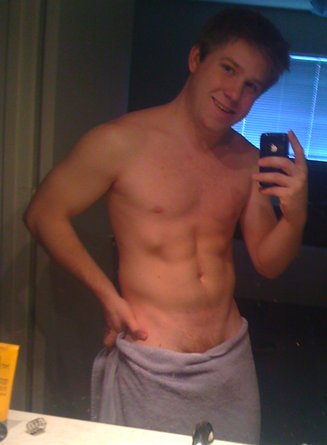 Everyone who reads my blog knows I'm on Madonna's side on most issues and firmly in her camp regarding her desire to adopt Mercy, but releasing this hideous photo of herself looking like a cigar-store Indian version of Faye Dunaway, bathed in light and white and blondeness, is not going to help anyone who isn't. If this isn't about PR (and it's not), then don't retouch a photograph of yourself to within an inch of its life before handing it out. Just really strikes me as unnecessary.
For high comedy, the editors of Hello! UK say, "The softness in her face as she cradles the child she desperately hopes will complete her family is not a side of Madonna we have often seen." The softness??? It's like, "Hello, Hello!—look again."