Night At The Museum: Singin' Through The Pain Comments (3) 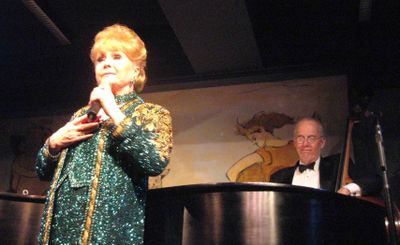 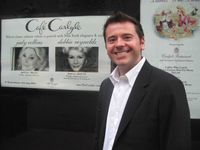 Manhattan engagement in over 25 years in spite of a busy schedule of nightclub appearances—it was a no-brainer. It's not as if we have a Debbie poster in our living room and know everything there is to know about her, but she's one of the last of the legends from Hollywood's Golden Era (if she'd never done anything else but Singin' in the Rain, that would have been enough) and one of the last of the vaudeville-type stage stars who's still in good working condition. Plus she was a highlight of Will & Grace—what would have stopped us? 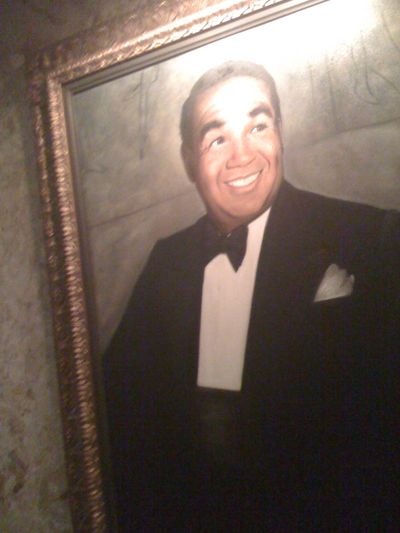 The late Bobby Short is memorialized in the Carlyle's lobby.

We'd never been to the Carlyle, but figured springing for the VIP seats would not break us if we were already committing to a menu 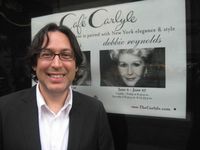 with $25 apps. We arrived at 6:30 and were promptly seated directly next to the teeny-tiny stage. The room is only a 70-seater, so it was quite cozy. This is where Woody Allen still religiously plays, and it definitely has a jazzy air to it, what little air there is in this breakfast nook of a New York institution.
The captain and waiters were as austere as the room, but in a New Yawk way; this is not a place for European royalty, but for guys and dolls who've made their fortunes working hard and then wheeling and dealing. They are facelifted and be-suited, jeweled and jaded, but they know what's what and were not about to blush in spite of Debbie's reputation as a somewhat bawdy old dame. 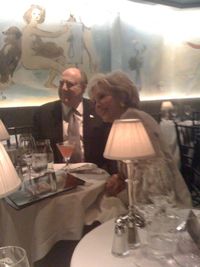 
One gentleman who was staring us down finally asked, "I have a reason to be here, but why are you here?" It was slightly gruff but mostly playful—he was just incredulous that people in their forties would care about an icon from his youth. It turned out he and his wife—who were very nice—had been neighbors of Debbie's many years ago, back before they were forced to give up eating bread and dessert, a sacrifice that explained the not-impolite edge to his demeanor and her not-unnecessary role as taskmistress of all things digestible.


A lady behind us, gussied up quite fetchingly and resembling a faded film star herself, haggled with the waiter, "There are no fava beans in this salad...?" "There are, Ma'am, right— "Well, just show me one, then." "I'll bring you more." 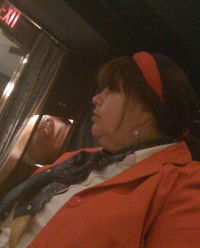 Directly next to us were a man and woman who José decided must not be that rich. She was dressed like a little girl from the turn of the century in a red, white and blue ensemble made up of a white pleated skirt and a red hairband. She spoke like a female Brando and was built roughly like him, too, but that didn't stop her from observing (based on the tablecard alone) that, "Debbie looks older than she used to." Debbie Reynolds is 77 years old...what's your excuse, Brunhilda?


She also mentioned twice that she hoped Debbie would not be dressed provocatively. "I like people to cover up," she stated. "That's just not me." She's seeing a 77-year-old and worried that she'll be half-naked?


Anyway, José may be good at instinctively picking out the richest foods and priciest presents for himself, but he's bad at spotting true wealth—as the couple yammered on, she began speaking to him about "the Renoirs" and how she wanted them moved from the tea room. What she lacked in glamour (I think they were Orthodox Jews, hence her wig and aversion to cleavage), she apparently made up for in historical possessions.


Before the show started, I told José we should expect various things (I don't drink or it might have made a good game): an acknowledgment of us two since we were front-and-center and half the median age of the room, a Mae West impersonation, "Singin' in the Rain," "Tammy," a mention of Carrie Fisher, a mention of Eddie Fisher, some kind of Elizabeth Taylor joke and maybe a rendition of "I'm Still Here." I got them all right, and she was only on for an hour, but there is something to be said for living up to completely-expected expectations.
Debbie came on to a cheerful "Heeeere's Debbie!" looking lovely in a Nolan Milleresque green-and-gold sparkler of a gown and a blonde wig with just a hint of a styled lady-mullet in the back (maybe those rumors are true after all). Immediately, it was clear she is not—as she herself would later frankly admit—a Barbara Cook-style diva, but is instead more of an entertainer. Her once serviceable voice is a bit more reluctant, but her showmanship is unblemished.


Eagerly working against the staid quality of the room, she asked a gentleman for a bite of his (heavenly) leftover brioche pudding, announced that she had a right to say "bullshit" on stage at her age and joked of her tiny stage, "I've never played a room so small. I feel like a little donkey up here." 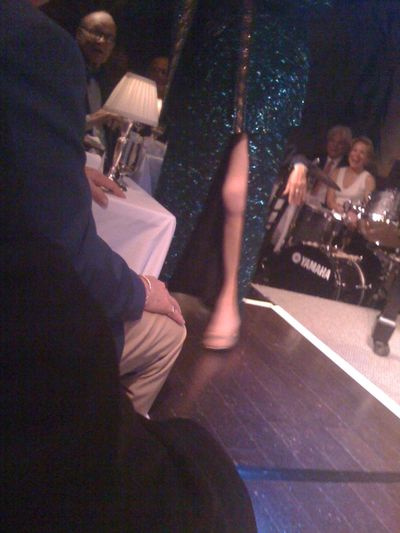 
Her first number I wasn't familiar with—"Gee, But It's Good to Be Here." But she segued into my predicted "I'm Still Here," for which she'd cleverly written all-new lyrics relating to her 61 years in the biz. Also as predicted, she acknowledged José and I early and often, exclaiming that we were so young she had to ask, "Who invited you???" and revealing her "good leg" that he and I obviously "don't give a shit" about. She actually invited us to touch her leg to confirm its sturdy condition (we did) and then howled, "Thank you!" A lot of her act dwelled on her pent-up sex drive and unlucky-in-love past (two of her husbands stole her money, Eddie Fisher stole her dignity), with cracks about her vagina being rusty and in need of her accompanist's long fingers ("Maybe just this one," she said, picking out the middle).


Racy asides (and there were plenty of them) aside, her act was dominated by breathless remembrances of her MGM and showbiz past, including good-natured digs at the woman who played Angelina to her Jennifer, Elizabeth Taylor. First she gloated that Liz is three months older than Debbie, and then she summed her up as, "She's sweet, isn't she? She's cute." Her nostalgic interludes were punctuated by songs, or sometimes fragments of songs, everything from "Singin' in the Rain" to "I Wanna Be Loved By You," "Aba Daba Honeymoon" and "You Made Me Love You," from her 1970 Broadway show Irene, for which she was nominated for the Tony in 1973.


Her most noteworthy musical elements were a long homage to her friend Judy Garland ("We used to sit and polish off a lot of...water together. A couple of boxes of wine.") including every Garland number you can think of and her finale, "Tammy." "We used to sing songs like this," she said to José and I mid-number. "No rap." 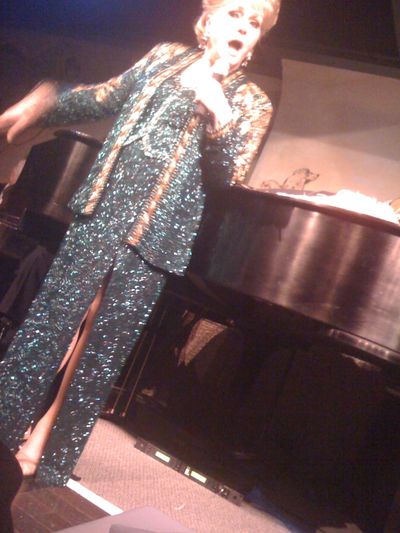 Debbie's girl-next-door quality allows her to lampoon other stars without seeming vile.
But more than the music, Debbie's act is livened up by her impressions. We were treated to Mae West ("She would arrive with this gorgeous muscle-men...you guys would like that," again to José 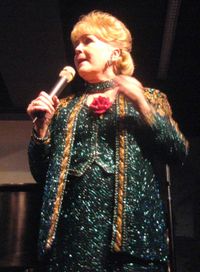 and me), Zsa Zsa Gabor (which isn't as fun now that Zsa is 90 and an invalid, but it allowed her to have Zsa say, "My niece Paris Hilton got to where she is on her own two knees...") and the most elaborate Barbra Streisand I've ever seen an actual woman do. She left the stage, returning with a wig, fake nose and black velvet gown, getting lost in Barbra's Brooklyn accent and approximately her much, much bigger voice in a way that was pretty impressive (one extended note was lip-synched) and undeniably hysterical. "Barbra hasn't seen this," she later said. "Which is why I'm still alive."


Debbie did mention her daughter, Carrie, who she apparently called while she was getting gussied up as Barbra. "She'll be here in about three weeks with her show Wishful Drinking. I'm not sure if it's Broadway or Off-Broadway or...I think I'm Near Broadway..." (Some apparent backers in the audience quickly asserted to her that Carrie will be ON Broadway, thank you very much.)


The show drew to a close with warm applause. She shook hands with all of us in the front row and told me, "You're so cute!" Anyone wanting to get close to her had a chance as she slowly exited, yet the middle-aged Asian man who'd arrived with a bouquet of flowers never seemed to find the right time to bestow them upon her, leaving dejected moments later. My pride, and Joy.


I couldn't persuade a beleaguered assistant to let us get a picture with Debbie (a picture? we deserved scale wages for all we'd participated!), but I did get a shot with Joy Behar. I asked her now-fiancé if 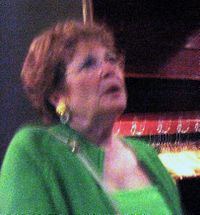 she would mind and he said it would probably be okay. I introduced myself to Joy and said I agreed with almost every word out of her mouth and would love it if she would pose with me. She consented (she seems totally the same as on TV, earthy) but then worried, "I don't think we should do a picture. This is Debbie's night." So I said, "I'm the gay guy from the show, I took plenty of pictures of her already!" and she laughed and said okay and asked if I had a good time. Her fiancé took our picture and we were off; José was already shocked at how bold I was, so I didn't further embarrass him by cornering Anita Gillette (pictured, inset) for similar treatment.


I did get to meet a bona fide Debbie fan, though he was not of the crazy variety; his fandom was spawned by a chance meeting with her in her casino days, when he spent two nights in a row until 6:30 in the morning listening to her talk about Hollywood.


This is what she does best, onstage or off, so her show was a treat even if she is not the most gifted singer ever to grace the room. She is, of course, Hollywood royalty and a living legend, yet she retains this quality of an outsider looking in, of a starstruck girl shocked to be in the company of Clark Gable (as she was when first arriving in Tinseltown). That quality, along with her many self-deprecating references, endears her to her audience and left us feeling like we'd met someone new, not like we'd seen someone perform. 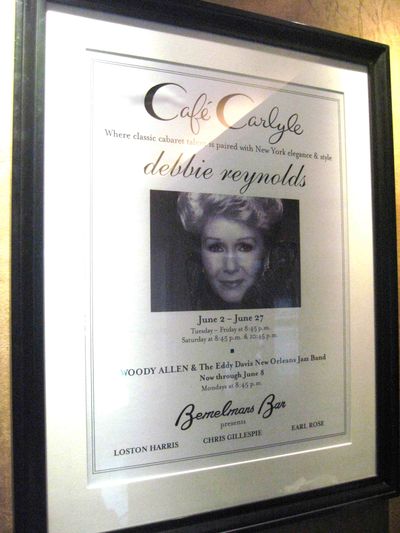