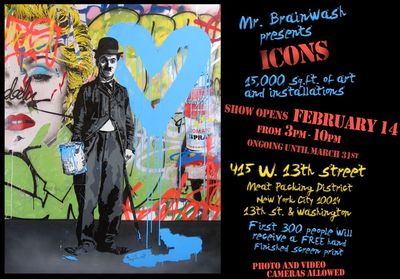 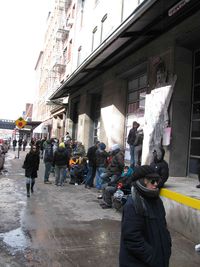 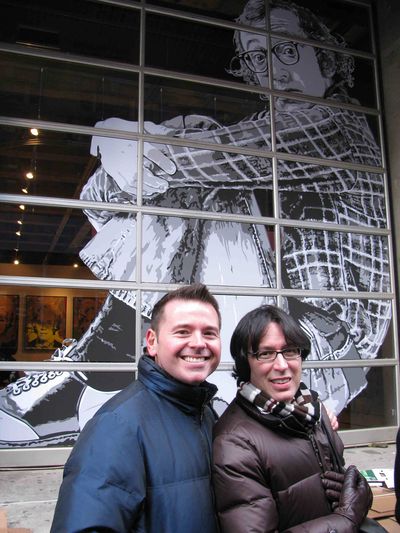 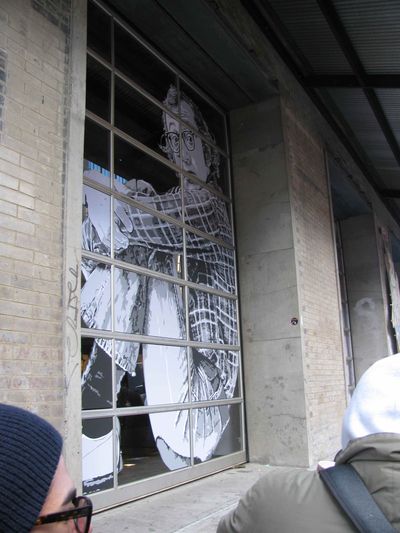 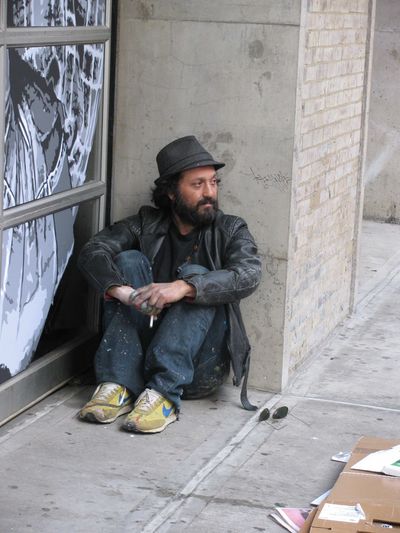 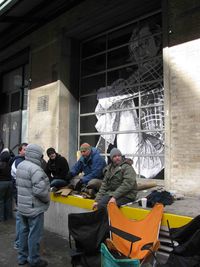 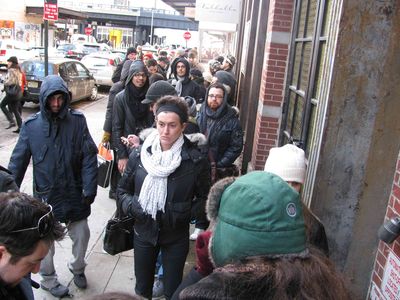 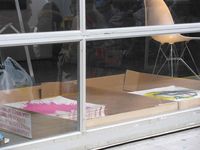 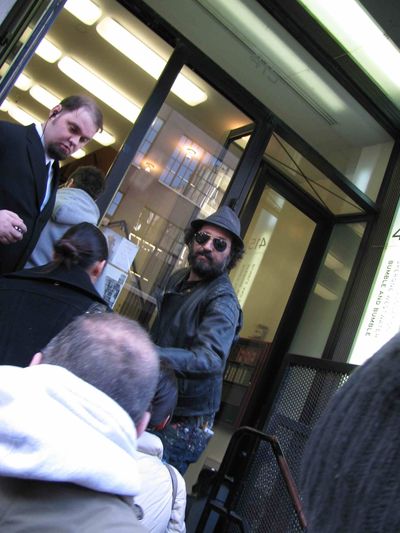 Unfortch, he hadn't even signed any of the prints yet! So that means he would have to sit there and double-sign (numbering on the back) every print, plus he was inking his thumbprint on each one. Oh, and it turns out he was giving away three prints plus the show poster to the first 100 and two plus the show poster to the next 200. So that's a fuck of a lot of time spent signing. That made him everyone's hero for caring and taking the time, yet it might have been better to have them all signed and waiting. 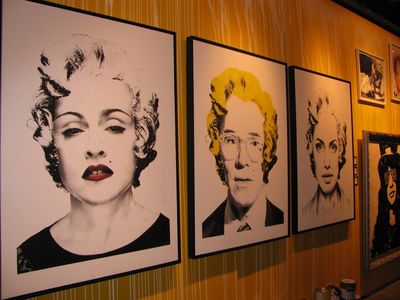 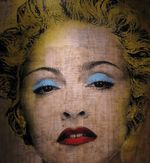 I was able to enjoy some of the first floor of the show, which included a spectacular wall of Madonnas faced by the gigantic original used for Celebration. Along with traditional silk screens, the show is packed with sculptures and installations. But I didn't get to do more than sample the show due to angst over how we'd get our prints. 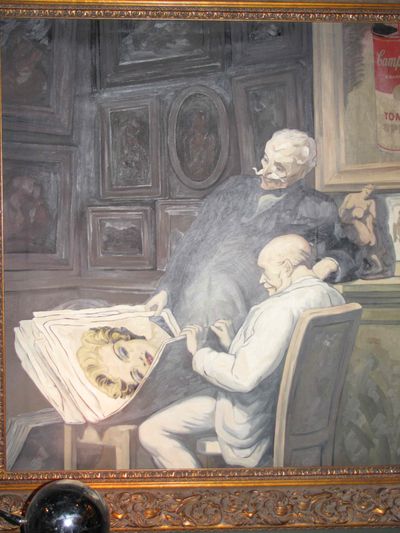 They decided to give out the prints in the original order of the line, but since things were so chaotic (the fire department arrived, scaring me that we'd be shut down) we and many others hovered close to the action, the front where he was patiently signing and signing and signing. 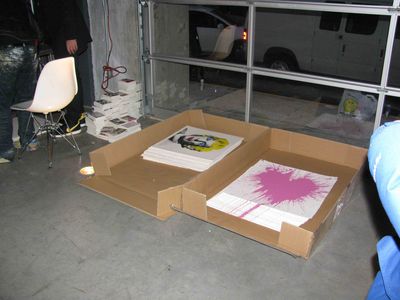 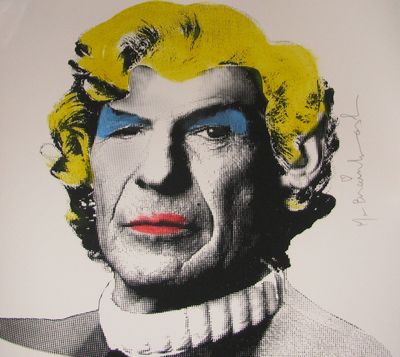 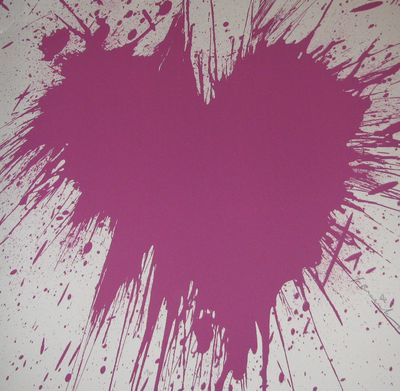 The scrub scalper dudes started running things, calling out numbers and urging people to step back. The lamest moment was when one chick with the ticket number 507 was asking to cut ahead of those of us who had tickets around 469 because she had dinner reservations. Everyone groaned and she was told to learn to count. 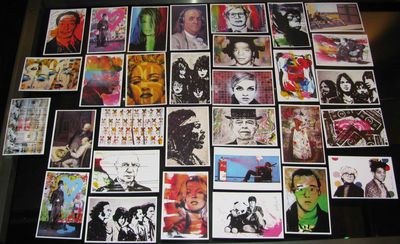 Finally, we were called up, and though my friend and I somehow were given pre-printed Staples tickets with identical numbers, we got our prints with no issue. I asked for some postcards and got a giant set of different cards! 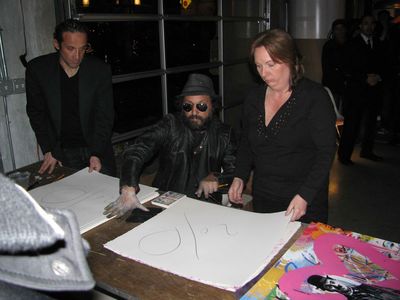 As chaotic and physically taxing as the effort was, they did really try to ensure that people who stood in the line got what they deserved, which was free stuff worth a total of close to $1,000 (the prints have already sold for $400 each on eBay and the poster for $150). 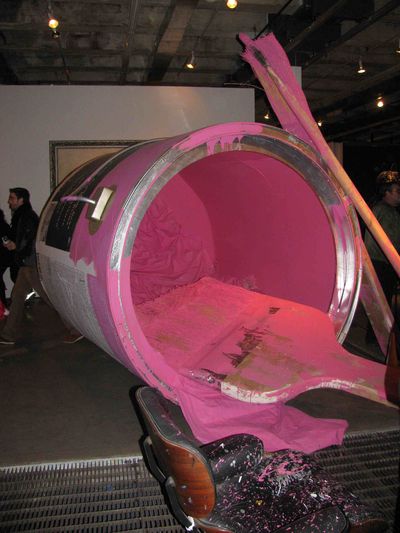 I'll go back to see the show. This kind of art is something I truly love, but I'm not above saying that seeing the art traditionally—walking around a gallery and staring at it on the walls—is almost beside the point. The art isn't beside the point...and there is a difference.