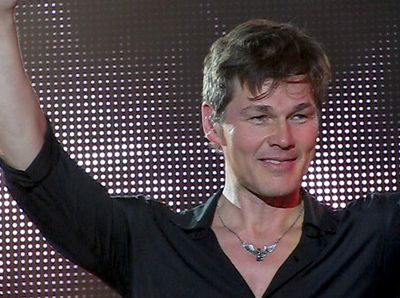 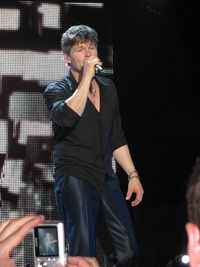 I had a disastrous experience at a pretty good concert that left me wondering if all general-admission shows should be gender-segregated. For me, the perception that girls attend these shows, get drunk, arrive late and then bitch that they're too short to see, thus demanding everyone part like the Red Sea, is one of those stereotypes rooted in reality. Like black people talking in movie theaters, Asians who can't drive and white guys who are xenophobic, misogynist hotheads.

The "Take On Me" finale

I've been a fan for 24 non-consecutive years of a-ha, a band that's been a band for 28 non-consecutive years. They broke up for a period but returned, whereas I convinced myself their debut album Hunting High and Low was practically the only thing they ever did until majorly rediscovering them in the early part of this century. Though that album is still one of my favorites (it might be my favorite album, period), and though some of their immediate follow-ups left and leave me cold, some of their '90s and '00s work matches their earliest, greatest hits. Their 2009 CD Foot of the Mountain is so good I presume part of the reason they have decided to break up forever following their farewell tour is communicated in its title: it's the Ending on a High Note Tour. 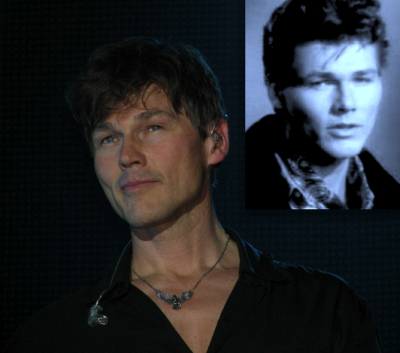 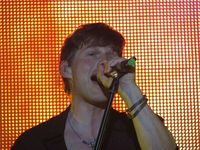 They're only playing L.A., Chicago, Toronto and New York in North America, which is fair enough—they're way more welcome in Europe and Latin America. I was thrilled to get a chance to see them a final time after my last viewing in Ann Arbor, Michigan, in 1986 (their next U.S. date wasn't until 2005!). I tried to interview them as a legit journo, but their PRs Girlie Action seemed to have forgotten how grateful they were for my early support of their then-unknown then-clients the Jonas Brothers, so no dice.

What does a-ha mean to me? Well, it means Morten Harket's emotive, occasionally operatic voice, Pal (now Paul) Waaktaar's incredible and incredibly undervalued lyrics. Mags Furuholmen plays a mean keyboard, too. There is something nearly perfect about many of their songs. "Take On Me" is of course one of the most perfect pop songs ever, but for me, it's not even one of my very favorites in their catalogue; I find their more contemplative, yearning hits to be the best of their best. Perhaps I like the contrast of seeing and hearing icy, superficially striking Morten emulating warmth and depth. 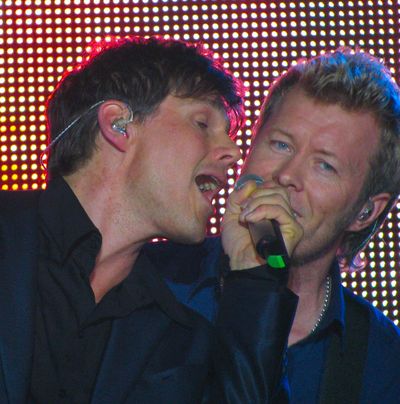 Anyway, I attended their third and final show at the Nokia in Times Square. Not considering myself a megafan like I am of Madonna's, I didn't feel the need to be first in line. Instead, I showed up 45 minutes before the doors time of 7PM only to find a line that wrapped around the building and ended at the exact spot where Faisal Shahzad had parked his four-wheel bomb. I was standing with tons of good-natured fans, the majority of whom were born in other countries—if one needs a passport as well as a ticket to get to a concert, that is dedication. 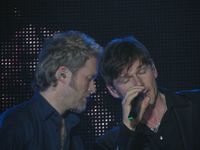 Once people funneled, in, I wound up about mid-floor of the tiny venue, which is about half floor and half open seating. I wasn't about to push forward, but I wasn't about to let anyone push past me, either. I chose a spot between two big bruisers, one of whom was cradling a GF. This was perfect—they wouldn't let anyone push them around and I could see perfectly between them. Of course, after hours of standing around, including through Sondre Lerche's lengthy and very late (and yes, well played) opening set, just before a-ha took the stage, a gaggle of girls and their extra-tall male companion pushed their way to the side of the bruisers. "Hello!" one said in an, "Oh, well, fuck you!" way. They wound up in front of the bruisers, gifting me with a giant, undeservingly well-placed head nearby. 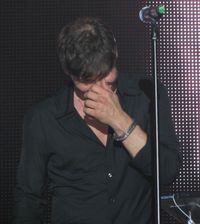 Next, a tall, fake-titted blonde pushed me from behind; she was only trying to go around, she said in universal Valleyspeak, and did not care for it when I pushed back against her and glared. "Go around," I said. "You're not going through me." Her response: "Oooh, you're not a fabulous gay, are you?" This didn't even offend me until I had time to think about it...how gross that this idiot has been coached by the media's well-intentioned effort to spotlight harmless gays (to show we're not monsters) as funny sidekicks into believing that gay men exist in order to air-kiss her ass and act as entertainers. 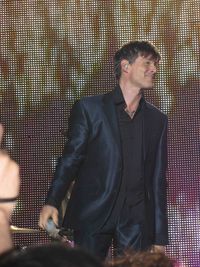 "Taking fabulous points off!" she sing-songed. But her teasing had a nasty, taunting quality. She knew she'd encountered a male who didn't want to fuck her and didn't find her fucking awesome. She kept pushing and then one of the bruisers in front of me deliberately fell back on her...not once, but twice in a row. The second time, he was rewarded with her drink thrown all over him, which he ignored. She was pissed and yakked about this whole scene for a long time, seething, "It's not like this is Madonna, front row! It's a-ha!" Exactly, so if you care so little, go home.

Then, another pair of idiot girls demanded to go forward because, "My friends are right there!" Foolishly, a fan to my side let them in. One of them proceeded to stand directly in front of the bruiser's GF, dancing up and down wildly with no concern about anyone else and hoisting a giant Brazilian flag. (A chick directly in front of me had a smaller but still view-busting version. Because, you know, a-ha gives a flying shit that they're from Brazil. It's important to communicate this to them, and it's possible to communicate this to them.) Another girl beside me dancing like a fool (good for her) kept deliberately whipping her long hair from side to side...not dancing with her hair flying around naturally, but planting her feet and whipping it. I felt like a fly losing a battle with a horse's tail. But I can and have to put up with all manner of idiotic behavior in general admission...just not pushing to get around me. 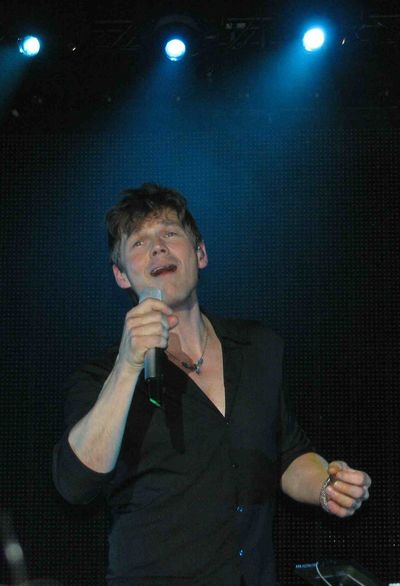 I am an obsessive filmer/photographer of shows, something some people find annoying. So I am courteous and never raise my camera in anyone's way. Flashes I can't help, but we're surrounded by those. I try, people!

By the way, I divined that it was happening but had no proof till I was home at 12:20AM—Blondie had taken some of her eyeshadow and rubbed it all up the seam and on the back pocket of my light gray Boss jeans, one the most expensive pieces of non-suit clothing I own. Fortunately, like her, it was ubercheap and washed out. 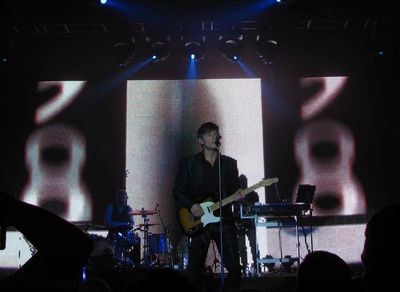 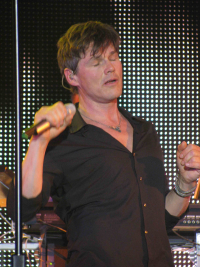 The show was solid, at times piercing and nostalgic. These guys are not flashy (I remembered them as a bit boring even in '86) and it seems obvious to me that Morten especially would rather be several other places than singing his a-ha catalogue late one Saturday evening in America. He has an iconic sexual vibe on stage that at times is magnetic and at other times switches to a slightly disinterested air. He knows his power over his fans and uses it in a way that suggested a contemptuous cat to me. (And later, after two nights of signing autographs after the show for fans, the group stood everyone up—on their last-ever NYC show!) His smiles are doled out stingily, but always when needed to keep us on the hook. His movements are at times a saunter and at times bordering on sleepwalking. But he can wail with the best of them, tackling all of his famous high-note numbers confidently. 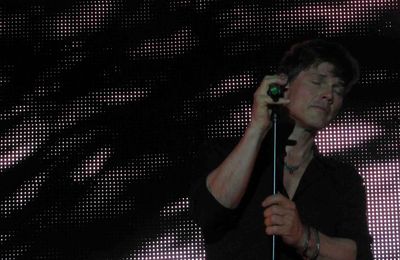 I was most excited to hear their new stuff (how often is that true of any concert?), but also certain of their most emotional songs like "Summer Moved On," "Forever Not Yours" and "Stay on These Roads." I could have traded the cash-in Bond theme "The Living Daylights" for "Living a Boy's Adventure Tale," which I think is my all-time fave a-ha tune and one of the few must-sings they must have forgotten. 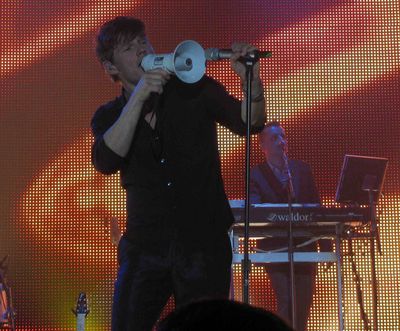 Does Morten make you bullhorny?

Morten dropped his mic once early on and seemed quite nonplussed momentarily before quickly grabbing it back up. I suspected it would have been a bad moment to be mic-free as the track that was used would have created a brief Ashlee Simpson scene, even if I would say he relied on a track far less than most, just choruses and probably some sweetening. 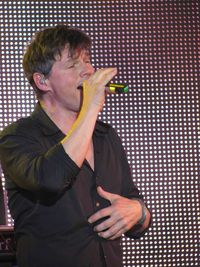 Toward the end, the chilly trio—do they like each other?—left, only to return with their only other American hit, "The Sun Always Shines On TV" and one of my other favorites, "Hunting High and Low." Another exit was perfunctorily performed before another return, this time to gift us with one last "Take On Me."

The sweetest moment was a ridiculously short montage of 25 years of a-ha. I'm guessing this was longer overseas, where people have more memories than just Morten dancing in a cartoon world. It felt like a real good-bye with its birth and death dates. It's surprising how many of their lyrics fit a denouement either literally ("I'll soon be gone now," "I'll be gone," "wave good-bye," "I'll be losing you," "summer moved on") or ironically ("stay on these roads"). 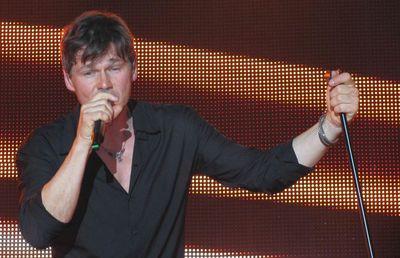 Twenty-five years and no longer counting

Finally, they were off after Morten cracked a smile for us and gave a triumphant bow. I know artists do farewell tours and come back anyway, but I tried to enjoy this show as much as I could, even with a disrespectful bimbo looming, because I think these guys really mean it when they wave good-bye.