Gotta Hand It To Zac Comments (26) 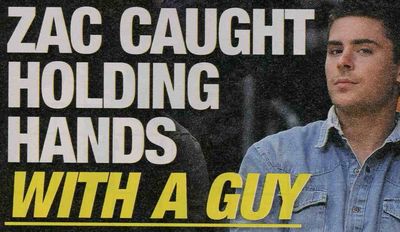 National Enquirer (March 14, 2011) claims Zac Efron has been spotted hand-holding with a dude at an NBA party at the W in L.A. on February 18:

"'I was shocked at how relaxed and open Zac was with this guy,' continued the fellow partygoer. 'He walked around talking to him, smiling and holding his hand right in front of everyone, including Vanessa. People were wondering if maybe it was a stunt to make Vanessa jealous. But truthfully, Zac really seemed into the guy.'"

The article claims that "Zanessa" are clearly not together, but are clearly still friendly.