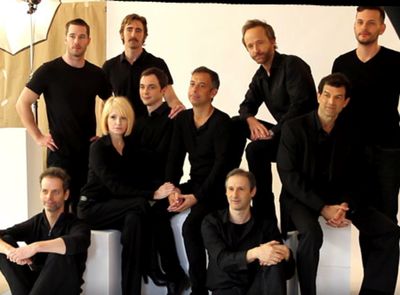 The reception at Sardi's was the fun before the tears. I went with José and we were able to hang out with our new friends Tim and Rob as well as bumping into writer/blogger/actor Jesse Archer (pictured), the only person I know who would bring poppers to The Normal Heart. I was also happy to meet Nathan from I'm From Driftwood (no, he didn't say, "I'm from I'm From Driftwood"...Jesse introduced us) and several others, all in good spirits and nervous about the potential emotional avalanche awaiting us. 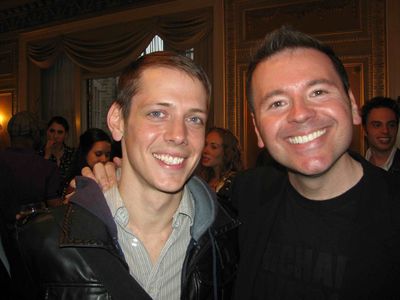 We had a lovely chat with Jordan Baker (Barkin's understudy, who had gone on that day due to Barkin being unavailable), who told us the company had had all of 12 rehearsals and performances prior to the performance we were about to see and who told us a couple of light stories from behind-the-scenes:

Loved her. She told us that she lost a brother to AIDS in '92 and recalled how draconian the hospital's practices still were, which shocked all of us. It is worth noting that she seemed to assume none of us in our small group might be HIV-positive; I wasn't offended, I just found it 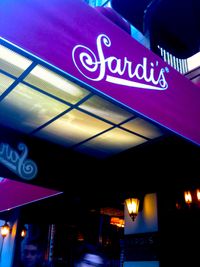 really interesting in the context of a play about a plague that might well have consumed every gay man and later everyone on the planet 30 years after its first impact.

Two from the production's team gave eloquent, heartfelt speeches (the first of many that night) about the importance of Kramer's play, urging us to urge you to come and see it—which I'm doing.

The play is minimally but beautifully staged in a way I won't reveal so you may experience it for yourself, but suffice it to say that the spare look lends the proceedings an uncanny sense of timelessness in spite of the action taking place, unmistakably, in the early '80s. 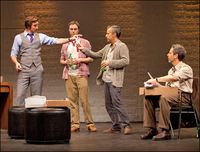 The Normal Heart mirrors the life of Kramer, whose stand-in is Ned Weeks (Mantello), as he attempts to fight the mysterious disease that is claiming dozens of his friends in Manhattan and to shame the city into acknowledging the problem and devoting resources to battling it. Weeks, as Kramer did with the GMHC, forms a support and advocacy group against AIDS, only to engage in a heart-breaking struggle over its direction with its duly elected president, Bruce Niles (Pace), an ex-Green Beret assimilationist, and fellow members and friends Mickey Marcus (Breen) and Tommy Boatwright (Parsons). 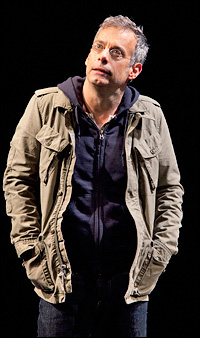 Weeks is a self-professed asshole—his belief is that action is impossible without egging on a reaction—and Niles is so uncomfortable with being labeled "gay" he's against using the word on their fledgling organization's mailers. It is their push and pull that makes the play as relevant as it is today. I had known next to nothing about the content of the play other than that it is an AIDS drama. Not that it isn't, but it surprised me how much it is also a documenting of the struggle we face within our own ranks to define "gay." Many of the same arguments are still being had today in the comments section of this blog, and even more so in the comments over at Joe.My.God. and Towleroad.

Ned's lover Felix Turner (Hickey) is also somewhat his opposite—a happy-go-lucky writer about style for The New York Times (not accidentallya paper that until recently wouldn't use the word "gay," insisting on the more clinical "homosexual")—but ultimately his soulmate, and someone who, like most of the men the play is about, will get sick and die long before the virus is even understood. In a touching way, the brief and intense love relationship between Ned and Felix is a tragically sped up version of a traditional marriage with all its ups and downs and ego trips and arguments, until death—which happens impossibly sooner than normal—do they part.

In the trenches with Ned is his female counterpart, the take-no-prisoners Dr. Emma Brookner (Barkin). Confined to a wheelchair due to a childhood bout with her own demon virus—polio—Brookner is as blunt and insistent as Ned, demanding in vain that the federal government find money for research. Her maneuvering is all the more impressive considering she's seated. 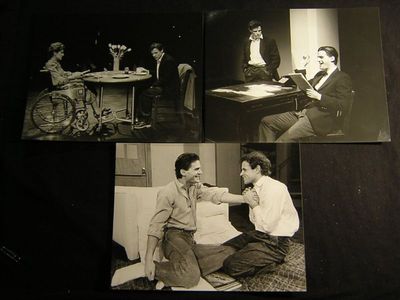 "The only way we'll have real pride is when we demand recognition of a culture that isn't just sexual. It's all there—all through history we've been there; but we have to claim it, and identify who was in it, and articulate what's in our minds and hearts and all our creative contributions to this earth. And until we do that, and until we organise ourselves block by neighborhood by city by state into a united visible community that fights back, we're doomed."—Ned

But as Niles argues, there was (and is) a huge sector of the gay male community that values total sexual liberation to the point where it's become an identity. "You can't tell people not to have sex," he argues, while the other side can only say, "We have to."

There are also contemporary-feeling arguments in the play regarding marriage equality and the need for gay people to come out of the closet. Both Pace and Parsons are rumored to be gay in real life, and both are said to make no bones about it privately, yet neither is on the record as being out. If true, I hope that changes because The Normal Heart only further proves their talent and both would be wonderful aspirational figures for any gay kids wondering if it gets better.

As tough as Kramer is known to be, I was surprised that his play—despite being about a period of his life filled with betrayal on top of illness and fear—was not one-sided. True enough, the play takes the position that Ned Weeks may be flawed, but is correct. But Bruce and Mickey, adamantly opposed to Ned's way of doing things, are presented sympathetically, empathetically, and each has a speech that is deep, raw and real. Pace in particular moved me—I just can't imagine him not being rewarded with some kind of honor for bringing to life the casually sexy, principled, hedonistic yet conservative man who could be a stand-in for so many similar gay men today. 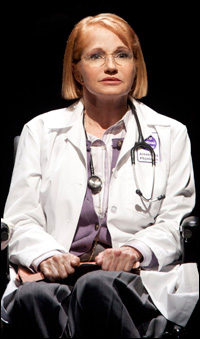 Barkin is superb, Mantello is truly the heart of the play (making Ned f not wholly likable then at least someone we are rooting for, someone whose heart is both normal and in the right place) and Hickey gives a performance that matches Pace's in its emotional complexity and nakedness.

Parsons's low-key Southern queen is a scene-stealer—I'm not sure of his history on the stage, but he was extremely comfortable and one of the plays many surprising sources of welcome humor.

It's an odd thing to be able to say as a 42-year-old gay man, but AIDS has not touched my life in the same way it has touched the lives of so many of my peers. I never became HIV-positive, nor did any of my friends (that I know of). I have since met people who are HIV-positive, but I managed to escape the kind of devastating impact I feel sure I would have experienced if I'd been born in 1958 instead of 1968. I feel very lucky, but I also feel lucky to be a part of a community that, as fractured as it can be and as decimated as it was beginning in 1981, can trace its heritage through some of the great artists Ned Weeks lists toward the end of The Normal Heart.

One artist Weeks leaves out is Kramer himself, who may not be as warm and fuzzy as too many of us demand of our favorite icons these days, but whose passion and whose creation The Normal Heart are things that really make you sit the fuck up and pay attention, things that force you to think and things by which you can't help feeling moved.

As we left, we were handed this letter from Kramer, which he wanted audiences to read after having seen his work: 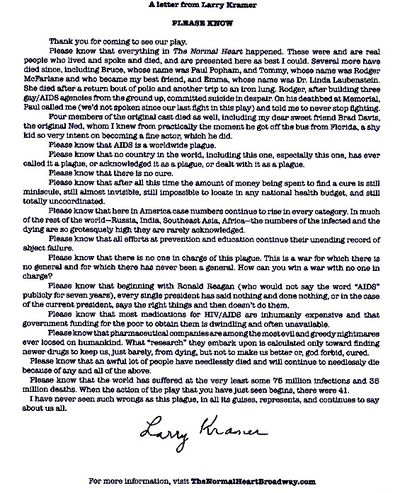