Blood And Sand: A Review Of Other Desert Cities + Stage-Door Follies Comments (8) Got everyone but Keach

For my birthday, José got us tickets to Other Desert Cities, the brilliant Jon Robin Baitz play directed by Joe Mantello and starring Stockard Channing, Judith Light, Stacy Keach, Rachel Griffiths and Justin Kirk. As part of the gift, I made him be my assistant fanboy at the stage door, something I've only done three or four times ever.

The show bubbles to the top of the genre of shows featuring cerebral families who sit around saying profound things as opposed to making banal chit-chat and watching reality TV thanks to searing, complex performances and a timely subtext involving conservatism.

Lyman and Polly Wyeth (Keach and Channing) are former Hollywood folks who, like the Reagans (a lot like the Reagans) have listed to the right in their old age. Decades ago, their eldest son committed suicide after getting mixed up with war protesters who detonated a bomb, killing a man. In 2004, their damaged daughter Brooke (Griffiths), home for the holidays along with her brother Trip (Kirk), has dropped a bomb of her own, announcing she's written a scathing family memoir that's about to be published in New York. Polly's lefty sister Silda (Light), who recently fell off the wagon, is staying with the Wyeths during this, their darkest hour—and there's nothing more dangerous than a smart, fearless drunk.

Other Desert Cities (the title refers to a road sign near Palm Springs but could also refer to the places in Iraq that were being bombed back to the Stone Age at the time) definitely chooses sides when it comes to references to weapons of mass destruction and Colin Powell's questionable integrity, but while Channing's Polly is emotionally relentless, she's written with wonderful shades and at play's end will be someone any audience can understand. That she doesn't remain a nightmarish lady who lunches is a credit to the writing and to Channing, who's got to be on the verge of a Tony for her gutsy, beautifully modulated performance; it's really more of a slow reveal.

Light is every bit her equal, trading barbs that are wickedly delicious but that obviously come from a long-lost place of love. "How do you love someone who became someone else?" Silda asks her distant, demanding sibling, but Polly might ask the same of Silda, whose alcoholism has undoubtedly changed her even if she herself can't see it.

At times, watching Rachel Griffiths called to mind seeing her in Brothers & Sisters, but of course she is channeling Patti Davis, who really did write a (much less devastating, but still disloyal) book that revealed uncomfortable Reagan-family secrets. In spite of those easy-sounding references, her Brooke is a bundle of raw nerves, achingly sensitive without being—contrary to her mother's declaration—another "whiny liberal."

Kirk, in his very first night in the show, was terrific as Trip, a voice of reason as wounded as anyone in this family drama even though he was only five when his big brother went nuts and ruined their lives. Stacy Keach is perfectly cast as a big-screen tough guy who moved on to being a GOP county chair. He's so charming it's hard not to like him regardless of whether you agree with his politics, and yet his relationship (and his pact of secrecy) with his wife make him as complicit as anyone in the intricacies of why the Wyeths are as dysfunctional as they are.

This is not to say Other Desert Cities is a tough slog; in fact, it has many laughs and leaves you with hope. Hell, it's a smart play that gives Stockard Channing and Judith Light the roles of their careers, already more than I could have hoped for.

During intermission, José spotted Desperate Housewives corpse Jonathan Cake. After, as we waited at the stage door, we noticed Cake was in a group with Matthew Broderick and Nathan Lane! (Broderick posed with one guy while Cake, unrecognized, gamely did the honors.) Then Mariska Hargitay and hubby exited. We also saw Baitz and Mantello. It was quite a full house back there. 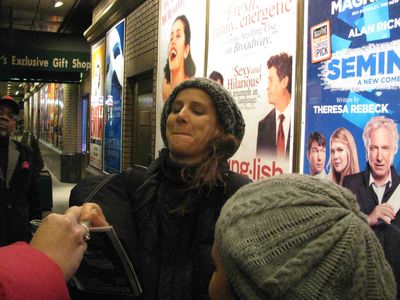 Rachel Griffiths came out first. She was sweet but warned us all she had a stomach bug we did NOT want to get so she was signing Playbills from a distance. I asked if she'd take a distant photo with me and she agreed—it's hysterical! She's like four feet behind me. I was the only one she "posed" with: 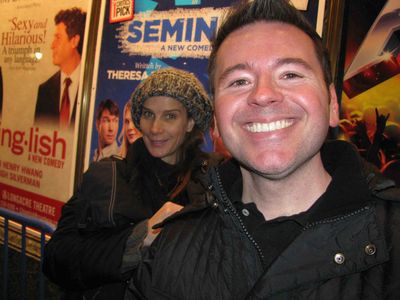 Laugh if you will, but I won't be getting gastroenteritis

Next up was Stockard Channing. I'd just finished watching The Girl Most Likely To on YouTube (the irresistible, Joan Rivers-penned 1973 revenge comedy) on YouTube so was extra-stocked. She was totally gracious, signing for everyone and taking not one but two photos with me when the first one caught her offguard. 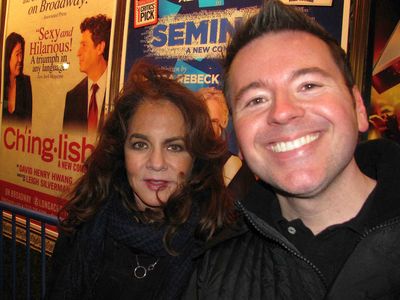 There are worse pictures I could take

After that, the barricade was taken away and most everyone left, but we hung out and a in a few minutes Judith Light came out. She was apologetic for making us wait and couldn't have been more enthusiastic, pulling us in for close hugs in the photos and thanking everyone for coming out. After having seen her on the street and at a couple of David Mixner events but never feeling it was the right time, it was finally the right time.

Finally, Justin Kirk came out last—it was his first performance so he'd been getting notes. Man, he is cute! On stage, I kept thinking he had a slight Ed Helms goofiness (that worked) and that his voice sounded like Tom Hanks, so I wasn't focusing on the important thing—his hotness. He was really nice and chatty in a very normal way (not in a way that acknowledged he is an actor and you are standing there waiting to get his picture). I told him he was fantastic in his first performance and he said, "You were scaring me, you and all your friends," very sheepishly. But he has nothing to worry about. Loved him. 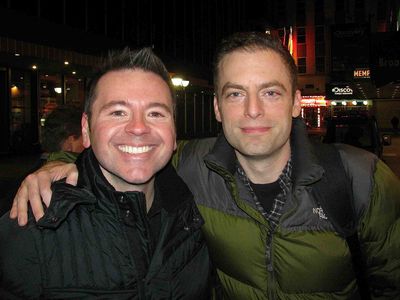 Touched by an Angel in America

Thanks to José for the great birthday gift!

Posted at 7:34 AM in STARRY-EYED, THEATRE, THEATRE REVIEW | Permalink | Comments (8)