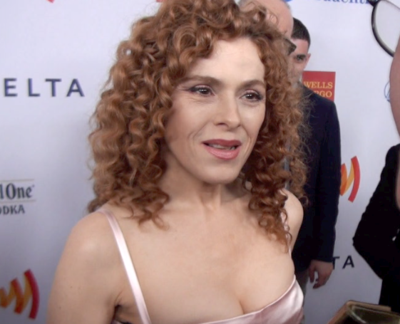 The 23rd Annual GLAAD Media Awards at the Marriott Marquis last night was a fun time once I decided I was for sure not dashing to Connecticut to support a friend's event starring Mickey Rooney. I'd already committed to GLAAD and couldn't quite wrap my mind around three hours (both ways) of travel for an hour of notoriously curmudgeonly Rooney fielding questions about his career and undoubtedly griping about the filth that passes for entertainment today, but I was happy to hear later that Mickey's gig was a treat in the end. 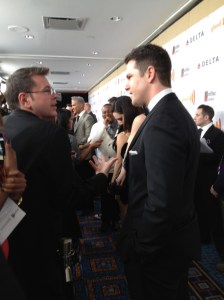 Here I am interviewing Thomas Roberts (photo from here)

José was my camerman (which removes a lot of the stress; having to stick a video camera directly into someone's face is awkward, especially when they're not performing sexual acts and high on whatever people get high on these days).

He and I and everyone I ran into were kvetching about how tired we were, didn't wanna do this massive red carpet, etc. But it wound up being rather cool.

I was next to a really fun girl whose hair, nonetheless, kept creeping into my face and all over my body (she had a mane on her). At one point, it worked itself under my MEDIA sticker and tugged it partially off like one of those cartoon vines. She apologized and I accepted, but I have enough hair all over me. 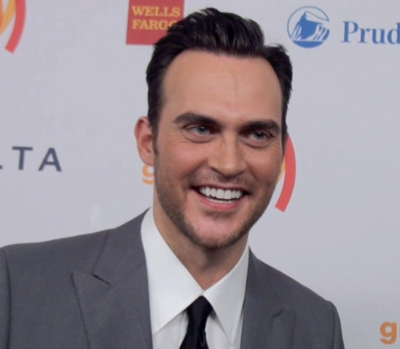 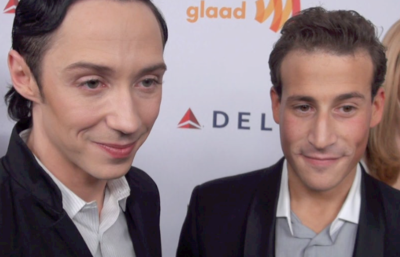 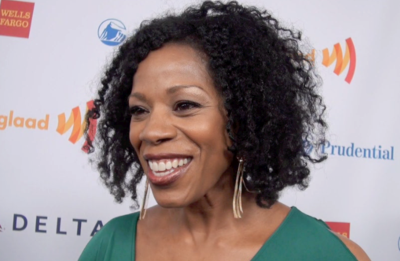 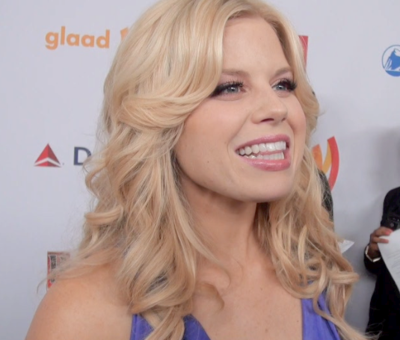 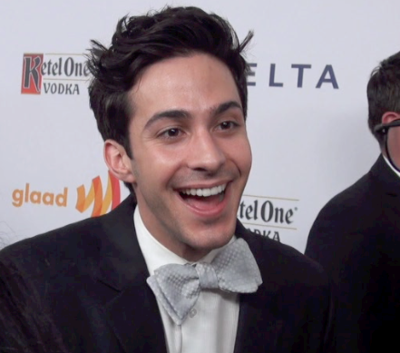 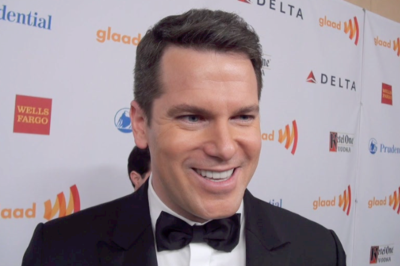 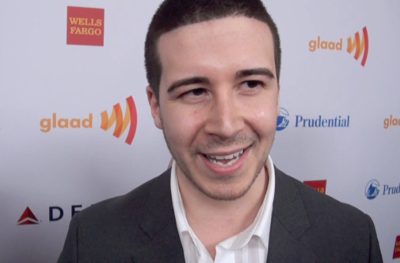 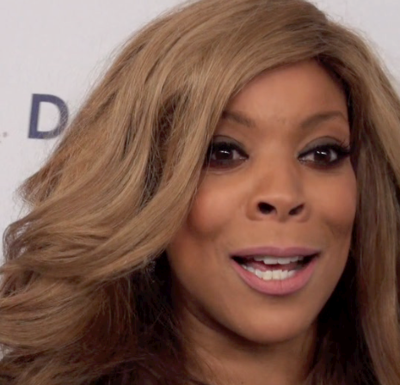 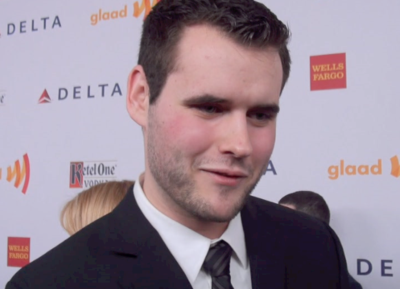 Big stars like Ellen Barkin and Gilles Marini (the latter of whom will do the L.A. event instead) had canceled, but we grabbed: Vito Russo winners Neil Meron and Craig Zadan (charming men who told me their greatest contribution to gay visibility in their careers was Serving in Silence: The Margarethe Cammermeyer Story); Johnny Weir and his husband Victor Voronov (they recommend marriage); Phillip Spaeth of Smash (in possession of a head of hair with which I could rule the world

were it mine...he is gorgeous and adorable and did I mention cute, and a dead ringer for Parting Glances star Richard Ganoung); Kim Wayans (SO COOL, and gamely said that Men on Films would give her movie Pariah, "Two snaps up!"); Wendy Williams (who came last and only did pooled questions so just blurted "yes!" when I asked if she'd always been close with gays); YouTube sensation Zach Wahls (I think I could get him to swing—he's THAT good at playing to his audience); Thomas Roberts (coyly denying he would leave journalism for acting); Jersey Shore's Vinny Guadagnino (sexy in a Mark Wahlberg way and sweet); Megan Hilty (glamorous as hell and young enough that she doesn't even comprehend the idea of being especially close with gay people, as in, why wouldn't she be?); Carson Kressley (as usual, funnier than I think he'll be); and Cheyenne Jackson (stunning, but kinda bored with my questions). 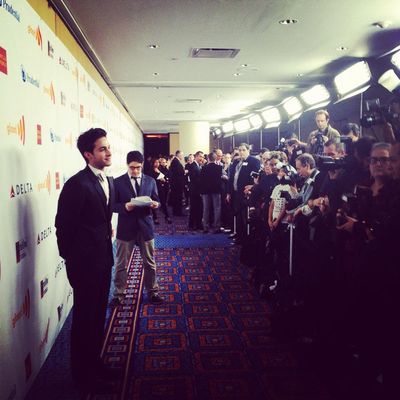 I was also pleased to get Bernadette Peters for a few quick questions. She looks incredible, even close up. I told her I've been with her since All's Fair (click here, Crenna talks about her at 8:15), her '70s sitcom with Richard Crenna. She didn't react much to that! (As a little kid, I recall sneaking out of bed and hiding in our kitchen so I could peek over the bar to watch the show as my parents watched it. I would fall asleep and wake up the next morning in bed—busted!) I asked her how representations of all things gay have changed since then and she fixated on Ellen DeGeneres as the first gay representation on TV that she could recall.

I never saw John Stamos, Tracey Gold or Annette O'Toole in the press area. Anti-gay scum! (Kidding.) But on the bright side, I did see that Towleroad (sharing with Mombian) won for Outstanding Blog. 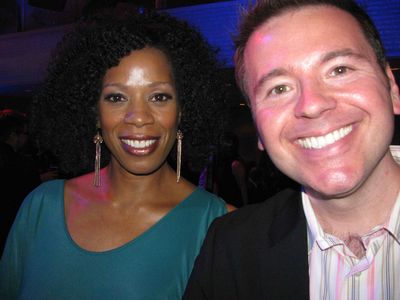 Kim Wayans is a delight (but I ain't one to talk so you didn't hear it from me!) 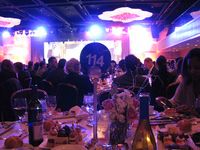 After, the press were invited inside for dinner (a first) and the show. Our meal was delish and we were seated next to funny Micah Jesse, "the East Coast Perez Hilton." While scouting the room to see who was there, I ran into Kim Wayans posing for a picture with two fans. It was the right moment, so I asked if she'd do the same for me. "I didn't want to ask you on the press line and be all unprofessional," I told her. She smiled and said, "Oh, you mean like the woman who asked me to be in her project there? Talk about putting your money on the line!" She was just so great and it's hard to believe she's 50. Hasn't aged an hour. 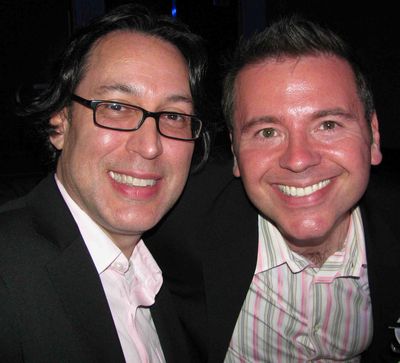 I left Bernadette alone as she was in the very front and ensconced amongst many power gays. Saw my pal Sergio Kletnoy, but couldn't get his attention. His signature baseball cap makes him spottable anywhere.

For all the details on winners and more about the show, click here.