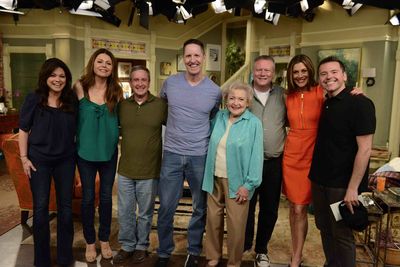 Last weekend, right after hightailing it out of Phyllis Diller's home/art gallery, my starfucker pack and I drove over to CBS Studios, where Brian had gotten us in for a taping of Hot in Cleveland. (Here's how Valerie Bertinelli describes such an outing. Here's a photo album.) This is a show that has steadily grown on me; I think it's got sharp barbs and superb talent, enough to make it a pleasure to watch even when it's having an off episode.

We arrived on time (somehow) and quickly discovered Brian's photo op with Betty White (which he'd earned by virtue of an encounter with Ms. White at a signing and a subsequent correspondence with her assistant, one that generously included a donation to her foundation) was going to mean he'd sit apart from us so he could be escorted to a meet-and-greet with Betty after. I wasn't too crushed as I've met her twice and already have an astoundingly great pic-with co-starring Ms. White, but Rich and especially Don were hoping Brian would be able to spread some of his down home fairydust on the situation.

We got to go in almost first. The studio audience is shockingly small...maybe 150 people? The sets, so surreal to see them in person, are in front of and well below the audience—it reminded me of when, as a kid, I'd go get autographs from baseball players at major-league games. There would be no autographs this night, though the little programs they handed out—printed on porous white cardboard—practically begged for them.

The warm-up guy is Michael Burger, and did he have his work cut out for him. From the moment we went in to the moment we returned to our cars, it took six hours! So he had to fill that time—including moments between scenes, not just before and after the taping—with non-stop banter, jokes and contests to keep the audience from regretting the time committment. His only misstep was a rather sharp rant about how when he was a kid, there weren't so many safety rules in place and we all grew up just fine. See, some of us didn't; they died and that's why they're not here anymore. I don't like that kind of humor. It's very conservative-slanted to me, like anti-PC stuff. But otherwise, hat was off to him. 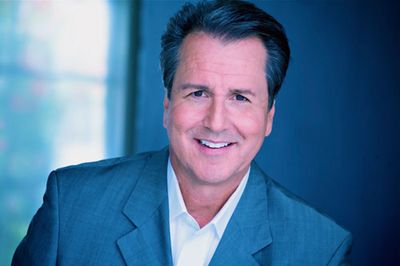 A couple of cute guys, Robert and JP, sat behind us, somewhat younger than us. One was wearing a funny Betty White shirt and confessed he was dying to meet and get a picture with her. Both would also be at the following day's Hollywood Show. When Brian went and sweet-talked his on-site contact into letting the rest of his party join in on his photo op, I could read her lips so leaned over and told Don. Don was so excited (this is a man who's met Anita Page and just about everyone who ever made a movie or filmed a TV show) he couldn't resist leaning back and telling our new friends of his good fortune. Rub it in!

The ladies emerged and acknowledged us, as did guest star Regis Philbin (who seemed rather less excited), who was playing a flamboyant hairdresser who hits on Betty White's character all the time and is eventually revealed to be straight after all. David Spade's scenes had been shot the previous day; good thing, too, because we'd have been there another week if we'd had to witness those being taped.

The women were really funny and sharp. It was odd watching them do it live and seeing it on TV screens simultaneously. It all seemed so finished, even when they (and by "they," I mean Valerie Bertinelli...almost every time!) goofed or when they stopped and were fed improved lines or revised stage directions.

But as fun as the show was, even the scenes shot over and over (loved how one Wendie Malick crack about a store's meager celebrity photo collection being limited to "Corporal Klinger" morphed into "a Klingon"), the best part would have to be the ridiculous audience games.

I won some Hot in Cleveland swag by correctly spelling "Schwarzenegger," but only when I couldn't stand it after five others bombed out. This put me in front of everyone and opened me up to Burger's wisecracks about my dayjob, but was worth it.

But when he announced a dance-off and lie-promised an autograph to the winner (the only thing that would motivate Brian), I knew there would be trouble. We had a sexy 18-year-old girl in a short skirt, an old lady who'd just recovered from abdominal surgery and good ol' Southern-fried Brian, who is as gay as is legally allowed...and not shy. I told Don that shirt would come off, and when "Sexy and I Know It" blared, off it came. Brian did a mean limbo and straddled the bar separating us from the talent, catching Valerie's perplexed eye and shouting to Regis. (Regis later cracked that he'd found it "disturbing.")

And wouldn't you know that they called it for the old lady anyway? I think it was at worst a tie, but she did do a pretty decent swim, albeit to "The Twist."

During a TV theme songs challenge, Robert was called up and his shirt was brought to Betty's attention. Charmingly, she came over and greeted him and said she should find a way to sell his shirt. I'm so glad he got that face time with Betty! The game was harder than you think—they had current theme songs to stump the oldsters and ancient theme songs (Robert crapped out on Sanford & Son) to knock off the relative youngsters. Sadly, the winner got a cast-signed script, the prize Brian had shaken his moneymaker for.

As the show wound down, we were called to the side of the audience and led directly onto the stage, where the cast did photos with us right in front of the entire jealous audience, all of whom were trying to get the actresses to come over to them. I was by Wendie and asked her what her secret was (this chick is 60 and looks 40). In her inimitable voice, she said, "Well, I like to think it's a combination of good genes, eating right and lots 'n' lots of laughter." I then greeted Betty (who came alive when I shook her hand as if she knew me, what a bundle of sunshine that dirty old lady is) and then quickly thanked Jane Leeves and Valerie, who were sweet. Valerie is more of a bombshell in person and stayed longer than the others. I would've had copious video and photos, but they wouldn't let us bring cameras or cellphones in and we hadn't wanted to risk it. (The rest of the audience seemed to have smuggled in everything from brownie to Super 8, and I'm pretty sure I saw a dude crafting daguerreotypes in the corner.)

We left on a high, having snagged one of the most coveted pic-withs currently available in the world today—Betty White & co., and on the set of their show, no less.