Beating Off Together: 150 Gayest Songs EVER (The Links) Comments (0) 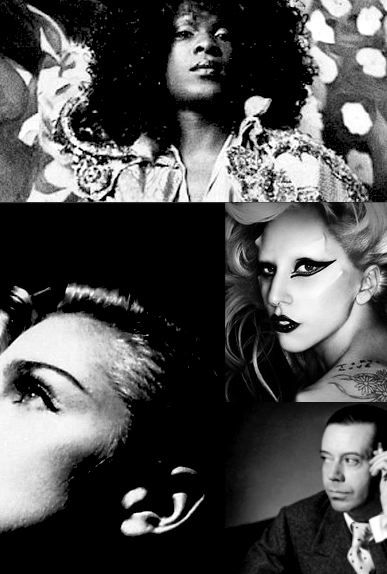 Here are the links from my original post, arranged somewhat thematically or at least for flow.

There are 150ish videos that follow, so prepare for a long load time.

Again, feel free to tell me what am I missing, in both senses of the question...

"You Make Me Feel (Mighty Real)" by Sylvester

"Over the Rainbow" by Judy Garland

"I Feel Love" by Donna Summer

"Ode to a Gym Teacher" by Meg Christian

"Crucified" by Army of Lovers

"Getting Away With It" by Electronic

"Dancing On My Own" by Robyn

"(Theme from) Valley of the Dolls" by Dionne Warwick (and k.d. lang)

"I Want to Break Free" by Queen

"Losing My Religion" by R.E.M.

"There But for the Grace of God Go I" by Machine

"I'm Still Here" by Yvonne DeCarlo (and many others)

"You Think You're a Man" by Divine

"Where Is My Man?" by Eartha Kitt

"The Man That Got Away" by Judy Garland

"Go West" by The Village People

"Outside" by George Michael

"Whispering Your Name" by Alison Moyet

"Your Disco Needs You" by Kylie Minogue

"Chains of Love" by Erasure

"I Love the Night Life (Disco 'Round)" by Alicia Bridges

"You Don't Know Me" by Armand Van Helden

"Glad to Be Gay" by Tom Robinson Band

"There's More to Love" by The Communards

"Take Me on the Floor" by The Veronicas

"Love Sensation" by Loleatta Holloway/"Ride on Time" by Blackbox

"I Want to Hold Your Hand" by T.V. Carpio (Across the Universe)

"Don't Leave Me This Way" by The Communards

"Pull Up to the Bumper" by Grace Jones

"Relax" by Frankie Goes to Hollywood

"Come Home With Me Baby" by Dead Or Alive

"Walk on the Wild Side" by Lou Reed

"What Makes a Man" by Marseilles (originally by Charles Aznavour)

"I'd Rather Be Spanish Than Manish" by Jean Malin

"I'll Tumble 4 Ya" by Culture Club

"Deep in Vogue" by Malcolm McLaren

"Got to Be Real" by Cheryl Lynn

"Let's Have a Kiki" by Scissor Sisters

"Supermodel (You Better Work)" by RuPaul

"I Enjoy Being a Girl" by Christine Jorgensen

"Pretty Boys and Pretty Girls" by Book of Love

"Girls and Boys" by Blur

"No Condom No Sex" by Cruise Control

"Why?" by Bronski Beat

"Come to My Window" by Melissa Etheridge

"It Ain't Necessarily So" by Normie Rowe

"Can You Forgive Her?" by The Pet Shop Boys

"Lola" by The Kinks

"You're the Top" by Cole Porter

"Big in Japan" by Alphaville

"Never Let Me Down" by Depeche Mode

"Damn I Wish I Was Your Lover" by Sophie B. Hawkins

"You've Got to Hide Your Love Away" by The Beatles

"Prove It On Me Blues" by Gertrude "Ma" Rainey

"Love in the Shadows" by E.G. Daily

"Safe in the Arms of Love" by Shooting Party

"Boom, Boom (Let's Go Back to My Room)" by Paul Lekakis

"We Are Family" by Sister Sledge

"My Dad" by Paul Petersen

"Kill Your Sons" by Lou Reed

"This Charming Man" by The Smiths

"Johnny Are You Queer?" by Josie Cotton

"The Lumberjack Song" by Monty Python

"He's So Gay" by Frank Zappa

"Macho Man" by The Village People

"Give Me a Homosexual" by Romanovsky & Phillips

"I'm So Beautiful" by Divine

"A Little Respect" by Erasure

"I Wrote the Book" by Beth Ditto

"Express Yourself" by Madonna

"Born This Way" by Dusty Springfield

"Any Other Way" by Jackie Shane

"Born This Way" by Lady Gaga

"Two Faces Have I" by Lou Christie

"I'm Coming Out" by Diana Ross

"I Am What I Am" by George Hearn

"Love You Better" by God-Des & She

"I'm Every Woman" by Whitney Houston

"I Kissed a Girl" by Jill Sobule

"Keep on Livin'" by Le Tigre

"Where the Music Takes You" by Ari Gold feat. Sasha Allen

"He's So Unusual" (from the film Sweetie) by Helen Kane

"Fuck You" by Lily Allen

"And I'm Telling You I'm Not Going" by Jennifer Holliday

"I Will Survive" by Gloria Gaynor

"YMCA" by The Village People

"So Many Men, So Little Time" by Miquel Brown

"It's Raining Men" by The Weather Girls

"Do You Come Here Often?" by The Tornados

"Outlaws of Love" by Adam Lambert

"Don't Rain on My Parade" by Barbra Streisand