"Diamonds" And The Girls' Best Friend: A Review Of Rihanna's 777 In NYC Comments (5) 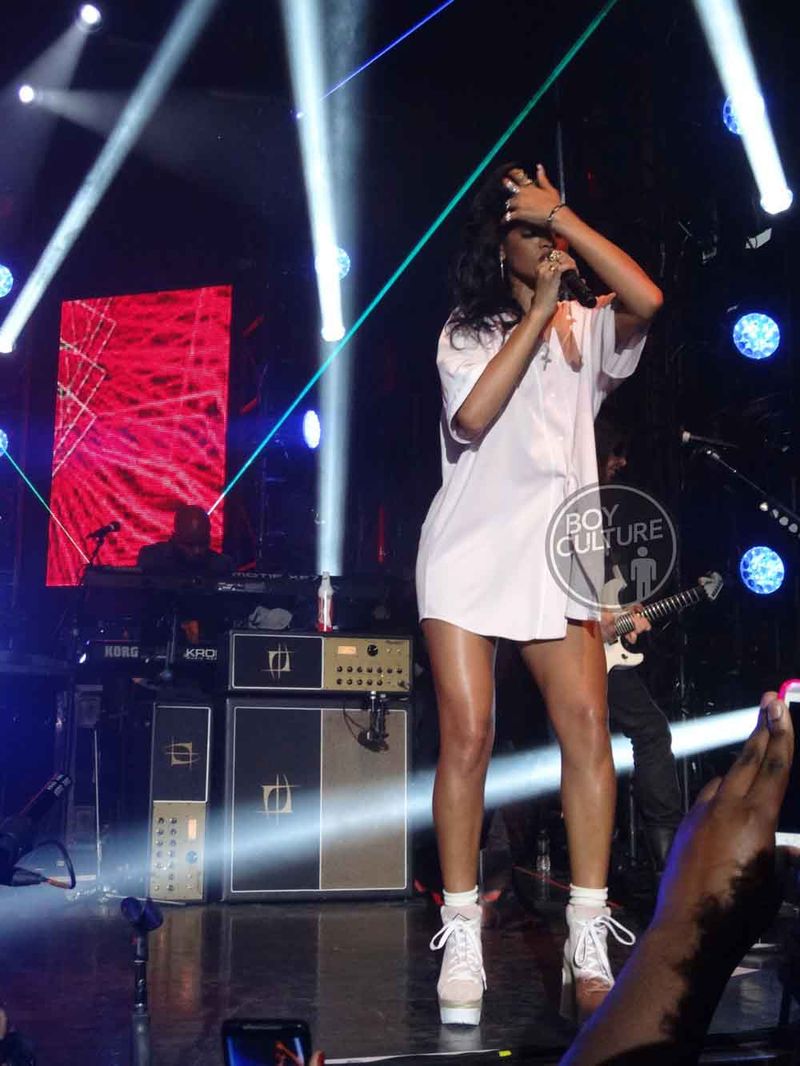 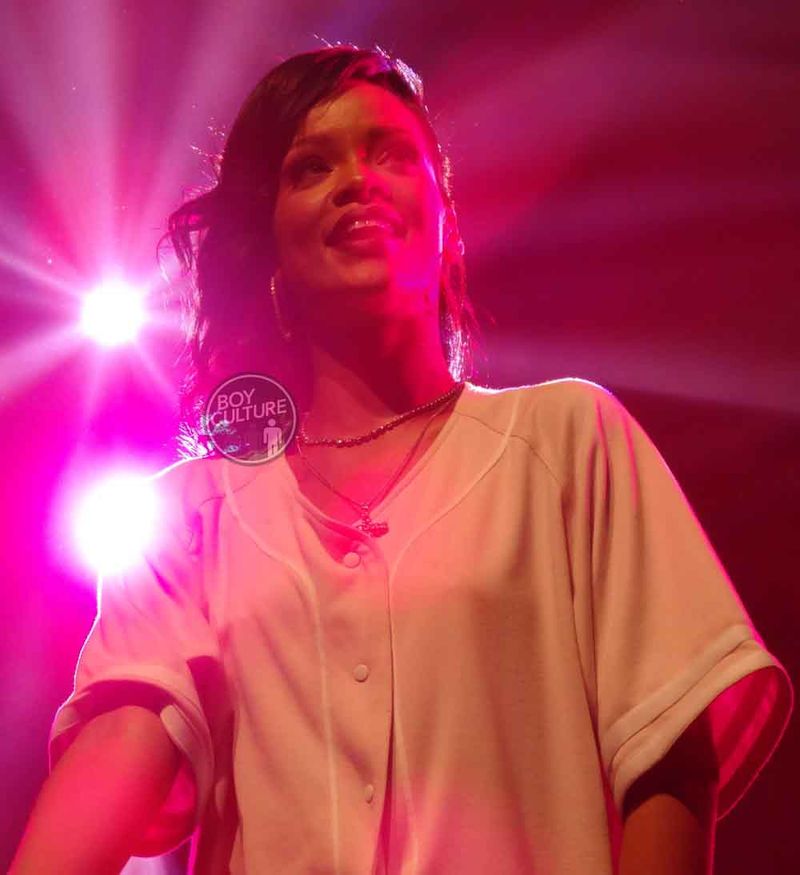 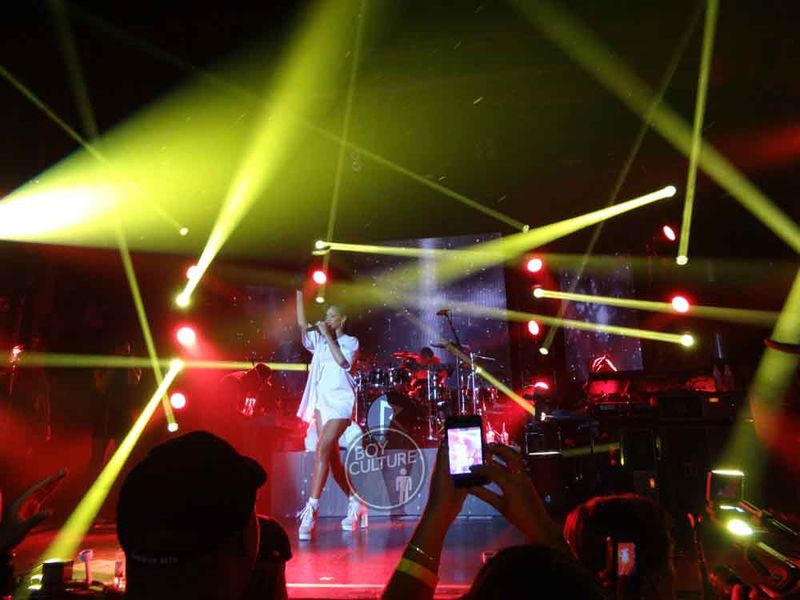 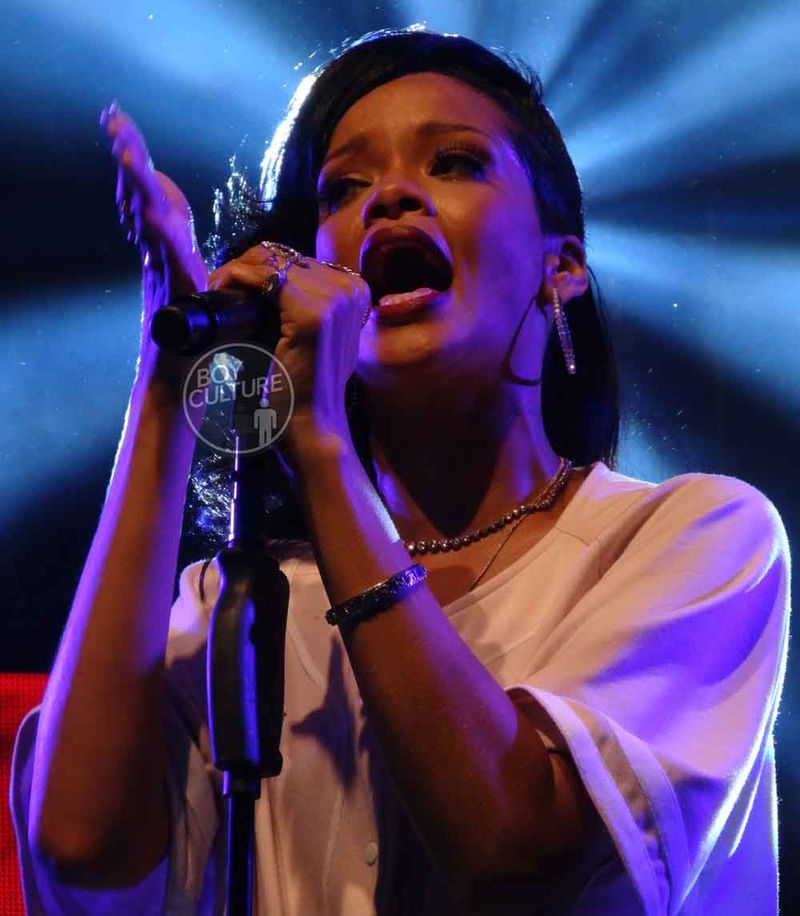 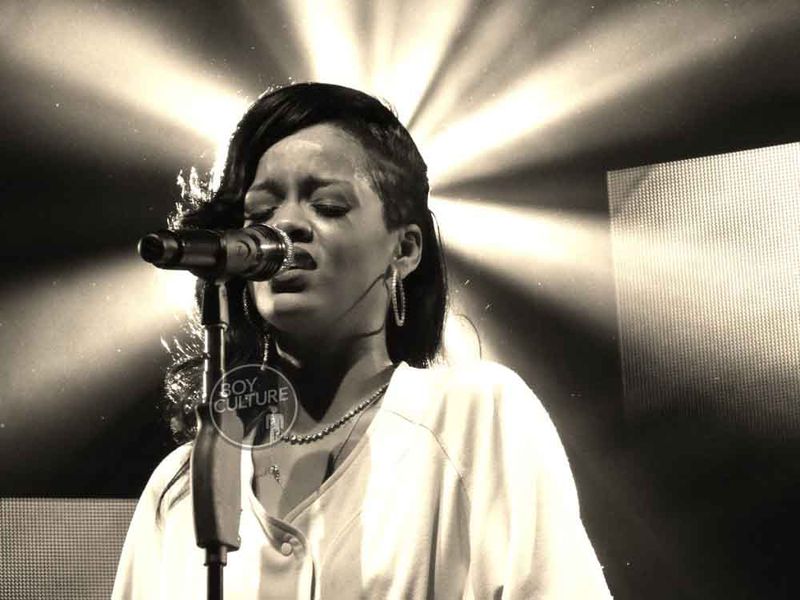 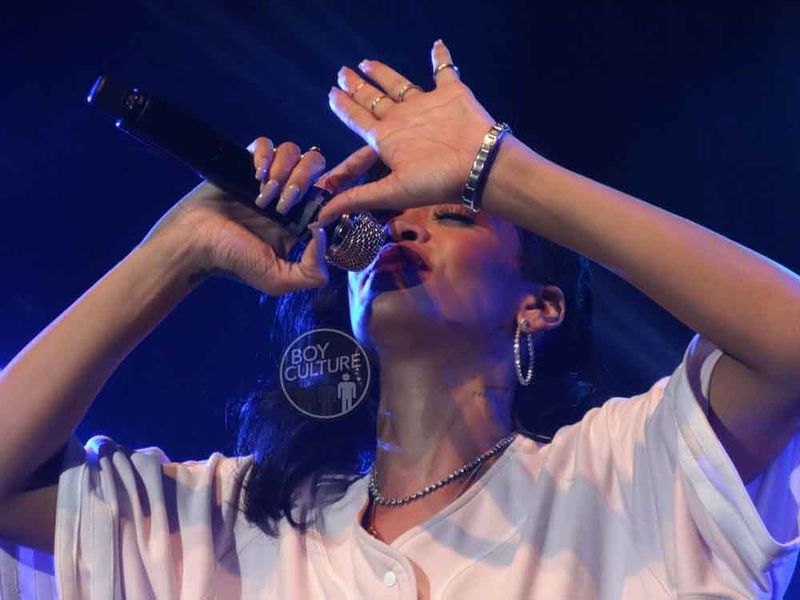 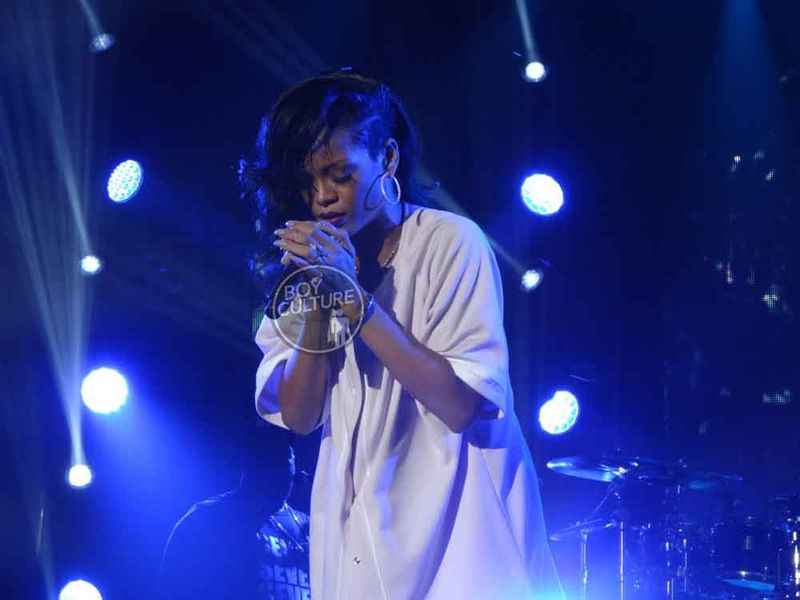 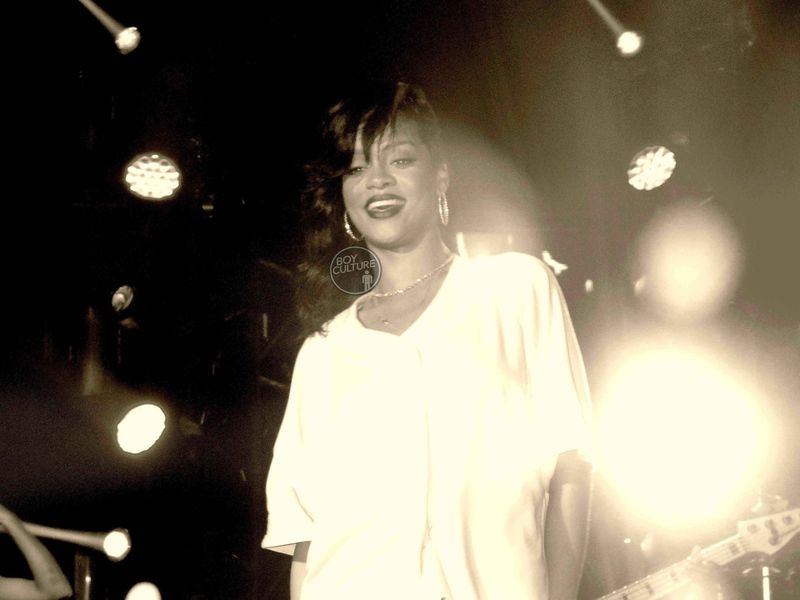 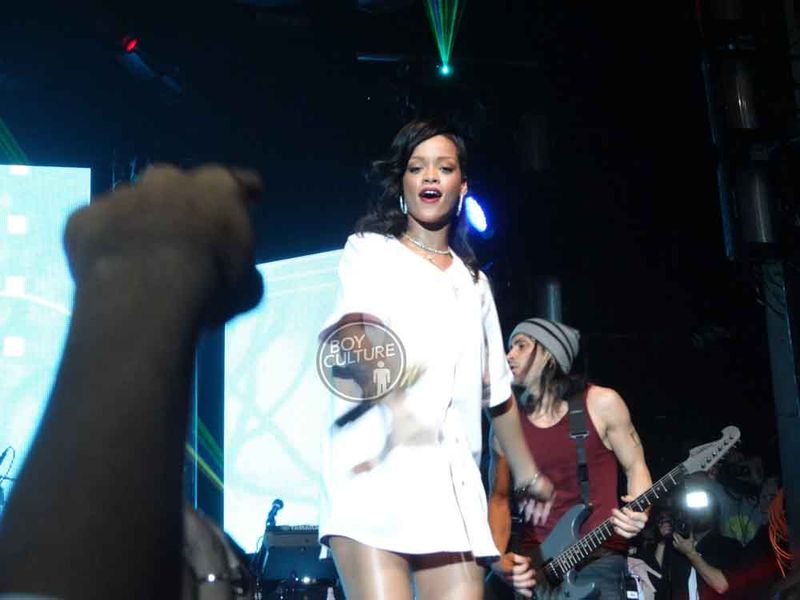 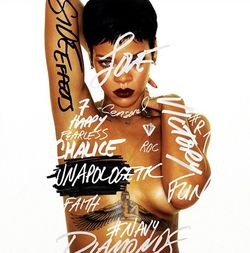 at Webster Hall; I haven't exactly written of my undying affection for the Barbadian bad girl.

But while I haven't been able to relate to her reaction to her Chris Brown beat-down, I have to admit she has a string of hit songs, many of which feel like indelible classics. Is it really so hard to imagine people listening to and loving "Only Girl (In the World)", "Don't Stop the Music", "We Found Love" or "Umbrella" decades from now? Speaking of which, with her new single "Diamonds" hitting #1, she ties Madonna and The Supremes with 12 pole-positioners, putting her behind only Michael Jackson, Mariah Carey and The Beatles for most #1 hits. And she's only 24...the same age Madonna was when she released her very first single. (Yes, yes, I know—Rihanna has had guests, Rihanna has benefited from iTunes. But it's still fucking impressive.

The gimmick of Rihanna's (tumultuous!) 777 is that the surprise gigs are free and first-come-first-served. She was traveling with press and superfans to complete 7 gigs in 7 countries in 7 days. With New York the last stop, I felt lucky to be invited so showed up at 7:30. Doors were at 7, my contact told me she was expected at 9. Famous last words. 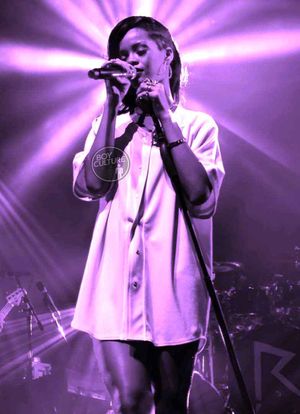 Inside, I was three to four people back from the stage. The gatekeepers made sure that the venue was only about 1/4 full until 9...people seemed to be trickling in. As soon as I found my spot, a brassy twentysomething girl, hanging on her hot boyfriend, asked me to take their picture, which I happily did. Much to my dismay, she became my arch-nemesis, pushing hard against me as she danced wildly to the endless warm-up music, hours before Rihanna graced us with her presence. Finally, she asked if I could move over slightly. I did so. She took up that space and continued. I was at a loss...we really weren't even packed in yet.

Worse, the short black girl in front of me turned to me a bit later and asked me to back up because I was touching her butt. I was nonplussed. "You think I'm touching your butt?" "Yes." I replied the only way I knew how: "You're safe with me. I don't like girls. [Perhaps a too-honest admission of the latent misogyny I feel during most G.A. concerts!—Ed.] I assure you I'm not touching you."

I backed up a bit, giving her the most amount of space of any person around us. To make things worse, she'd removed her shoes and was standing on her bag. It's a shame that my chewed gum found its way onto her bag somehow. 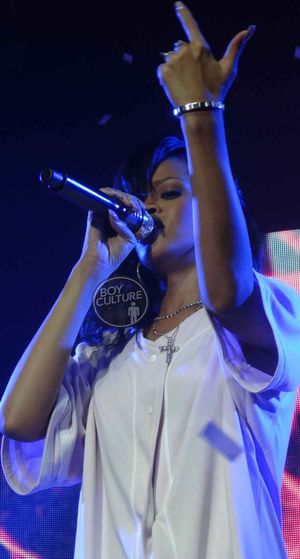 As we became more and more crowded (it was still never anything like my most panicked moment at a G.A. gig, which was when Madonna showed up to dance around at the Roxy during the Confessions era), I have to say the minority whities really shamed our race. One Aryan stud with a VIP pass around his neck kept muscling his way horizontally through the crowd even though he could just as easily have gone around—he did this multiple times.

But the worst was this crazy-eyed dude with a female friend who looked like she might fit in your pocket. He'd been next to me when I first arrived and they'd argued about whether to stay or go to the balcony before leaving. Hours later, he aggressively shoved their way to two people behind me, all but assaulting a tall black girl who was not having it and held his neck threateningly while demanding he get back. He kept it up, grinning and claiming he wouldn't move.

As things got tense, a moment of levity came when he told the black girl—who was statuesque—that she and her equally tall friends needed to let his companion stand in front of them because she was so short. "That's not how it works," I blurted out. Not that anyone listened to me—I was completely shunned by the people around me because I was a old random. He kept up the shoving and his enemy finally got security's attention and had him removed with the help of everyone in the vicinity. When the enormous white bouncer appeared nearby, the obnoxious guy hesitated and found himself being snatched nearly out of his shoes. Never seen anything like it. It wasn't human...but so deserved.

Anyway, everyone pretty much settled down and I had to admit the most annoying people had, so far, been evenly divided among the sexes.

Rihanna didn't come out forever. Madonna is known to be very late on her current tour, but I would rather stand in Madonna's comfy triangle or sit in an arena seat waiting for her than stand sweating in a teeny venue waiting for Rihanna any day.

At 10:56PM (the hot Italian goomba had just grumbled, "Now I get why Chris Brown hit her!" as the black girls around him laughed and gave him mildly scolding "oh, no he didn't!" looks), Rihanna emerged, a vision in white. Her top and shorts—if not her platform sneaks—reminded me of Risky Business, something we know she enjoys.

I couldn't tell you her set list with any accuracy, but she seemed to cover her ultimate hits even if many were clearly abbreviated (she was on stage about 80 minutes). What struck me about her as a performer was that she seemed more elemental to me than performers like Gaga or Katy Perry or Madonna—she looked like hearing her songs filled her with joy and that led to her dancing and luxuriating  in the sounds in a very unchoreographed but very authentic way.

I was also thinking, as I listened to her "sing" her hits (it was heavily tracked), that a huge part of her appeal has to be that she seems to be speaking in ways that her female fans speak or would like to speak about love, relationships and sex. They all want to feel like "the only girl in the world," so it makes sense Rihanna is "the girl" of her era. 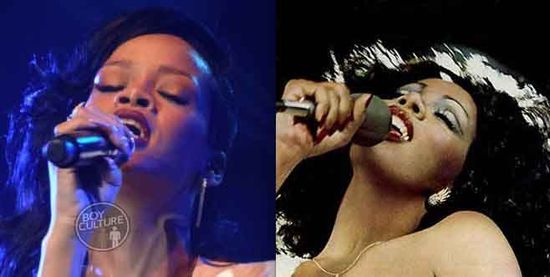 We found love to love you, baby...

The other thing I noticed is a strong resemblance to early Donna Summer. Maybe it was the angle. But her emoting during her ballads was convincingly intense, especially when singing about cheaters.

Anyway, I had plenty of fun once she hit the stage (and things were not as pushy-shovy...hey, everyone has to be still to take pictures!) and the audience warmed up to the old creeper, too; I heard a girl behind me murmur, "I want your camera." And a sexy guy next to me in a BOY of London knock-off cap sweetly asked if I would be posting my photos on a blog. When I told him where to find me, he asked, "And you won't watermark them, will ya?" I felt like saying, "Naw, and here's 20 bucks, too!" I'm not attacking him—he's a fan—but it's funny how over time fans have been trained to expect everything not only for free but on their own terms. I've had people ask me to e-mail them my hi-res photos at concerts, too. I hope he finds my photo gallery and hope he likes-it-likes-it-come-on in spite of the watermarks.

Rihanna's Unapologetic is out now.