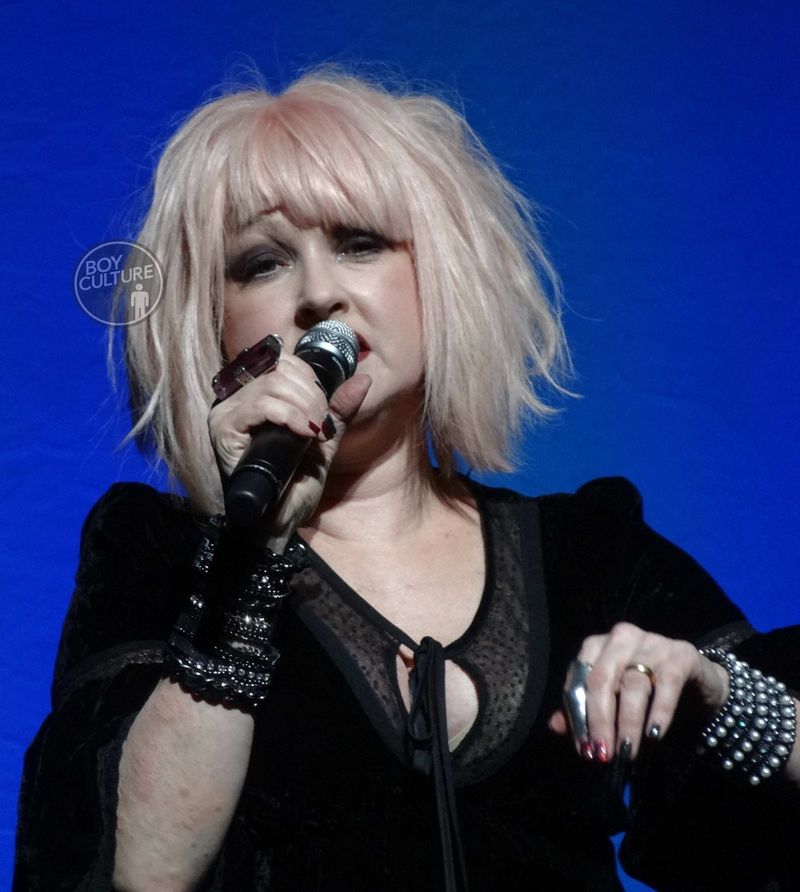 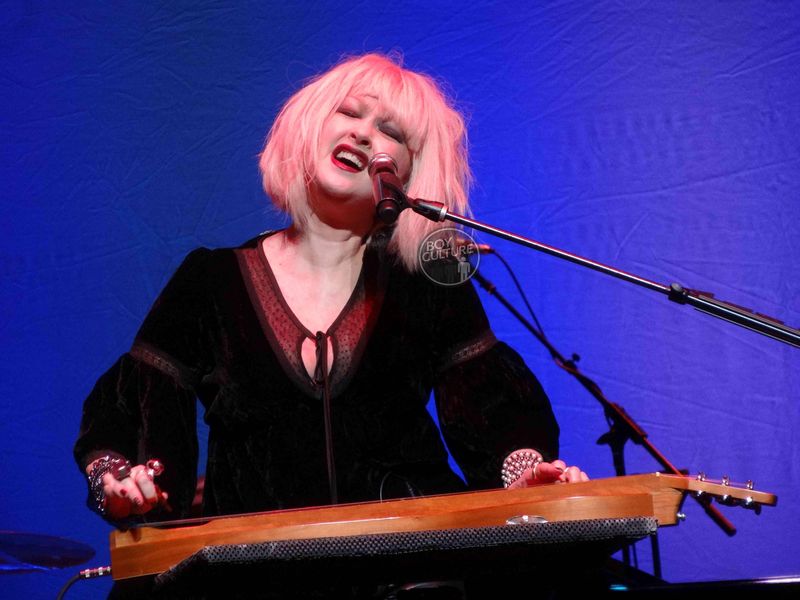 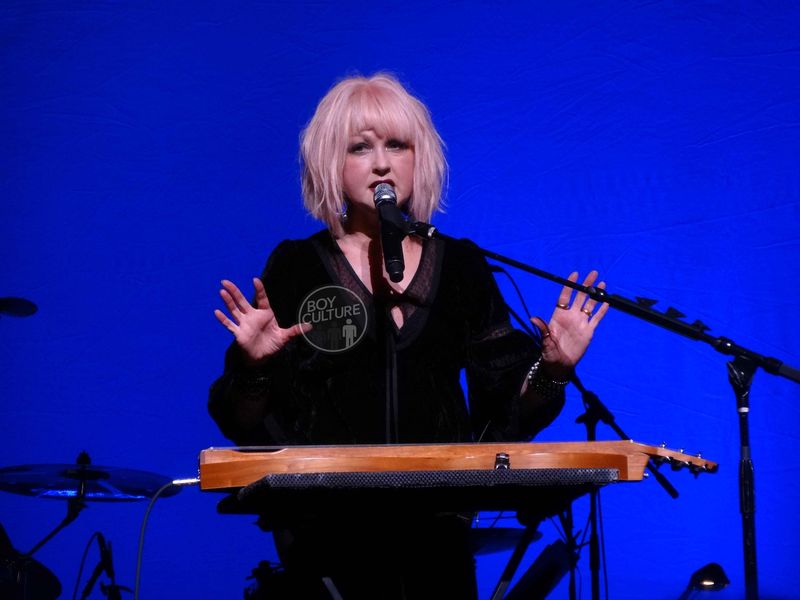 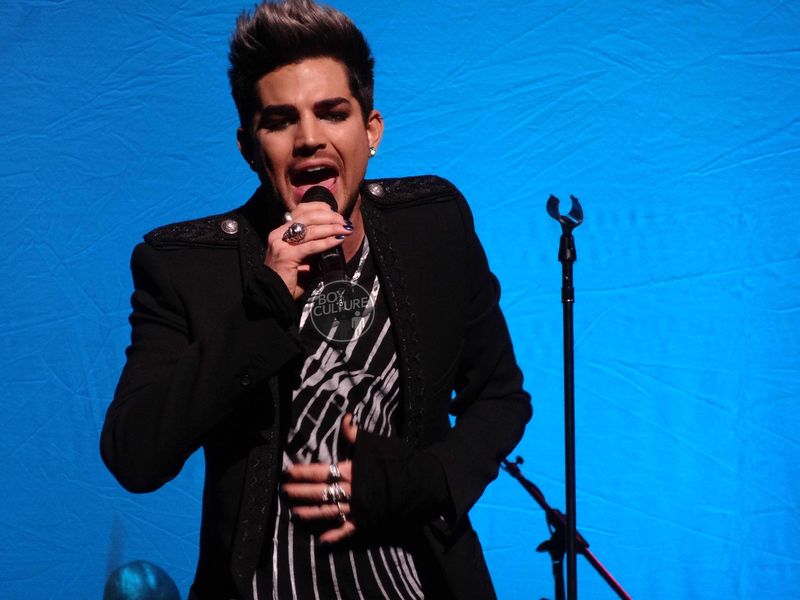 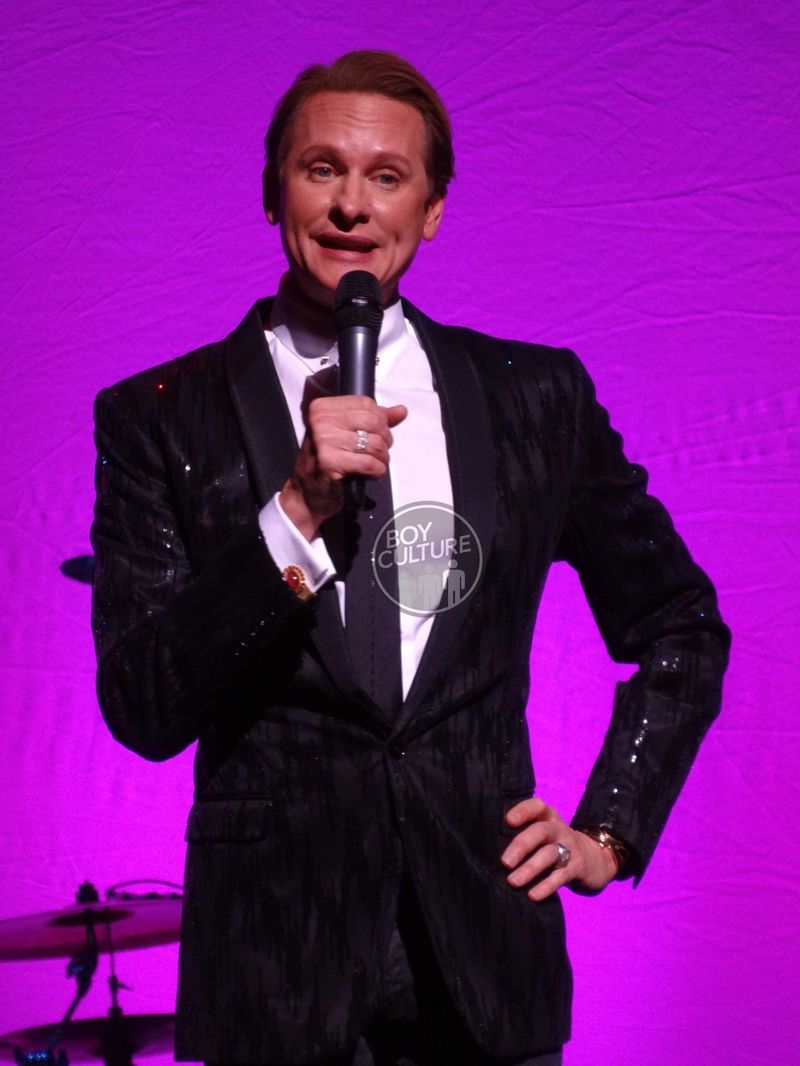 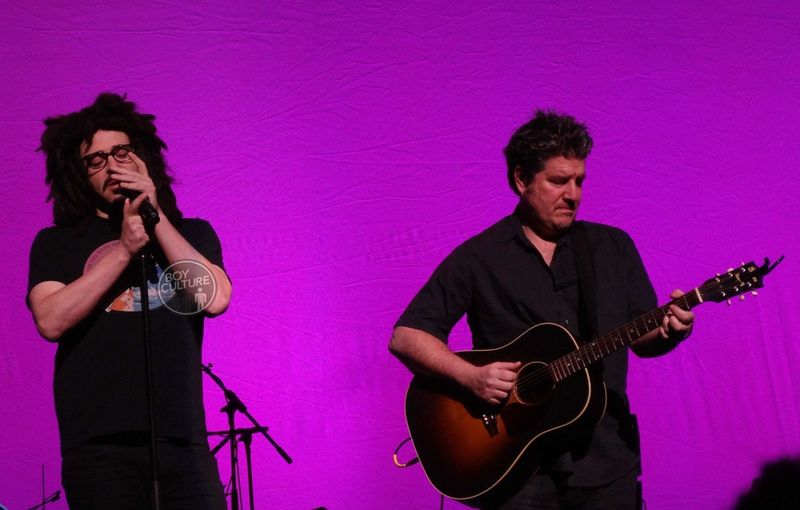 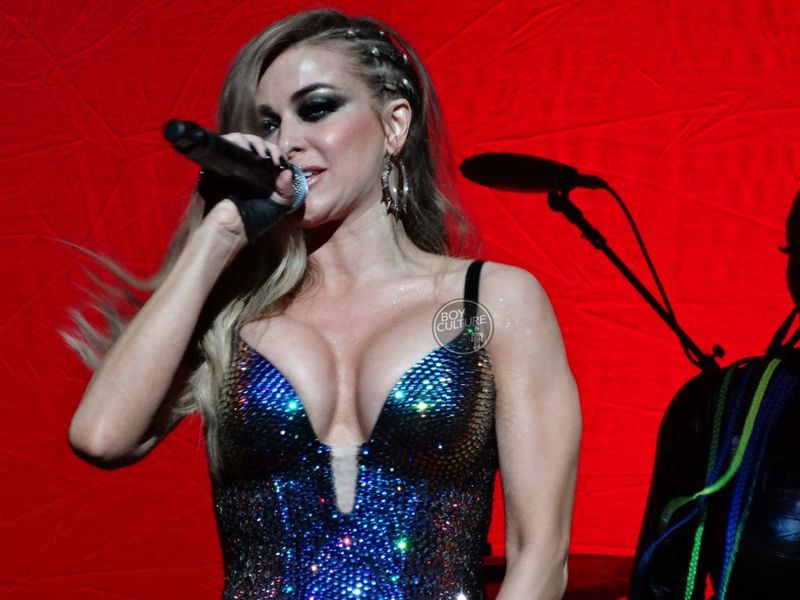 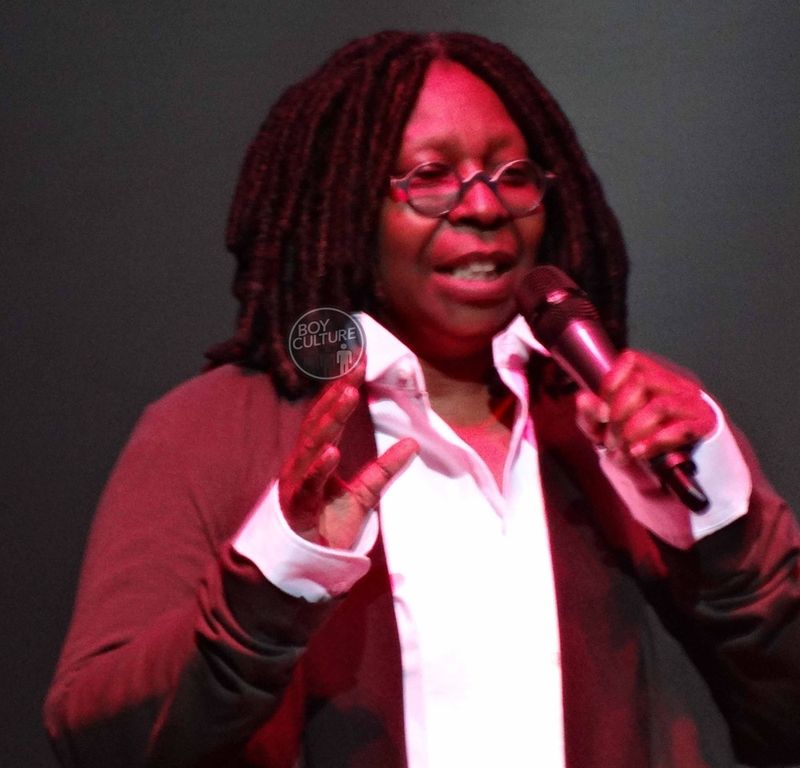 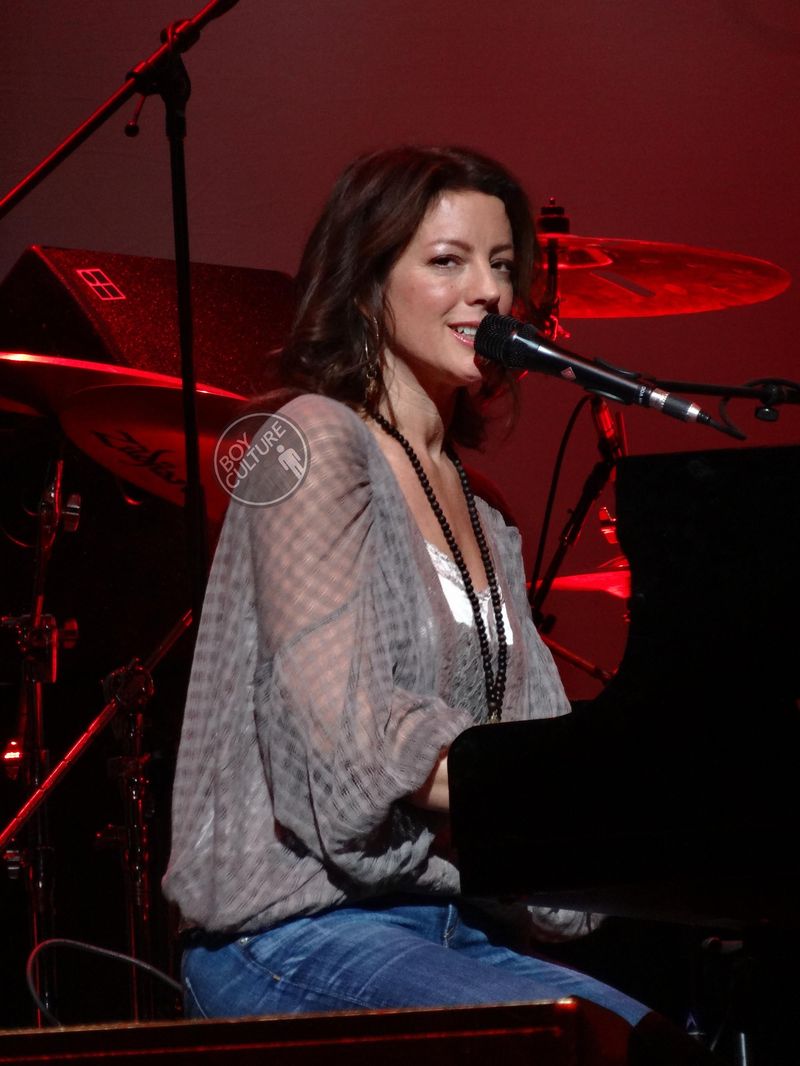 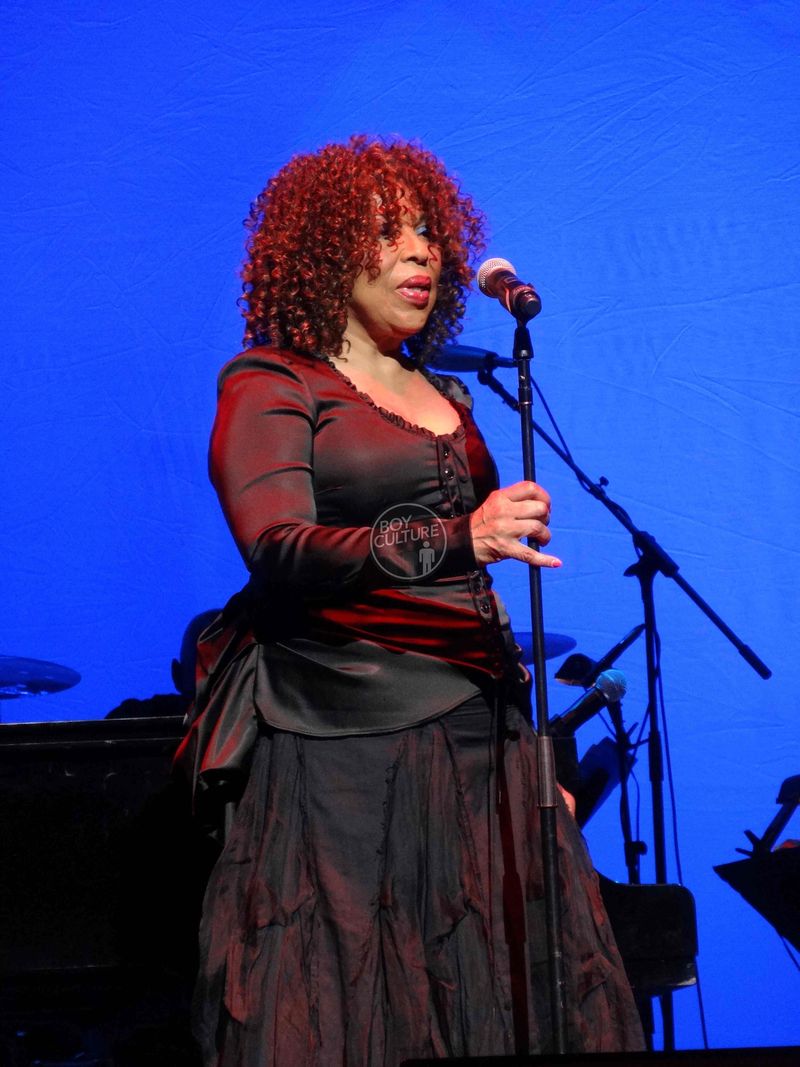 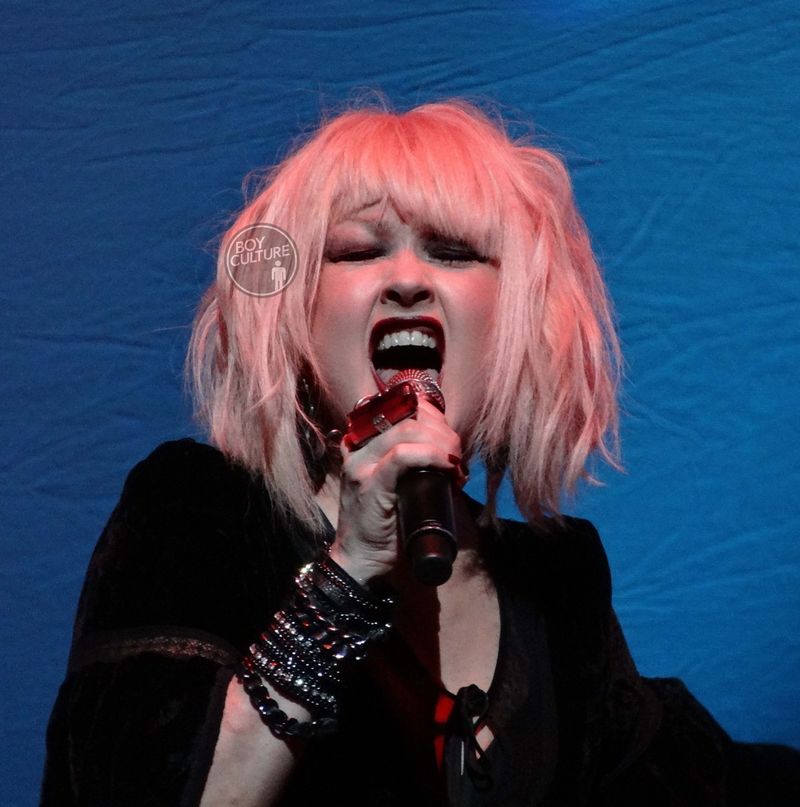 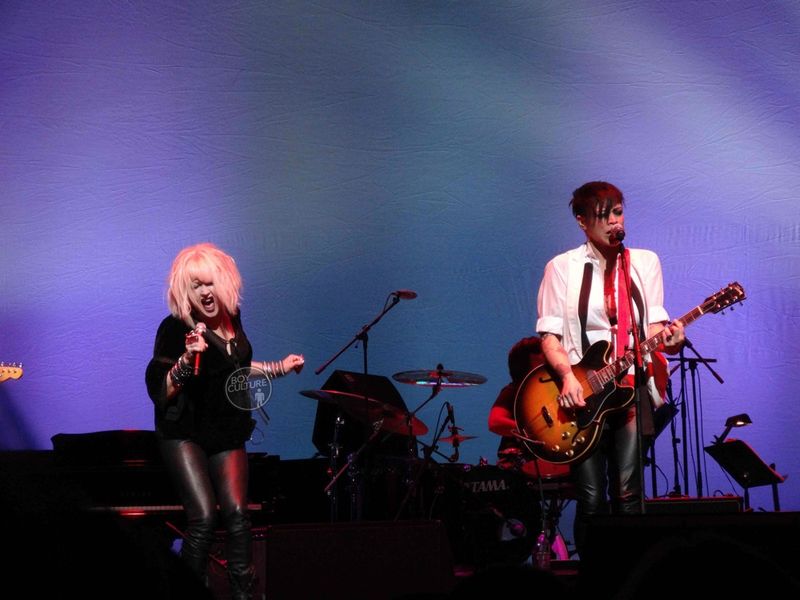 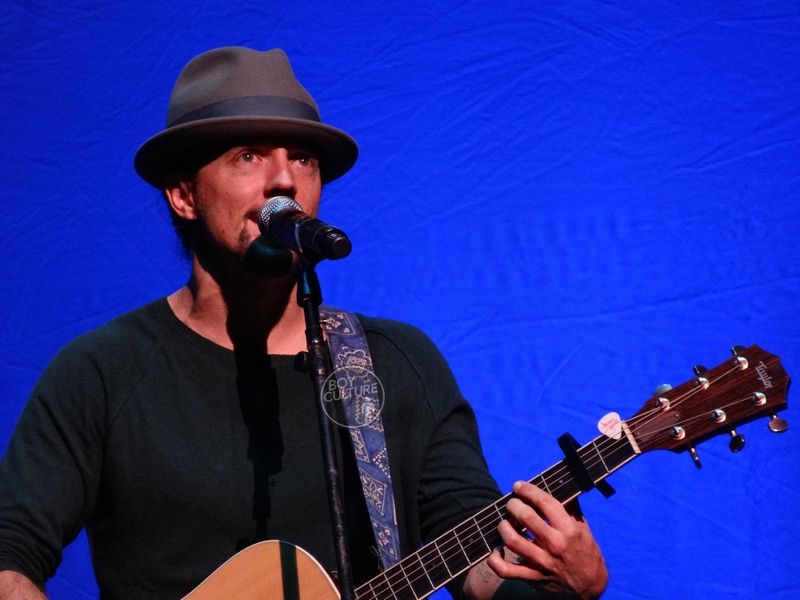 Above, a gallery of the night's pro-gay glitterati 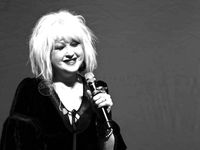 Last night was Home for the Holidays, what's becoming an annual event hosted by Cyndi Lauper ("& Friends") to raise money for her True Colors Fund, which benefits homeless LGBT youth. While the night also offered Lauper ample opportunity to remind us of her beloved music catalogue, her upcoming Broadway show Kinky Boots and WE reality series Still So Unusual (even her underrated 1988 movie Vibes got a shout-out!), there's no questioning that her heart's in the right place, nor would you get very far if you attempted to convince anyone her charm or vocal skills are on any kind of decline. 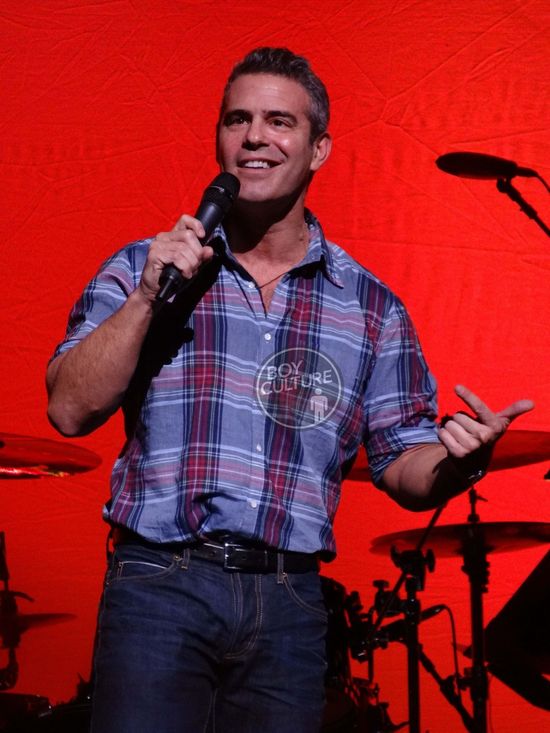 Together, we watched what happened—live 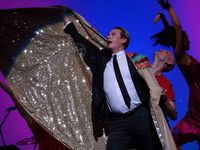 The show started right on time and spanned three hours, including brief appearances by Whoopi Goldberg (a bit discombobulated), Andy Cohen (studly in plaid and denim) and Carson Kressley (game for anything, including jokes about Grindr that Cohen could be seen having to lean over and explain to Rosie O'Donnell), not to mention a pretty hysterical stand-up spot by Rosie.

O'Donnell joked that she would trade in her teens for three colicky babies then quickly demanded we erase that if we'd been videoing. Interestingly enough, I wasn't videoing that part, but was getting short snippets elsewhere. An overattentive security guy in our area (close floor seats—thanks, Greg!) kept glaring at me so I missed some good stuff. But I didn't stop entirely. Hey, I'm getting the word out! 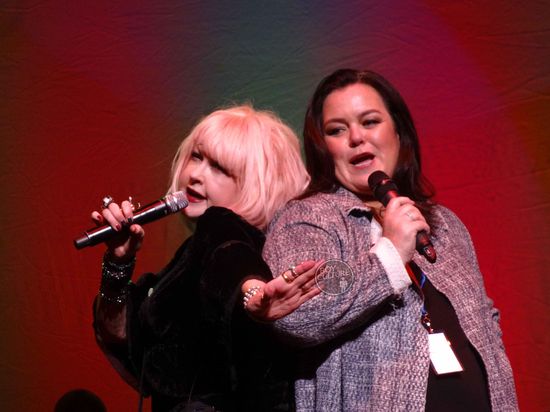 Rosie was especially funny when discussing the trouble her big mouth has gotten her into, whether it 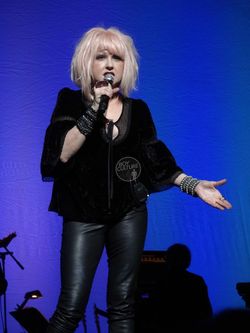 be with Donald Trump (she rightfully gloated that she had been ahead of the curve in her identification of Trump as a total douche) or Meryl Streep (Rosie joked, at Lois Smith's funeral, about the strange lisp she thinks Claire Danes has on Homeland this season, only to have Streep take the stage after her and chastise her, calling Danes a brilliant actress and the lisp an obvious acting choice). But she really had me laughing when she joked about her recent heart attack, saying she'd always expected a true heart attack would feel like being "punched in the tit by Mike Tyson" and later clutching her chest and going, "Ooh—ooh! No, I'm all right." She has a real Redd Foxx opportunity before her.

Musically, it was a wildly diverse group.

Sarah McLachlan was first, singing two songs (including "Angel"), and Jason Mraz was the "very surprise guest," doing a similarly earthy set. I did pause to wonder if he enjoys the smell of his own farts a bit too much after he asked for the wedges to be turned down in his ears because, "I like to hear what the people hear." Great of him to be there, though.

I wasn't as wowed by the relative unknowns/newcomers, though rock outfit Hunter Valentine pretty much nailed it, both on their own and in a feisty duet with Cyndi. Many of the performers did duets with her, including McLachlan on "Time After Time" and a thrilling "When You Were Mine" featuring Cyndi's lower register and otherwise uninteresting (to me) St. Vincent providing a lovely, airy, upper-register counterpart.

I will say that Alexis Krauss of Sleigh Bells (had never heard of either) was confident alongside Cyndi, no mean feat. 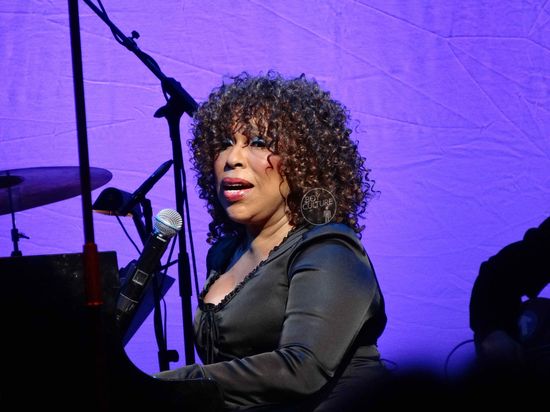 Due to the lighting and her curls, this was the first time ever I saw Roberta's face

The legendary Roberta Flack—doing a couple of songs of her own (but not that one) that included "Hey Jude" simply had no energy. She's doing the minimalist thing, but I think she aimed a notch too low. I like the whole Peggy Lee "let's suggest a performance" approach, but at some point it becomes too similar to experimental performance art where you watch someone sleep. (She also claimed it was George Harrison who said all his life to, "Give peace a chance." But that was cute.)

Two songs from Kinky Boots didn't make me eager to see it, but Cyndi sure sold hers and the show's star, Billy Porter, received a huge reaction from the audience. I do think perhaps Cyndi should be told not to publicly predict a Tony for the star of her own show...awards voters had that sort of hubris, even though in her case it came off as selfless and admiring. 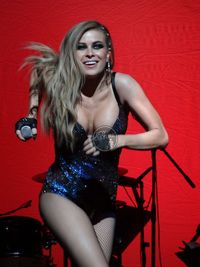 While I'm less inclined to dig the singer/songwriter thing, it was obvious all the artists were genuine musicians (some Counting Crows flew in) and quite dedicated to their craft—and more than capable of singing live, or even improvising. Even Rosie O'Donnell, not known as the voice of her generation, did a hilarious "Santa Baby" duet with Cyndi that killed. All the more reason how jarring it was to have Carmen Electra—introduced by a Real L Word actress—prancing around, lip-synching her new single "I Like It Loud". It was embarrassing enough to have her follow Jason Fuckin' Mraz, but then when her track—including the vocal, of course—dipped at one point, threatening to cut out, I almost joined Rosie in the "heart incident" club. 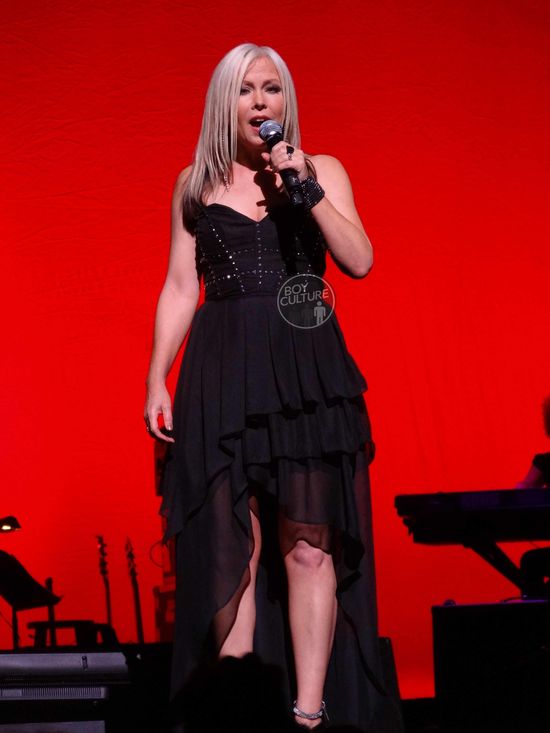 She took our breath away

What really took my breath away was the surprise (to me) of glamorous Teri Nunn of Berlin, who emerged in a black gown looking kinda like a younger Terry Moore, every inch a grown-up diva. She looked stunning and sang powerfully a rendition of her group's biggest (but not best!) hit song, "Take My Breath Away". I suppose it was too much to ask for the Donna Summery "Sex (I'm a...)" and/or "The Metro" and/or "No More Words", but let's just say I held out hope and yet was satisfied even though the closest I got was a Christmas duet between her and Cyndi. 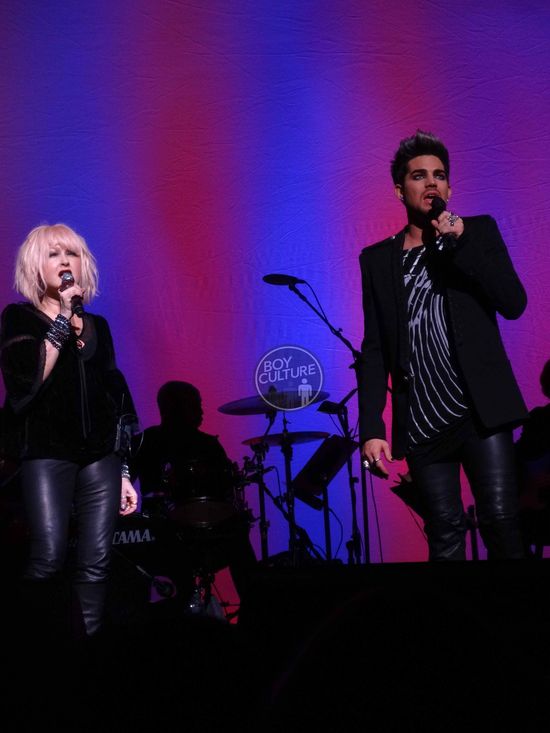 Cyndi with a neo-"Boy Blue" 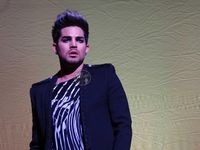 But the biggest commotion belonged to Adam Lambert, who went last among the "friends" and who behaved very humbly during his "Mad World" duet with Cyndi and while performing his "Whataya Want From Me?" It was nice to end the guest spots with another successful openly gay artist, and one who has chops as well as being familar with upbeat pop music. 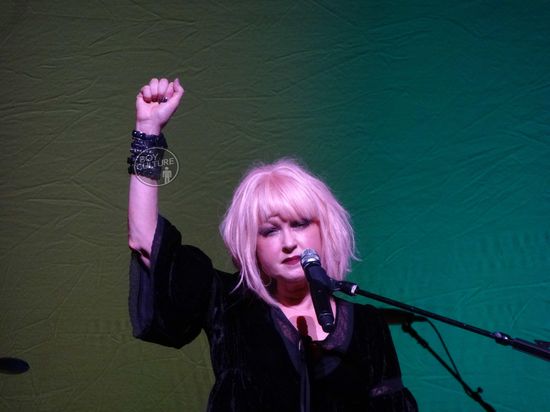 Some of the crowd might've missed her Thelma Ritter reference, but not "People Have the Power"

Cyndi of course closed the show with not only a bang but a series of them, most interestingly feisty versions of "Money Changes Everything" and an all-star version of "Girls Just Want to Have Fun". Still a trouper 30 years after her first big impact and looking great (minus the weird hives Rosie mentioned Cyndi's been suffering from—hope she's okay!), Cyndi Lauper has been able to continue her career and continue expanding her art while at the same time becoming an effective advocate for an important cause. In the end, this girl knows how to have fun, but that's not really all she wants to do.