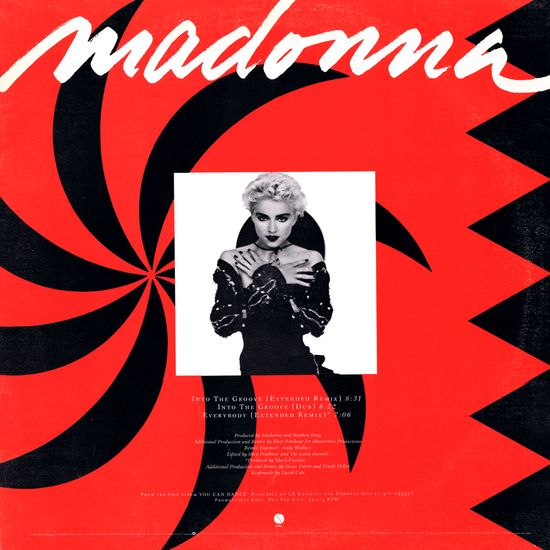 Many times over, I've proved my love to her...

UPDATED GRAF: Added some missing songs, tweaked a couple of rankings that I think were inspired by list fatigue.

I haven't done such an elaborate Madonna list since completing Encyclopedia Madonnica in 1994, but I wanted to do a sort of ultimate, ranked list of all of Madonna's 221 officially released songs.

I think I have them all, but I am very open to receiving your corrections and input. 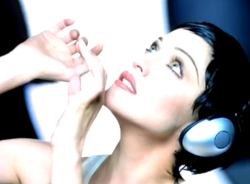 Musical performances in films are included (such as "I Surrender Dear"), but not if they are less a song than an acting performance set to music (the Blue in the Face singing telegram). 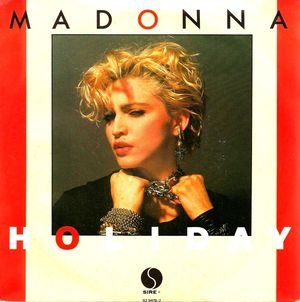 Where it got tricky: I'm including Wonderland's theme because it was a studio-recorded song released for consumption on television. I did not include spoken-word recordings, unless they were set to music. I'm including the songs from Pre-Madonna as they were commercially available, albeit not through Madonna. I am not including any of the Otto von Wernherr, um, "songs" or "If Madonna Calls", as those all seemed to songs created as afterthoughts by others.

UPDATED GRAF: I can see the point of questioning "The Beast Within"—which is called a remix of "Justify My Love" in its original form—but I think it is incredibly, significantly different, with different lyrics and a whole different feel (if the same sound). Madonna performed it as "The Beast Within" on tour, not as "Justify My Love (The Beast Within Mix)." I have to count "Did You Do It?" as a Madonna track; it was included as a unique song on Erotica, has a unique title and has a lengthy rap that was added. Her contribution is minimal, true, but I think its existence as a bona fide track on one of her studio albums argues in its favor as a stand-alone (or fall-flat-alone). I think the most interesting question is if "Up Down Suite" is really different from "Goodbye to Innocence." I really think it is. "Erotica" and "Erotic" are essentially the same song, tweaked, and "You Thrill Me," while sounding quite unique, fits right in there. But let me know what you think. And yes, I think "Up Down Suite" is way better than "Goodbye to Innocence," if only because in the latter, Madonna embarrassingly mispronounces "anonymity."

When it came to duets, no question. When it came to songs that featured Madonna, it really depended for me on just how prominent her contribution was. I don't feel she's a strong presence on "Sing" by Annie Lennox, I didn't think her backing vocal on Peter Cetera's "Scheherazade" was enough to warrant inclusion, and yet it would seem ridiculous not to include "Queen's English" by José & Luis, which is all but constructed around her vocal.

I look forward to your comments on what I included and didn't include, and of course your reactions to my ranking. To each his own, but in general I factored in how much I love a song personally, how important it is in her oeuvre, how interesting it is (including music and lyrics) and also how unique it was at the time of its release.

Ultimately, it's going to be about my favorites vs. yours!

Feel free to cut-and-paste my list and submit your own. 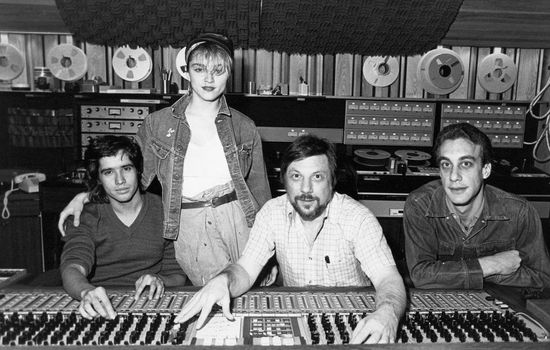 The quintessential pop single of the 1980s, "Into the Groove" was only released in the U.S. on a 12" single, as the flip side of the less perfect but still divine "Angel." To this day, it perfectly sums up early Madonna: It has a suggestive vocal delivery, an aching excitement that translates well to the club and was culled from Desperately Seeking Susan (1985), which along with Evita (1996) is one of her only 100% effective film appearances. The lyric "At night, I lock the door/Where no one else can see" was a clarion call to female and male wannabes alike—it remains a dance manifesto.

Initially considered for the B-side treatment (opposite "Keep It Together"), "Vogue" is a song Madonna had to be convinced was worthy for better. When it was released in 1990, it powered her risky set of torch songs and '30s pastiches I'm Breathless (still just what the dentist ordered for your aural sweet tooth) into multi-platinum status and established a pop-cultural craze. It still commands an orgiastic reception in concert and, I'm told, at straight weddings.

Though Madonna had earlier been praised as something of a perfect pop princess and had enjoyed some critical props for her mature vocals on songs like "Crazy for  You" (1985) and "Live to Tell" (1986), "Like a Prayer" was Madonna's first Joni Mitchell moment; upon its release, she was rapidly reassessed and seemed to cross, overnight, from being a musical superstar into being one of the greats, worthy for discussion in the same breath as Elvis, Michael Jackson, Prince, Bruce Springsteen and...well, anyone you can think of. The fact that it is forever tied to The Cosby Show and Pepsi can't shake the iconic, transformative powers; there's a reason Madonna trots this one out every chance she gets. A revelation.

Having been returned to critical good graces with the pretty-good Bedtime Stories (1994) and the pretty great Evita (1996), Madonna was primed for a musical re-invention at a time before the term had become a cliché. She did not disappoint, mananging to merge electronica with pure poetry on what is arguably her greatest album, Ray of Light (1998). The album is filled with songs that one would be hard-pressed to associate with anything Madonna had previously released, many of which feel as coolly, effortlessly poetic today as they did 15 (!) years ago. None is more hypnotic than the album's lead single, a mesmerizing world-music work that expanded on the depth of 1989's Like a Prayer exponentially. Madonna went from soulful to spiritual with this perfectly produced personal statement. The fact that it only went to #2 on the charts is an indication of all the #2 one can find even quite high on the charts at any given moment throughout the modern rock era. (She was denied #1 by KC & Jo-Jo.)

As much a religious experience as "Like a Prayer," its predecessor on the charts/neighbor on the Like a Prayer album, "Express Yourself"'s title neatly sums up Madonna's mantra more than any other song, and that includes contenders like, "I'm not your bitch/Don't hang your shit on me" and, "Unlike the others, I'll do anything/I'm not the same/I have no shame." There is absolutely nothing more central to Madonna's essence than the commandment to be true to yourself at any cost, nor has she committed a more feminist statement to record. More than its meaning, even, "Express Yourself" is one of Madonna's most infectious fist-pumpers. And how many hits would blogs the world over be lacking had Lady Gaga not based "Born This Way" on this track, purposefully or not?

Madonna's very first single, "Everybody" might have been beaten out by a slew of songs we now possess in demo form, none of which comes close to the universality of this slyly cool dance-floor shuffler. That early Madonna vocal is indelible and was easy for her to sing live at the time, as evidenced by its debut at Danceteria over 30 years ago. The song provided a firm foundation in dance music from on Madonna has relentlessly built and built, through musical phases as diverse as a stack of vintage Sam Goody genre dividers. A precursor to "Express Yourself," and a promise she's never broken yet.

Madonna's first Top 40 hit came before the public had a solid visual on an artist who would become one of the world's most visual musicians of all. At the time, many thought her black, which may have informed this plea for worldwide unity that peaked at #16 on Billboard. It's about getting away, but is infused with too much a sense of mission to be called "escapist." Madonna's tendency toward blissful simplicity was still considered a virtue when "Holiday" was released, so it is often cited as among the best of her best. An early anthem.

In 1985, Madonna was the enfant terrible of pop, a too-racy, too-confident, is-she-going-too-far? kind of girl who toured the country, snagged every magazine cover, earned bad-boy actor Sean Penn's betrothal and brattily hosted Saturday Night Live. Little wonder, then, that her appearance in the video for this song, originally associated with her husband's movie At Close Range (1986), marked the first time the press was shocked by a Madonna transformation. But as Madonna has often said, even while gaily pushing every button in sight, it's about the music first and always has been; in this case, "Live to Tell"'s lush vocal—reportedly recorded in one take—revealed so different a dimension as to win many critics to the side of a woman they'd only a few months early been deriding as a "Minnie Mouse" sound-alike.

Madonna has a tendency to indulge herself, which at times works well (I'm Breathless), and at times repels even her die-hard fans (the polarizing "Gang Bang"). Here, on Madonna's boldest musical statement up to the time it was released, her cheek and her artistic daring combined to create a song that didn't sound particularly like anything else that had ever been on Top 40 radio. Sexually aggressive, vocally experimental (once she got a load of how she sounded doing vocal raps, she returned to it many times in ensuing years, but never close to as effectively) and simultaneously erotic and hilarious, "Justify My Love" represented a Madonna who had the world by the balls...and precipitated a Madonna who would soon discover that ultimate success can lead to resounding, if temporary, and nerve-rattling failure. Watching all those foreign films rubbed off here.

Madonna's first MTV video was achieved thanks to this brassy, delightfully tacky pop-rocker, in which she cooed like a sexualized nymphet, but in a song that's all about not sexuality but hot-and-bothered ambition. This should have been a smash hit. As a work of art, or just as a straight-up pop song, it's an unqualified success. 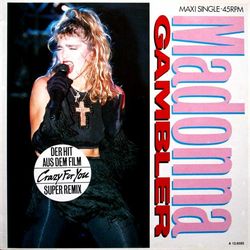 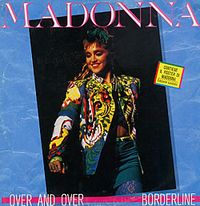 #43 "Beautiful Stranger" (1999) Austin Powers: The Spy Who Shagged Me Soundtrack by Various

#45 "I Want You" with Massive Attack (1995) Inner City Blues: The Music of Marvin Gaye by Various

#48 "I'd Be Surprisingly Good for You" (1996) Evita: The Complete Motion Picture Music Soundtrack 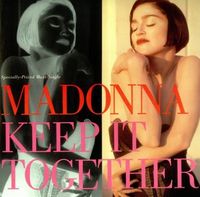 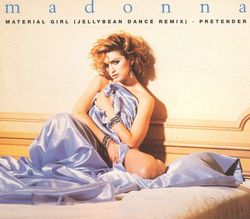 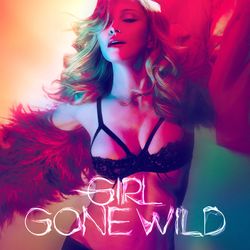 #86 "Another Suitcase in Another Hall" (1996) Evita: The Complete Motion Picture Music Soundtrack 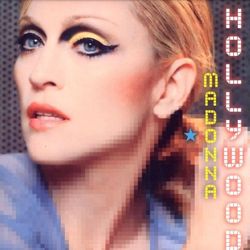 #98 "You Must Love Me" (1996) Evita: The Complete Motion Picture Music Soundtrack 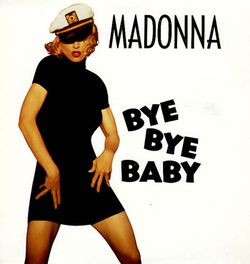 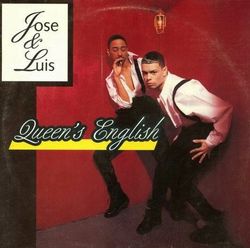 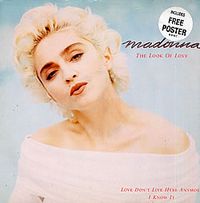 #135 "Guilty By Association" with Joe Henry (1996) Sweet Relief II: Gravity of the Situation—The Songs of Vic Chesnutt by Various

#147 "What Can You Lose" with Mandy Patinkin ( 1990) I'm Breathless: Music from and Inspired by the Film Dick Tracy 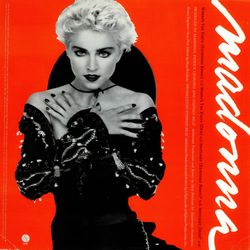 #170 "Something to Remember" (1990) I'm Breathless: Music from and Inspired by the Film Dick Tracy 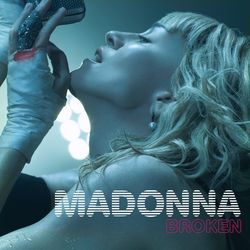 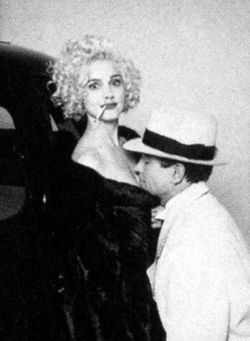 #188 "Now I'm Following You Part II" with Warren Beatty (1990) I'm Breathless: Music from and Inspired by the Film Dick Tracy

#190 "Now I'm Following You Part I" with Warren Beatty (1990) I'm Breathless: Music from and Inspired by the Film Dick Tracy 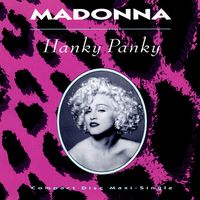