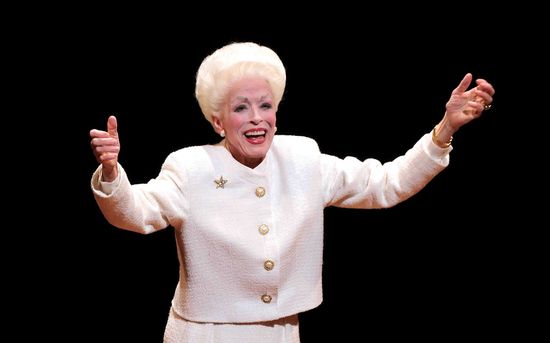 This Ann Richards is Taylor-made

Holland Taylor has worked steadily for years, first on the stage, sometimes in movies (Romancing the Stone) then on TV (Bosom Buddies and Two and a Half Men are her most famous roles in the medium). She's often played hoity-toity women just shy of "bitch" territory, her comic delivery making them more amusing than infuriating. She knows how to play a character while still allowing her own persona to shine through, one that urges the audience not to take things too seriously.

In Ann, the one-woman show (if you don't count taped offstage commentary by Julie White) she wrote for herself, Taylor gives herself over to the subject, the late, great Governor of Texas, Ann Richards, and it's a performance that is both a revelation and a suitable final act in her long career—not that she has any intention of slowing down. Judging by the legwork it took for her to research Richards and get Ann up, let alone on Broadway in the expansive Vivian Beaumont, it would appear Ms. Taylor is only working harder as the years go by, the sign of a true artist. Ann finds Richards, resplendent in a white suit and that trademark white updo ("Republican hair," they called it), giving one of the many lectures she was paid to give in the final years of her life. This portion of the first act allows Taylor to demonstrate how thoroughly she inhabits the character. We're talking the molecular level. At times, one easily forgets that it isn't Richards herself imparting wisdom via family stories and cracking wise (including one blue joke involving bestiality).

In truth, this portion of the show drags pretty quickly, but once Richards is transported into a cavernous set that recreates her gubernatorial offices, the show and Taylor's scrupulously reserached script crackle fully to life. Often seated, furiously scribbling her signature on stacks of documents, Richards fields phone calls about matters of state, national events (at one point, counseling President Clinton that Barbara Jordan was too ill to be named to the Supreme Court) and family minutiae, like who's bringing ham, who's bringing turkey and who's bringing pie to a get-together, and arbitrating a dispute over charades that threatens to split her brood apart.

By turns, Richards is ruthlessly competent, principled, funny, thoughtful and domineering. She reduces one fuck-up to tears then remembers to make arrangements for him to receive some boots in his size from a trip she's about to take, she barks at her beleagured secretary and rails aginst her speech writer, but seems to think of them as extensions of her family. She breathes ambition, but never seems to lose sight of the fact that she's in politics in order to improve the lives of other people, not for personal glory. 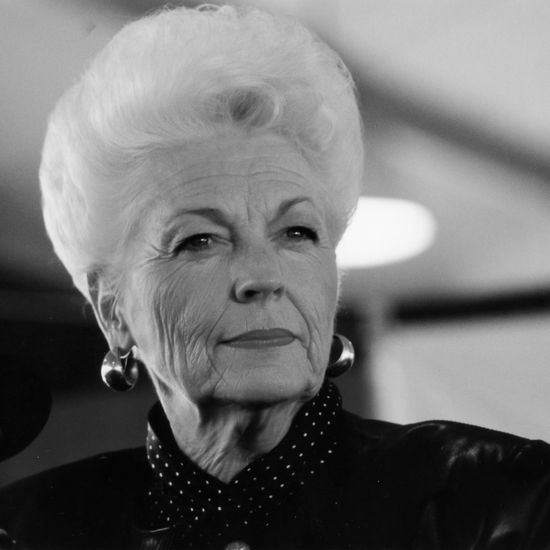 I would have liked the show to cover the whispering campaign that said Richards was a lesbian, which may have contributed to her losing the governorship to George W. Bush, "some jerk" who went on to cause the country lose its collective mind, but I suppose the play can't cover it all. And I was definitely not satisfied with the sound effects and music used, which were cheesy at best.

But we could use a woman like Ann Richards again, a woman unafraid to misbehave simply by having the kind of vision and drive only men are supposed to have and who is willing and able to subvert the status quo in meaningful ways. Bless Holland Taylor for bringing such a woman back to us, if only for a couple of hours. 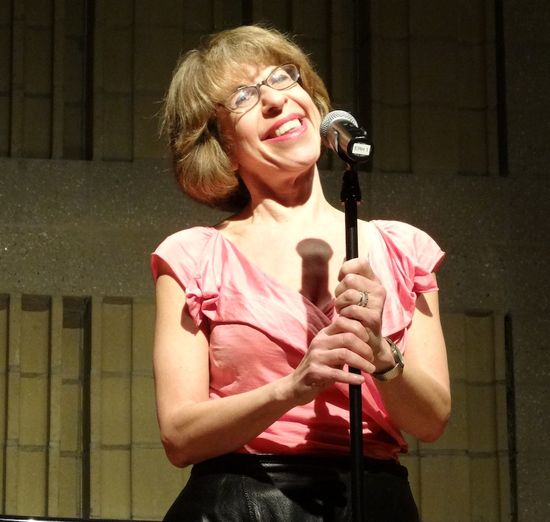 Scraping the Bottom at Baruch!

"Solo in the City: Jewish Women, Jewish Stars," Baruch; one night only.

If you don't know anything about Jackie Hoffman, learn. Fast. I first saw her in Suddenly This Summer, a parody of the Tennessee Williams play co-starring Varla Jean Merman, at Tweed in NYC something like 15 or 20 years ago. She was a riot then and is only getting funnier as time goes by, like your grandparents or the absurdity of life. 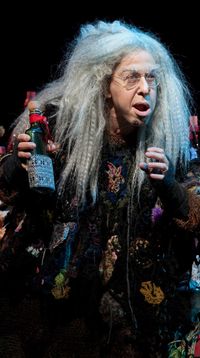 Since then, she's become the go-to girl for offbeat humor, enjoying a long run in The Addams Family. A regular paycheck for Hoffman may have been the only good thing about that show, that and the opportunity it provided for her to learn how to impersonate Bebe Neuwirth, which she can now do even better than Bebe Neuwirth. (Hoffman is pictured at left in the show. She played...older.)

Jackie's show last night at Baruch, which mixed original songs (with accompaniment by pianist/songwriter Bobby Peaco) with fall-down-laughing stand-up, was alternately aimed at her Jewish fans and her gay fans, so several gay Jews in the audience had to be taken out on stretchers. This may be why she says her life should not be associated with the word "journey" so much as with the word "gurney."

The treat about Hoffman's show is that she can wail (actually, she does that literally, and quite often) but is also hysterically funny. Topics that most would consider to be "inappropriate" are considered "bread and butter" to Hoffman, who is so classy only she can pull of a song with the lyric "uncircumcised and cheesy" (from "That's the Man") in an institution of higher learning without seeming gauche.

I was shocked by how down and dirty she gets. There is a horniness about her that stands in contrast to  her Jewish-girls jokes ("I wish my nipples were as senstitive as my gums"). Her self-deprecating references to her past poor romantic choices (comparing her accomplishments in life to those of a Jewish great like Golda Maier invariably leads to, "Jackie Hoffman, who persuaded Hispanic security guards to wear condoms!") are a hell of a lot funnier than the few genuine potshots she takes at herself, including a poorly received joke about not being pretty. (Her bangin' body and chic fashion sense probably helped to kill that, the one joke that didn't work all night. How's that for constructive criticism?)

Hoffman does balls-out tasteless like Peggy Lee did slow-burn sultriness."Mass Shooting" is a song that eagerly anticipates the next time scores of citizens are wiped out in a barrage of bullets, but she delivers it in a way that makes it clear the intent is not to offend, but to decry the offensiveness of America's lust affair with guns. She's also flawless doing milder schtick, like a take on "I'm Still Here" as it would be sung by a jaded, five-year-old Hollywood actor, an actor, she carefully notes, who would undoubtedly already have more movie credits by age five than Hoffman has at age 52. 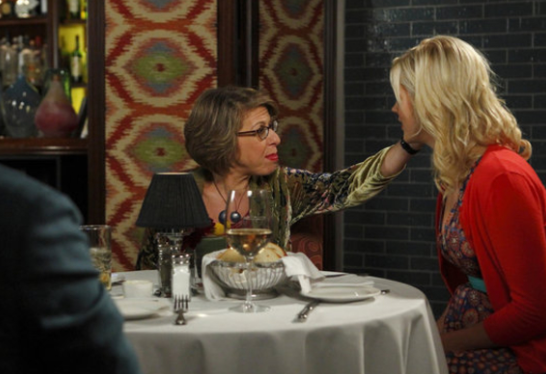 Hoffman is a real mother (-in-law) on The New Normal

But her humor works best when she's mock-bitterly complaining about her lot in life. She's done three guest spots on The New Normal, but went off on co-worker NeNe Leakes, who has a recurring role on the show. Very closely paraphrased:

"I may be a veteran of stage and theater and the screen, but who am I compared to NeNe Leakes, a woman who used to wrap her pussy around a pole for weed money?"

(I couldn't agree more. Leakes can't act, period. I bet the pole would be giving more convincing line readings on The New Normal.)

And if you're an old high school classmate of Hoffman's, don't you dare call her up and ask "when is the play?" once she's booked a gig in a Broadway musical. Just don't.

If you get a chance to see Jackie do a version of this or any other solo show, don't pass it up. She's brilliant in work by other people, but it turns out her greatest role is herself.

"Get to the Point"