I was astounded when, as a kid who spend every week at the local Sam Goody or Coconuts (don't judge) buying up 7" singles, I discovered what a 12" single was. Even then, I knew that 12" sounded 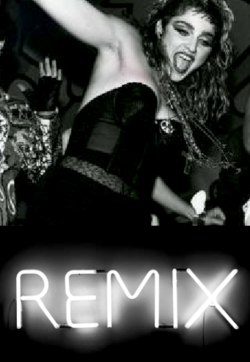 even better than 7", but who knew that most songs that saw lives as radio singles were also remixed and in some cases entirely reconfigured, and that the general public could buy them? It was like buying the same song over and over again, an ideal situation for an OCDiva like me.

The first one I ever bought was Debbie Harry's "In Love with Love," a song I maintain to this day should have been massive and would have if she hadn't already turned 40.

When it comes to Madonna, I have to admit I think most of her songs work better in their original forms. (And some never should have been remixed at all...remember those ear-slaying "Take a Bow" do-overs?) But that's not to say that the undisputed Queen of Dance Music hasn't been on the receiving end of some killer redos.

Check out my list, and remind me of the many, I'm sure, that I'm missing...

A simply gorgeous ballad is giving a swift kick in the ass with this expertly turbo-charged makeover, making it far more hard-driving and accusatory, not to mention easier to dance to.

Rauhofer's thumping remix of this charmingly awkward girl-with-a-guitar confessional is pure platinum. It's an amazing dance track, it maintains the original's vocal integrity and it knows all the right moments of the song to stretch out into oblivion.

"Music," like "Vogue" before it, has become a sort of wedding song...it's so huge it has lost some of its original coolness. But this mix by Victor Calderone forever preserves that kernel of forward-thinking, foot-tapping energy that the origianl had on impact, when it was ground-breaking and not just That One Song by Madonna About Making People Come Together.

Underrated, latter-day dance-floor catnip, "Girl Gone Wild" is actually vintage Madonna. Perhaps that's why it was unexciting for so many fans...it broke zero new ground. But as far as remixed go, you've got to love the buoyancy and air injected into the edgy confection by Nissim, who could remix a TV jingle and make it a #1 dance hit. The Middle Eastern flavor (also nothing new for Madonna) finds an unlikely and interesting home in this unapologetic booty-call anthem.

Dialled in to Madonna's club roots, the song received this roller-rink treatment that cotton candies the proceedings up considerably. A mostly hands-off remix, the chorus song's structure and choruses are largely untouched. Instead, Morales just amps up the fun, especially with those rolling, stuttering "Deep-deep-deep-deep-deep"s.

One of the most heavily re-invented remixes of Madonna's career, this trancey, aggressive version of what started out as one of Madonna's most vulnerable pop tunes, was married with a genuinely shocking, violent video. It's like an entirely different song, but an equally amazing one.

One of Madonna's most kick-ass songs, containing some of her most ecstatic vocals, is revealed as a long, achingly slow-to-build club stomper that sounds like a love siren. Consider its ability to invite us to the dance floor just this side of a subpoena.

Often, massive-hit songs can suffocate an artist's follow-up release, regardless of the latter's merits. This is because radio programmers are reluctant to let go of the long-legged sure thing and also because a flawless release can make the public uninterested in anything lesser. In the case of "Rescue Me," which forever lives under "Justify My Love"'s long shadow (even Madonna has ever, ever performed it outside the studio), the song is definitely worthy of a reassessment. It barely hit the Top 10 due to a bizarre, delayed-release strategy, but still contains one of Madonna's ballsiest vocals. These quirky "Houseboat" remixes (at one point, this one sounds like a sped-up precursor to "Secret Garden") first popped up on promo vinyl and were eventually commercially released overseas. Probably not a good idea to ask Lady Miss Kier if she likes this ditty. (Answer: She doesn't. She thinks Madonna ripped off Deee-lite's "Power of Love" with it.)

One of the last truly monumental remix-makeovers from Madonna is this bold take on "Give It 2 Me," a fluffy dance song. Oakenfold's treatment of Madonna's vocal and darker sounds make the song less little-girl greedy and more grown-up-dame demanding. This remix hasn't aged a bit.

One of Madonna's most recent undeniable classics got a sweeping treatment from Tracy Young, who transformed the song's poppiness into deep-club abandon. Nine-plus minutes of pure bliss.

This epic, 10-minute-plus remix has that adorable little dog-yip beginning and a pleasingly amped up bassline before cascading into a lush rendering of the single that sounds close to what an orchestra would do with it. This remix is painfully dated now, but at the time felt supersonic, bionic and uranium.

Madonna's "DCFMA" is a lovely, sweet-voiced take on a song about a steel-willed Argentinean that everyone had come to expect to be delivered with a Sicilian growl, but it's this flamboyantly kitschy, party-packed remix that became the single and a huge dance hit. As caramel corn is the nutrition, so this mix is to great music. But caramel corn beats fish-oil pills any day. It's still got nothing on Festival's Disco Evita...but what does?

Madonna's entrancing, trancy "Bedtime Story" was turned into an industrial prostate spanker by Vasquez, who gave the spiritual song a pulse and an infusion of warm blood. A remix that matches its very different source material.

This is a step down from the original, but considering the original is her greatest song, the remix is still pretty amazing. Madonna herself liked it so much she attempted to recreate the stuttering "c'mon" from the beginning in her live Who's That Girl Tour performances. Love the capturing of her intake of breath, and the chipmunk chorus's chant of, "Dance!" is cute, too.

Far superior to the detached-sounding original version on Erotica, the mix used in the video delivers a sumptuous, silky, seductive sound that neatly updates the Peggy Lee classic. In short, it lets Madonna be Madonna.

Incredible club thumber that amps up Madonna's shamefully underrated (maybe it was too deep for the room?) Ray of Light classic with an irresistible bassline and a suitably freaky echo to her pure, sweet vocal. The "Elaine Benes" meets Martha Graham dances make much more sense when the song is on acid, as it is under Club 69's control.

Madonna's easy-listening staple "I'll Remember" from the hard-to-watch With Honors got a deep remix by Orbit, which could be heard as spacey or as originating at the precipice of a vast ocean. (I'm thinking of Sinead O'Connor's "Jackie" here.) I'm embarrassed I forgot this remix when I first created this list, but I'm not embarrassed to say I think it's markedly superior to the lovely but unassuming original.

This inventive remix starts out on the wrong foot, by (again) recycling Madonna's, "Hey, you guys!" from "True Blue" and, "Dance!" from "Into the Groove," but it expands into a version of the song that sounds at least as good as the original. The stripped-down music in the beginning definitely prefigures "Justify My Love" and "Erotica." And the extended note at the end will definitely make you, "Hit it!"

Amazing that this one slipped my mind at first when it's clearly one of the best things that ever happened to a Madonna song, a reimagining that made the appealing but unchallenging American Life track into an urgent pop cultural anthem.

Madonna's gorgeous cover of Marvin Gaye's "I Want You" was as inspired as her cover of Don McLean's "American Pie" was insipid, but its reworking by Warren Rigg made it a dance-floor revelation. The most ecstatic change is Rigg's careful manipulation of Madonna's phrasing and timing, changing an achingly slow love song into a frantically fast sex song. Toward the end, it disintegrates into a whirling-dervish frenzy before finalizing with one of Madonna's trademark whisper-sung vocal raps.

Gotta love the underwater effect on the chorus and the wall-to-wall synth pops that sound like aural bubbles. When Madonna's voice sputters through those opening lines, it's a whole new take on the song. That plus the isolated, jacked-up instrumentation and syth sound really get at the heart of what makes the song work musically, and made for one of the most explosive choices a DJ could make at any club when it came out in '89. Around the 3:00 mark, Madonna suddenly sounds like Annie Lennox, if you can believe it. And if you can't, I'm just expressin' my opinion...is there a law against that or somethin'?

Gawd, this bombastic tweaking of one of Madonna's biggest (#2), yet least remembered (she's only sung it on two tours in 26 years), hits slays me every time. The staccato "ooh-ooh-ooh-baby" is divine and the song's pop's roots have gone fully house; this is a blueprint for "Express Yourself"and "Vogue," even if it came from a movie that hit all the wrong notes at the box office. Just when you think it's done, it lets you have it with, "Hey-hey-hey-hey-hey-hey-hey-hey, c'mon!"—a trick that would pop up in several other Madonna remixes— as well as the stuttered "c-c-c-c-c-commotion" and that killer piano.

I wonder if I loved that first one even more because I got to dance to it at Sound Factory? I just think it's a brilliant reimagining of a moody tune that could easily have been murdered at the hands of a remixer. Don't look for a rematch anytime soon—after Junior released "If Madonna Calls" (remix here), featuring a message she left on his answering machine, she cut of all ties. Madonna's PR Liz Rosenberg has said: "I can assure you that Madonna will never work with Junior again."

But it's probably the second remix that most fans would pick as one of the best of Madonna's entire career; no argument here. It makes "Secret" into a completely different type of song, but it's still a song and not a DJ-driven mass of messy music. Madonna's humming gets a reverb that's still electrifying.