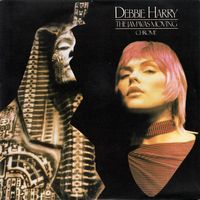 Some readers expressed disbelief when I posted that Debbie Harry has never been in the U.S. Top 40 of the Billboard Hot 100 as a solo artist. It's true! And what follows are the dozen singles, in ascending order, that really should've been massive hits for her in the U.S.. (We all know "Mind Over Matter" would've been a solo #1, but I'm only selecting songs that were actual singles.)

The lead single from Debbie's scandalously overlooked Def, Dumb & Blonde (couldn't consumers see that one of the Silence of the Lambs victims had the poster on her wall?) album was this rollickin' (if uninventive) number that came courtesy of a collaboration with a couple of the Thompson Twins. I think it's supercatchy and has a nice sense of optimism when she theorizes that the 21st Century will be much better for a girl like her. It may have been, but not chart-wise. The vampire video is a touch cheesy, but Debbie looks stunning as she prefigures Twilight by two decades.

Jesus, people...how was this not a smash? Debbie's voice glides freely over the '90s production as, in the video, she serves Cathy Dennis-meets-Patsy Kensit realness. Her husky vocals are spine tingling. I think maybe one problem Debbie always had was her singles were always carefully selected to cater to the radio, radio felt they were insincere and so they fizzled. Had she released some of her more out-there album tracks, perhaps one or more would have struck a chord and demanded some airplay? I don't know for sure, but with a killer pop track like this (from Debravation) never even denting the Hot 100, something was up.

In the same way Blondie's irrepressible "Maria" should have been a smash in the U.S. and was not several years earlier, Debbie's fresh, uplifting "Two Times Blue" should have cracked the Top 40 in her homeland...and didn't come close. One of the only really great tracks on Necessary Evil, "Two Times Blue" did, however, land the sexagenarian back in the Top 5  on the dance charts.

It was anything but clear in 1983 that Debbie Harry was not destined to have solo success. She'd stumbled with her first album, but she was under 40, hot stuff and still a name, right? With a bubbly, electropop tune like this, which was somehow included on the Scarface soundtrack, she failed the finger-to-the-wind test by peaking at #105. One of her bigger dance hits, "Rush Rush" nonetheless should've hastened to the Top 10.

I have it on very good authority that Debbie herself isn't sure what the fuck this sumptuous ballad was even about, but she sure sounds good singing it. Maybe it's the question mark that sells it, like the expressionless face she can summon so easily, as in this, one of her more artistically successful solo videos. If Sophie B. Hawkins could wring an AC hit out of radio around the same time, it's a shame Debbie was denied a wider audience with this beauty.

This lead single from Debbie's Rockbird was perhaps too gimmicky for her own good. But as high-concept as it was, clearly designed to raise eyebrows (and penises), she always sang it passionately and without, ironically, her tongue planted firmly in her cheek. The video is a confused mixture of humor and eros. She might've been served better by simply rolling around on that bed and reminding everyone what a hot, if curvier, piece she still was at 41. Whatever went wrong with this single, it didn't go too wrong: The song rose as high as #57. To this day, I can't believe some of the challenging stuff that went Top 40 that same year while Debbie Harry singing about tongue-kissing couldn't muster the strength.

Back when Debbie was still making solo music that marched to its own drummer, not being mindful of Top 40 mores (Why should she? Blondie never had!), "The Jam Was Moving" became her second single from her solo album KooKoo. To my ear, it sounds exactly like Blondie, right down to a crazy-crazy-crazy vocal that's filled with determination and experimentation. It sounds really modern to this day, so perhaps it was ahead of its time? Following hot on the heels of her  debut single "Backfired" fizzling at #43, this one died at #82, in spite of being a far better song. ("Backfired" is okay, but feels like a "Rapture" retread; its selection as the first single of her solo career remains a mystery to me.)

One of Debbie's loveliest slow songs, "Brite Side" emanates hope and romanticism. It also contains one of her most fragile vocal performances, encompassed by a production that fairly shimmers. Gorgeous. Dead ringer for Michelle Pfeiffer in the atmospheric video.

After it became clear Debbie was not being handed a solo hit by American radio, I still never gave up hope. Honestly, even after so many other near-misses, I thought "Liar, Liar" had a  terrific shot. A spirited cover that graced the (hit) soundtrack of the popular movie Married to the Mob, it was also graced with a charmingly goofy video in which Debbie seemed to be having a blast. (Who wouldn't enjoy vamping on a table top for "Grandpa" Al Lewis???) I am ecstatic to own a couple of stylist Maripol's test Polaroids from the shoot. I creamed—hard—when I tracked down a picture-sleeve 45 for this song back in the day. But then, the difficulty I had in finding it, rave review from Rolling Stone notwithstanding, should've told the tale: Single success was not in the cards. Again.

As good as any other '80s power pop, "In Love with Love" had a hard-driving bassline and featured a piercing vocal that always reminded me of "Heart of Glass" in parts. I think the horrifyingly bad video revealed Debbie's disdain for the song, but what does she know??? My favorite from her shrugged-off album Rockbird, "In Love with Love" was Debbie's last-ever appearance as a solo artist on the Hot 100, tanking at #70.

Never has Harry had a song that represented a more perfect union of her hot and cold sides, and "Sweet and Low" is her best solo video, Giger be damned. Awash in Stephen Sprouse visuals and fashions, homaging Andy Warhol, looking more stunning than Garbo and teasing us with her killer blank stare, post-/pre-Blondie Debbie peaked with this slinky dance hit. When she cascades from her own lyrics into a riff on "Swing Low Sweet Chariot," it's divine...literally! Hit a paltry #17 on the dance charts, but was omnipresent in Chicago clubs that year.

In spite of being an enduring dance classic (it hit #5 on that chart), this amazing number put together by Harry, Toni C. and Jellybean Benitez never touched the Hot 100. It was on the soundtrack for the forgettable movie Krush Groove, which nonetheless was an early and influential hip-hop production. This should have been a #1 hit, I tell ya. Who does a girl from New Jersey have to blow to get some love from radio?