The Dear Hunter: A Review Of Christina Crawford In SURVIVING MOMMIE DEAREST Comments (10) 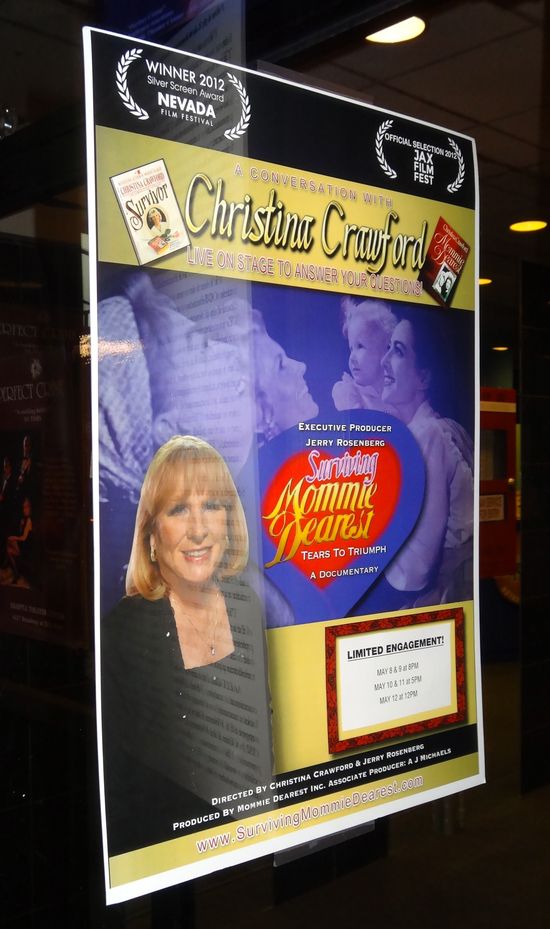 I was invited at the last minute to see Surviving Mommie Dearest, which is billed as a multimedia one-woman show starring Christina Crawford and executive produced by Jerry Rosenberg. Christina is, of course, Joan Crawford's 73-year-old adopted daughter and the author of the book that blew the lid off of her late mother's carefully constructed image. How could I miss this sure-fire campfest, right?

When I arrived at the theater, I recognized 50% of the audience assembled for the special press performance. Several volunteered to me their contempt for Christina, who they view as having made up her story of abuse or who they think should be "over" it by now even if it were true. I regularly get into Facebook scuffles about Christina vs. Joan, with my take being: She's very likely telling the truth, we know she suffered some kind of abuse, why can't we admire Crawford as an icon and actress and still acknowledge she was nuts? (Maria Riva makes that case for her muti dearest, Marlene Dietrich.) 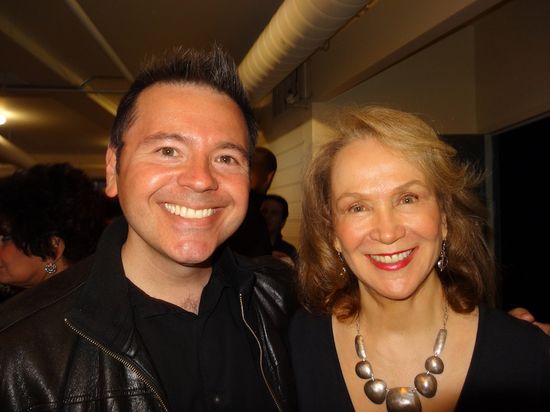 With the radiant Rutanya Alda

The show itself is not distinguished. It consists of Crawford doing some interstitial narration and a long documentary played on DVD. That Crawford is standing and talking in the DVD, too, makes for a static presentation. The filmed documentary is not as professional as it could be, with amateurish edits and a strong need for better direction and at least a few better takes.

There is not as much camp as I'm now ashamed to admit I'd hoped for. Granted, it's not camp-free: Christina's seething contempt for her mother surfaces at odd moments, in the form of an unnecessary mention of Crawford's alleged porn movie and throw-away comments like the one about her mother being a "corrupt Hollywood hustler." Most outrageously, Christina has a long sequence in which she explains her abuse as being about her status as a "bad baby," and an interminably long original song played over some priceless home movies of Joan languishing nude in the '40s. (The song repeats "everything is not as it seems" so many times I felt like I was at the nearby Scientology Center being brainwashed, and it also awkwardly contains lyrics extolling Christina's virtues.)

I don't hold Crawford's mercurial bitterness against her. I'm not of the "forgive! forgive!" school. If my mom had done that stuff to me, I'd likely bring it up often and never have a kind word to say about her either.

All that negative stuff aside, I have to say there was a lot to recommend in the show for any fan of Joan Crawford, any student of pop culture and most expecially for anyone dealing with abuse. Christina offers plenty of new nuggets in the documentary, and while the material covering her life after her book (and after her devastating stroke at age 42) is not exactly glitzy, it paints a picture of someone who is as earnest about trying to be a good human being as her adoptive mother was earnest about trying to be the biggest star in history.

The very end of her documentary spends a lot of time on how to overcome abuse and highlights Christina's survival instinct. During this segment, it was hard for me to understand why she has her doubters.

After the presentation, Christina took questions from the audience, and it's here that she really shone. When someone blurted out that she's just unbelievable, she put her hand on her hip and gamely said, "Well, I hope I'm BELIEVABLE!" She definitely has a strong sense of who to call on and how much to indulge their question (she brusquely blew off a query about whether she'd ever read her mom's memoir), but she is quite open and supremely relaxed (in contrast to some of the filmed interviews).

She razzed the movie Mommie Dearest and Faye Dunaway, whom she blamed for its camp nature. When columnist Michael Musto asked if maybe Faye couldn't be blamed for things beyond her control, Christina said, "Nothing was beyond her." And you know, that holds water! (Most charmingly, my pal Chris introduced me to Mommie Dearest's Rutanya Alda, now 70 and looking many years younger. I'd love to know what she thought of the show she viewed from the front row.)

I asked her how she deals with fans who don't want to believe her, and she replied that it's not about her, it's their problem—she is fine with your need to doubt her.

The best question came from a man who's known Christina for 50 years: He wanted to know who in Hollywood knew she was being abused and did nothing. Christina declined to name names, but was still furious after all these years when recounting how so many of them said they'd never seen any signs of Joan's abuse when she, Christina, knew they had. She made the excellent point about Hollywood being a company town in which everyone was beholden to a very few studio heads, so no one spoke out about much of anything.

With that, she drew the night to a close and disappeared, letting us all try to sort out the weird show and its many peaks and valleys.

I'll say this: I would've paid for it even if I hadn't been invited, and I'd still recommend you check it out if it sounds like it's at all up your alley.