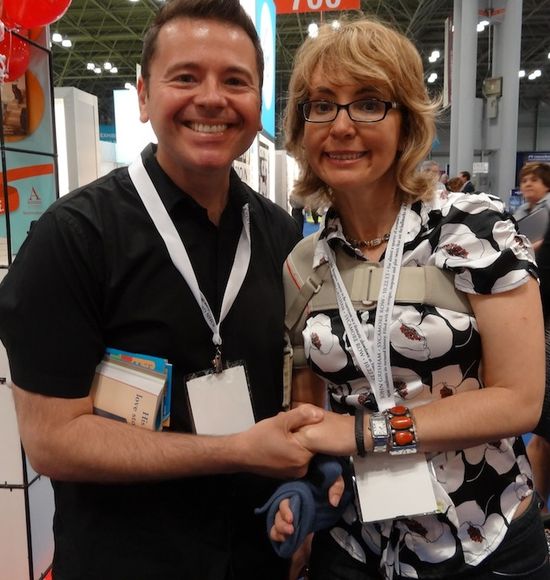 Gabby was visiting the publisher Algonquin and did a dozen or so quick pic-withs.

Aside from the fact that my hair is a travesty (use voice of Vivian Vance), I had some fun at BEA, the big book-publishing convention. Grindr was quiet as a mouse (bookworms...harrumph!), but I was 0 feet away from Gabby Giffords (whose astronaut hubby was a tad overqualified to be our photographer), Tim Conway (who was scolded for not smiling by the random guy who took our shot, even though he did!) and Jim Carrey. 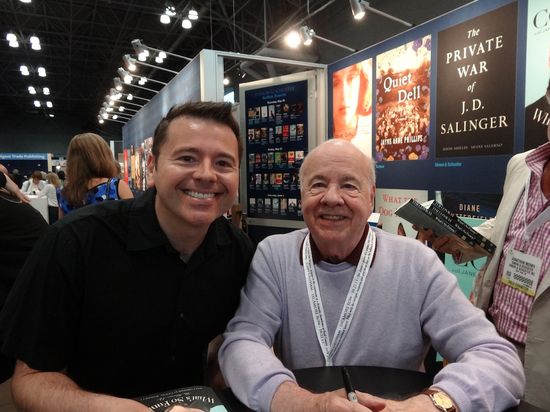 No interaction, but an honor to be in his presence. Got his new book, What's So Funny?, free.

Carrey's was the only real production, including a lengthy line and crazed fanboys and fangirls. One, Eva, wants to marry him and totally deserves to. They'd be cute together! Carrey was doing the quickie/across-the-table pic-withs, so that is always a great way to bring out my double chin. But the lovely girl who took the shot did well by us. 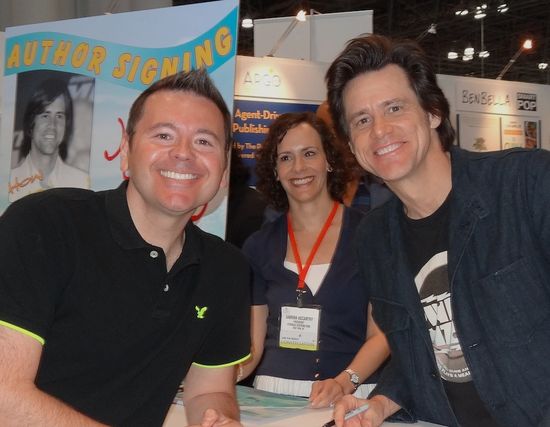 The photogenic editor or publicist photobombed everyone shamelessly.

When I had my 4 seconds to speak to him, I had figured I'd blurt out something about Phillip Morris, but I instead found myself referencing Duck Factory (!) before telling him to please keep giving 'em hell on Twitter, even if hell doesn't exist. "Yeah...it's a crazy world," he offered, perhaps thinking a promo even for a kiddie project wasn't quite the right place to dwell on deeper topics.

An adorable "power reader" (I prefer power bottoms) on line with me features in my video.

The only other celeb I bumped into was James Frey, and I didn't know it was him until after. He was very friendly. He kept eyeing me in a non-sexual way, and I later figured maybe he was wondering what my  opinion of him was? Nice, though.