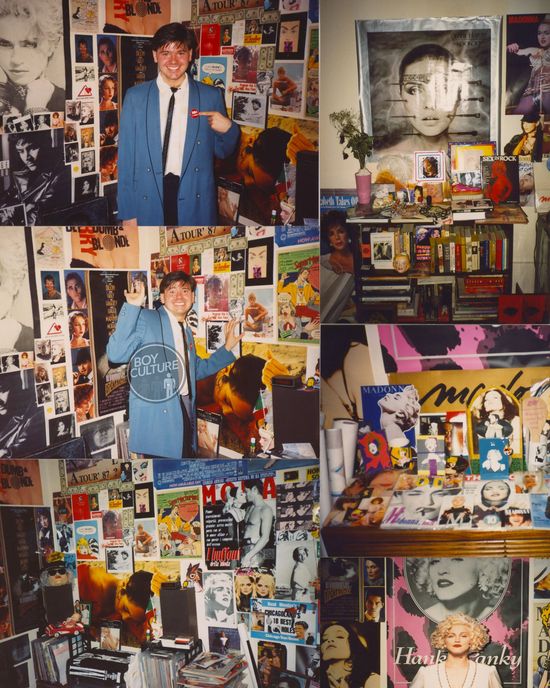 I believe the three on the right are from just before I moved into the ones on the left.

Once I graduated college, you might think I'd have graduated from gonzo wall décor fronted by Madonna. Nope. In 1991, I was living in Chicago's "Boys' Town" (I never called it that) on Belmont with my buddy John, who made incredible Madonna, Debbie Harry and you-name-it plasticized crucifix jewelry that I coveted (I still have my Blondie one somewhere).

My room was my oasis: I was 22, I had been through college (and Depeche Mode and Bjork and Kate Bush) and I was reverting to my go-to girls (Madonna, Marilyn, Debbie) and adding in lots of found art, things like the frameworthy headline placards from the Chicago Sun-Times and Trib outdoor newspaper dispensers (a favorite read, in stark lettering, "WHAT DID REAGAN SAY").

In the above mish-mash, taken the night of a party thrown by my professor's T.A. Shari Roberts that required fancy dress (hence my vintage usher's jacket...before Usher was Usher...with it's "10 cents a dance" button), I can spot:

Madonna, George Lamond (he of "Bad of the Heart" fame...I met him at a release party, introduced by my stripper roommate/ex, Floyd Underwood, a dicy chapter in my story), my mom, Debbie Harry, Marilyn Monroe, Matt Dillon (and the rest of the Bloodhounds of Broadway cast...what an underrated gem of a movie...Ebert liked it!), Sade, Elizabeth Taylor, myself by Leo Hsu from the University of Chicago production of Torch Song Trilogy), a vintage ciggy ad, a signed David Lynch 8"X10" (I raided my boss's Roladex and wrote him a mash note over the Wild at Heart car-crash scene), Liza Minnelli (raided the same Roladex and sent her a Valentine's Day card via her later-hated stepmother, for which I received three Results-era autographs!), my friend Sandra Engle's

There are many other incarnations of "the room." In some ways, it lives on, via more high-end art and actual framed objects. I hope to have a nice party soon and if I do and the place is up to it, I'll post the shit I have up now.

Madonna is not entirely absent.