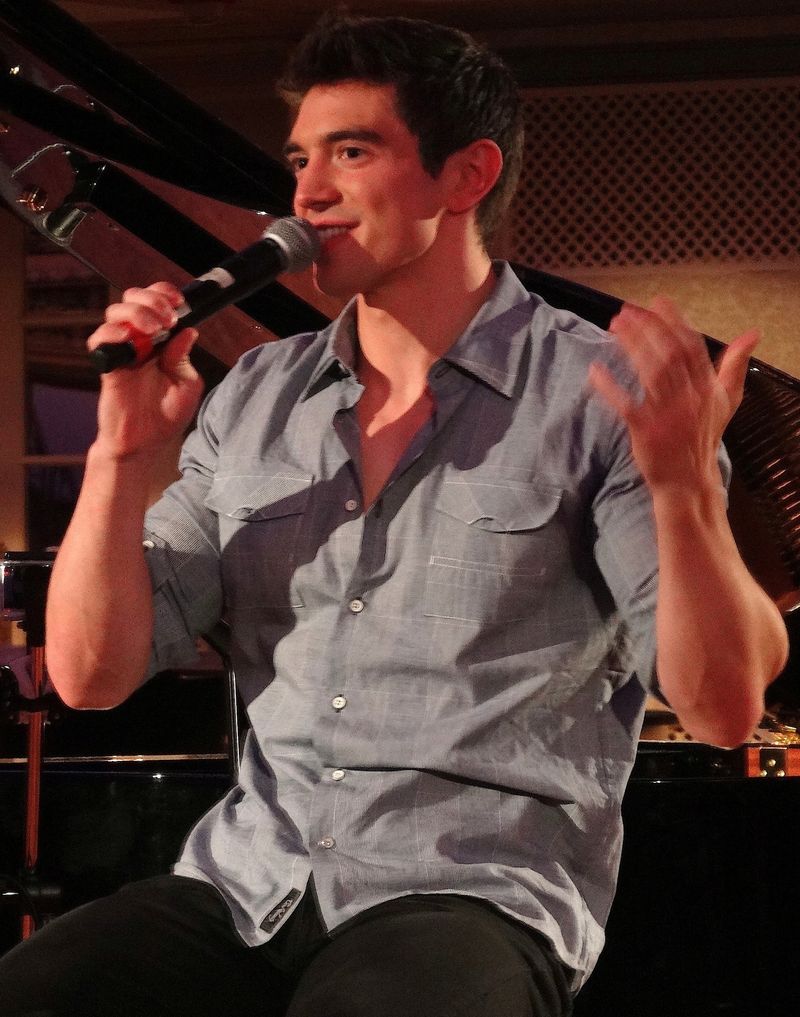 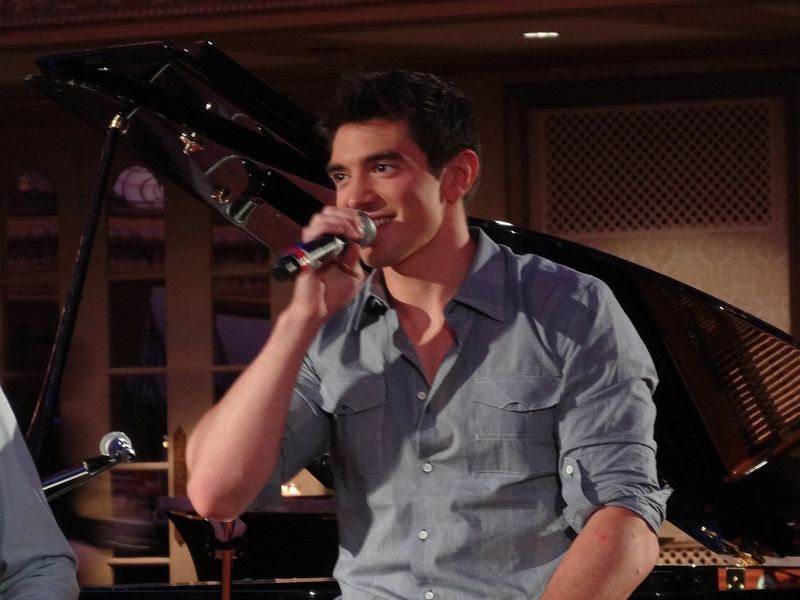 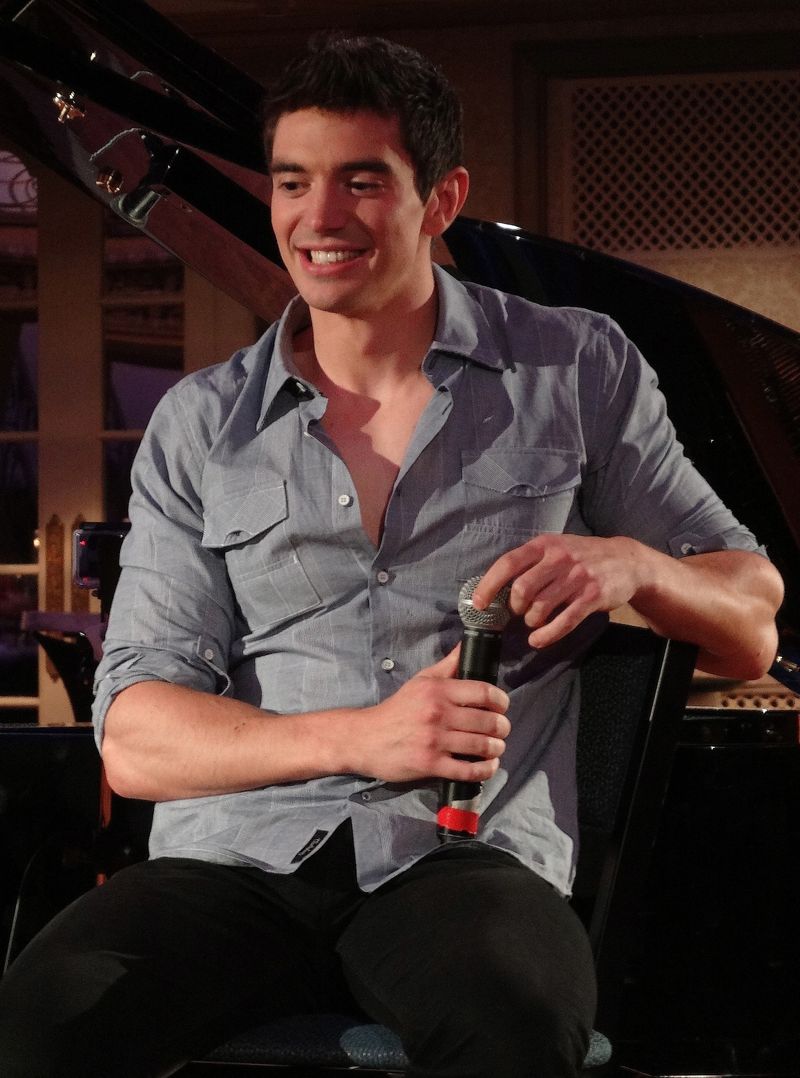 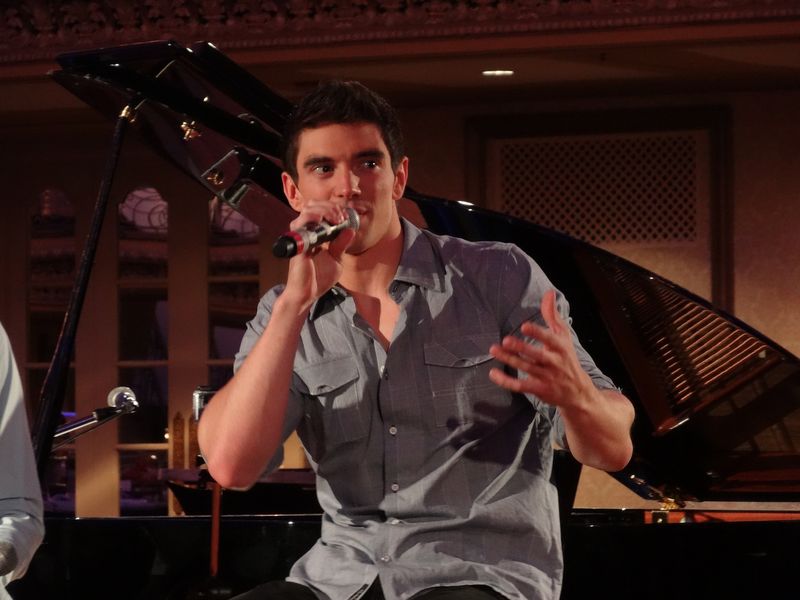 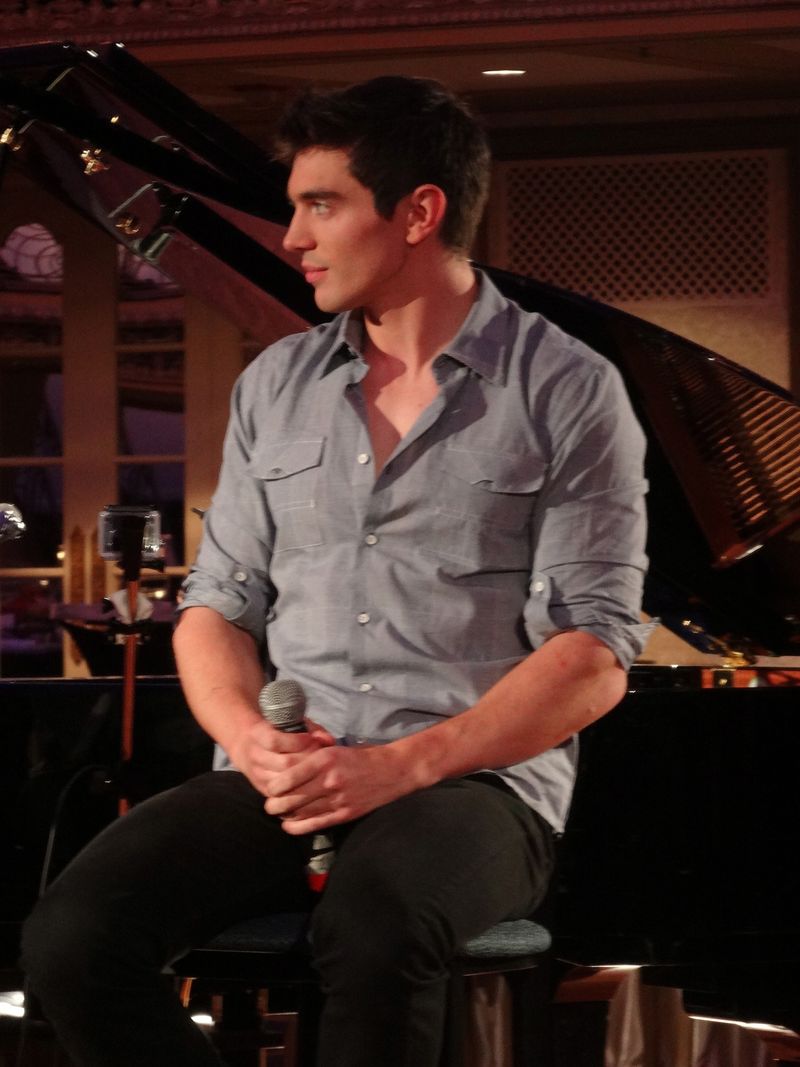 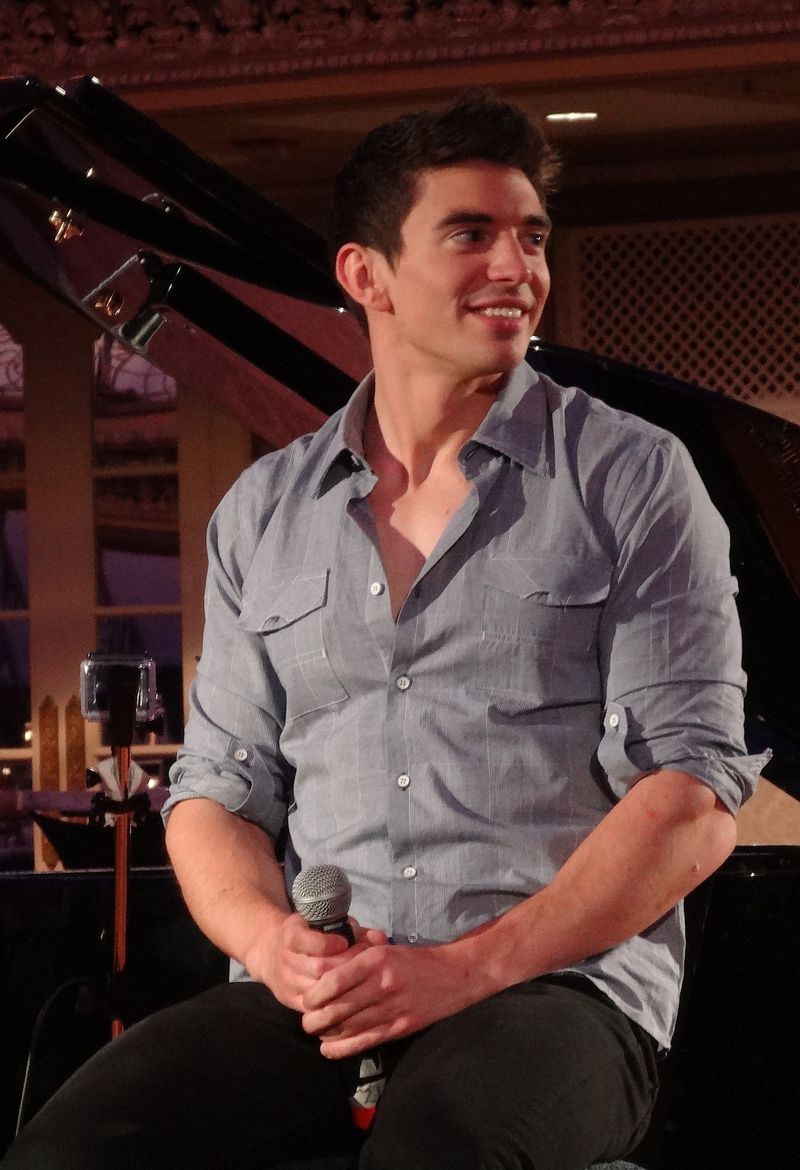 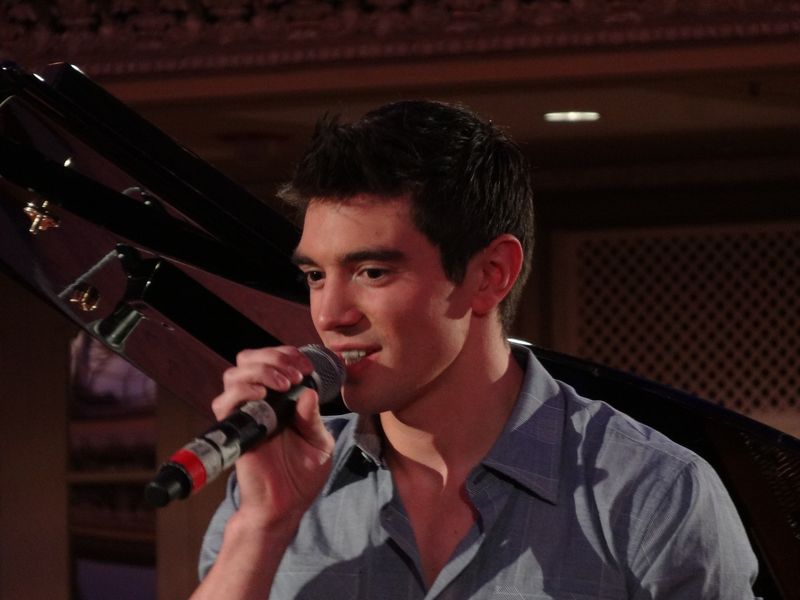 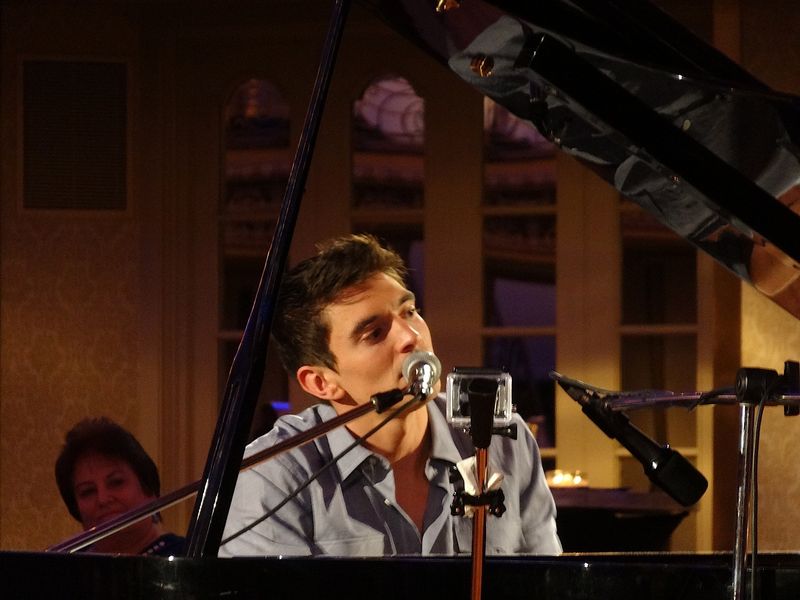 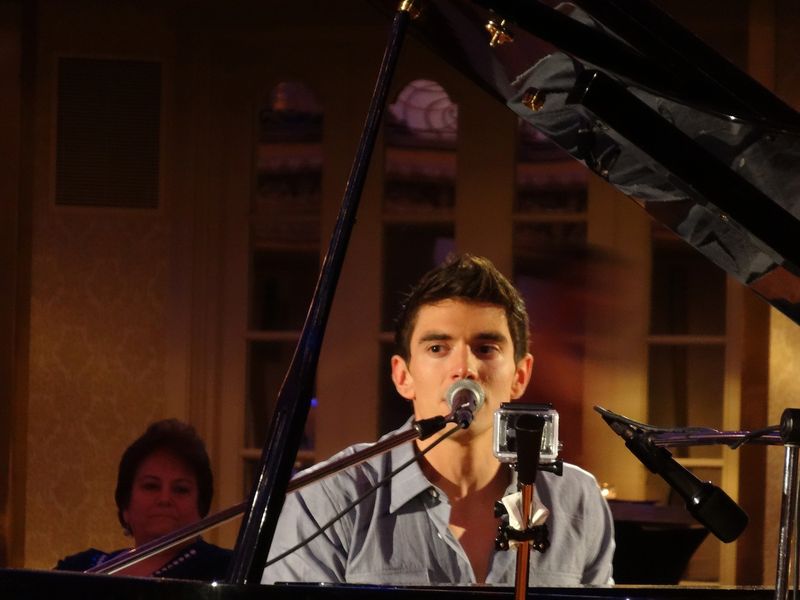 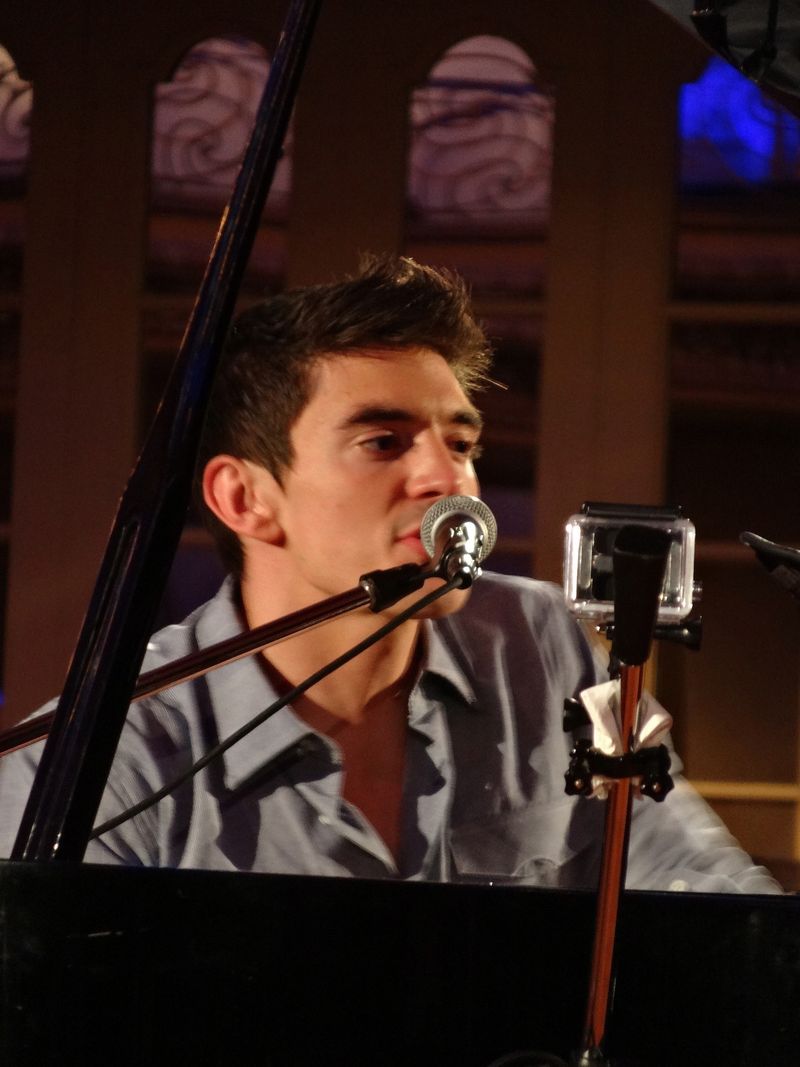 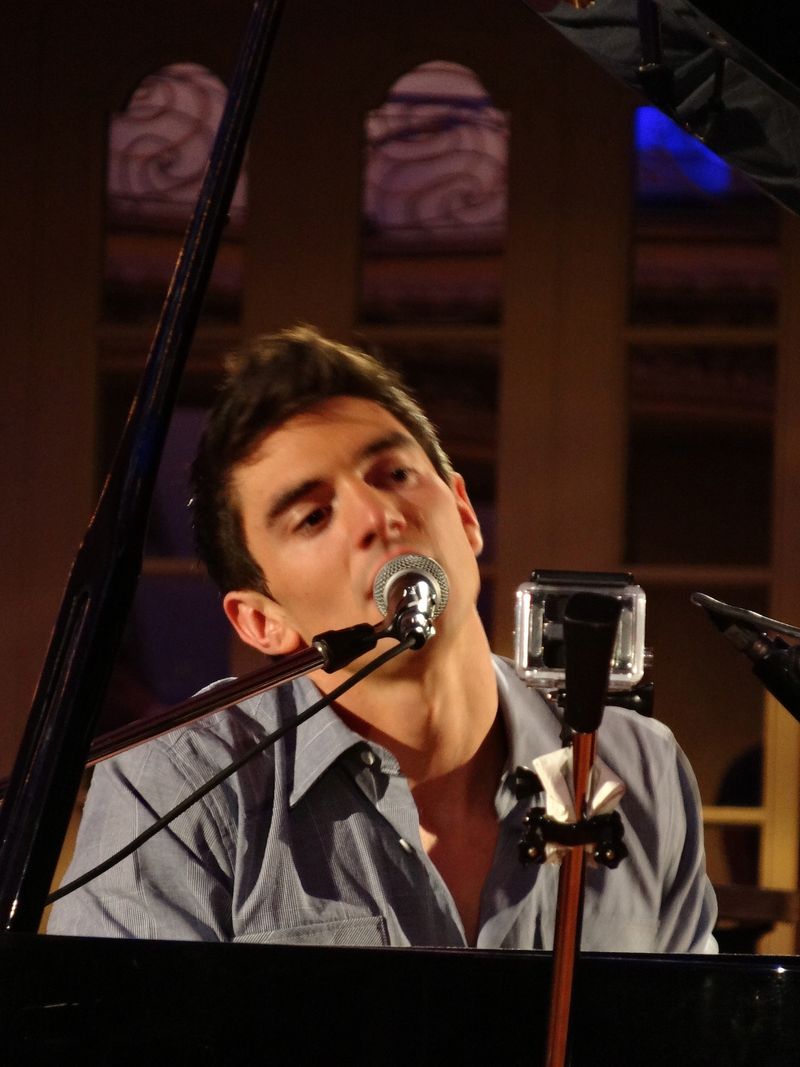 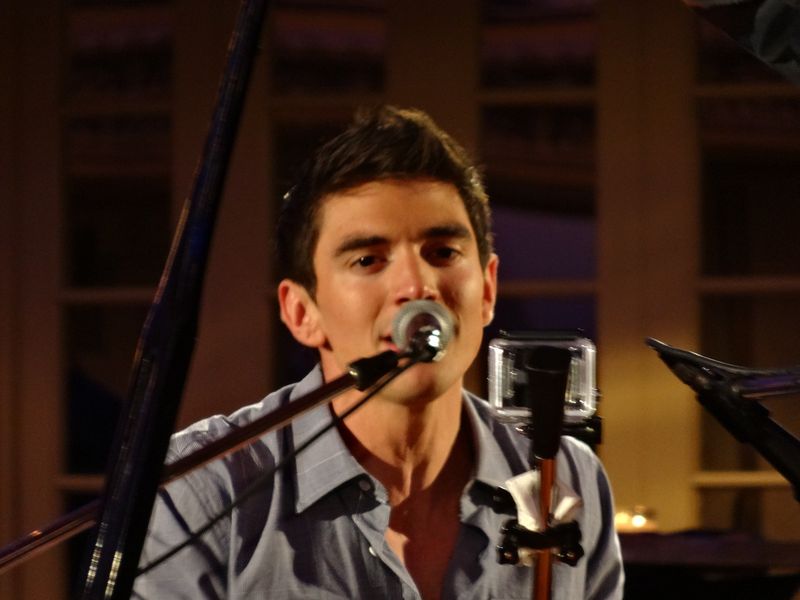 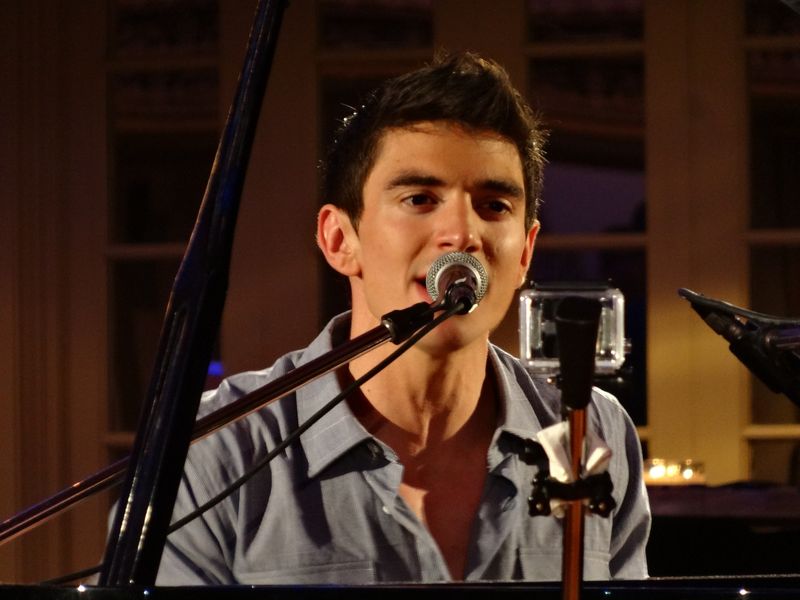 I'm in Chicago for a weekend visit with my family, but I'm making some time for "family" affairs as well—I'll be attending Northalsted Market Days, the music- and shirtlessfest featuring such diverse acts as Lynda Carter, Kerli and Olivia Newton-John. Hey, where else can you see David Cassidy open for Andy Bell? I'm going in spite of the visceral reaction I have to the world "Northalsted," which begs to be "North Halsted" or at the very least "Northhalsted." "Newsstand" comes to mine. But I digress! 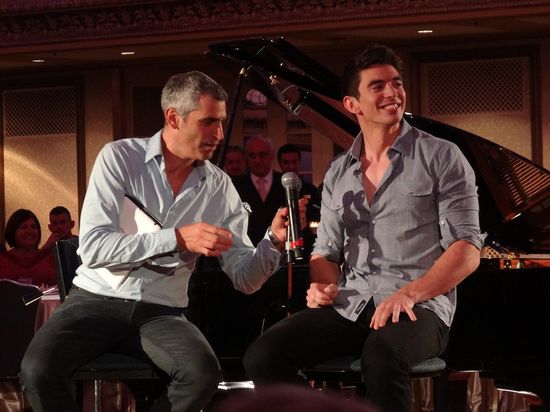 Out editor Aaron Hicklin had Steve on the hot seat.

The fest also features out singing sensation Steve Grand, who will open for Wilson Phillips tonight at 8:15. That would've been my first time seeing Steve perform in the flesh, but I was given access by the Hilton last night to a special event for the Point Foundation at which Steve appeared and performed. 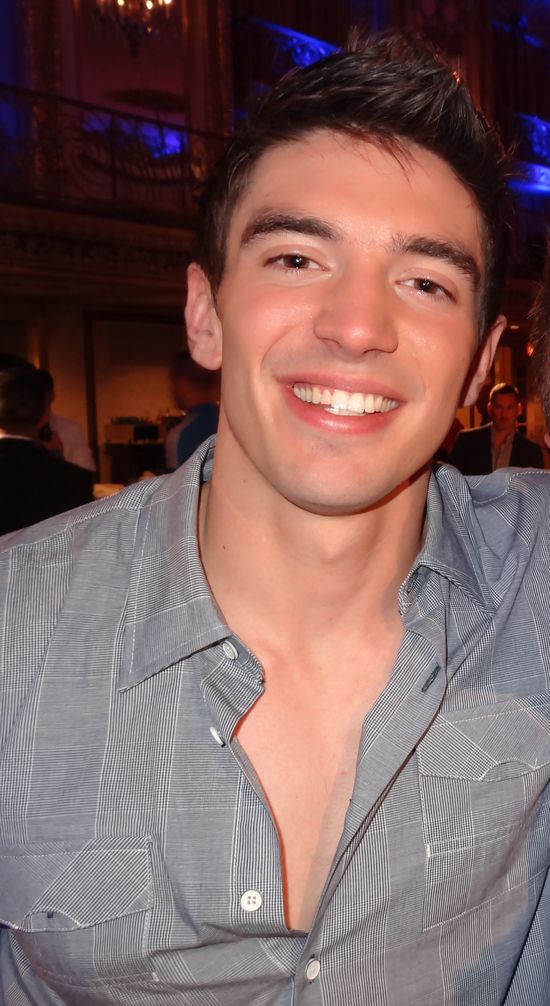 Connectivity is the key to this trip already. At JFK, for the first time ever, Grindr told me two people were superclose to me...and I could actually see them! One was this sexy Latin tattoo canvas whose Instagram was linked to his account. So I followed and commented, "First time I ever followed an Instagram from seeing a guy in the airport." I was sitting literally a foot away from him, so got to experience his laugh when he saw the comment. I did not, however, say, "Hi! It's me!" Instead, I spent my time liking his old photos. So that is a special kind of disconnected connection. But I have promised to say hi if I spot him at Market Days. 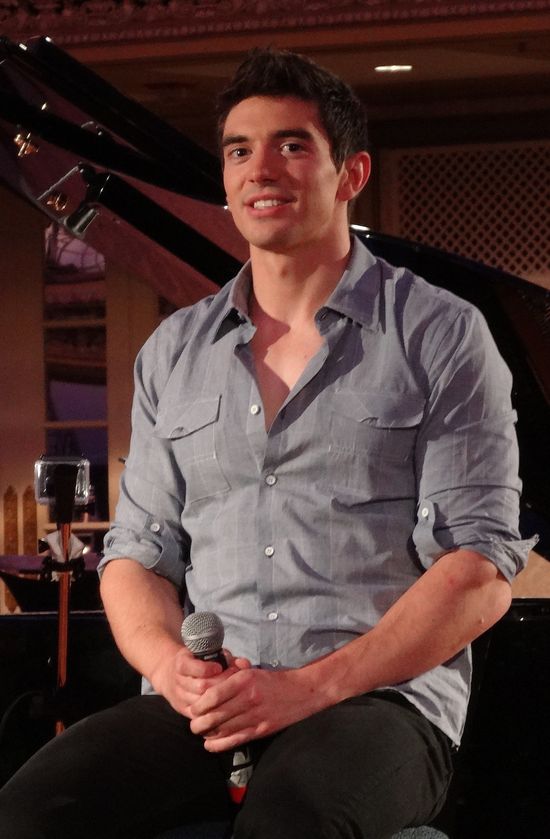 Last night's Grand event was very much about connection—a roomful of family members and fans had been invited to listen to Steve be quizzed by Out editor Aaron Hicklin, using questions submitted by fans from as far away as Iran. Steve's parents, with whom he was at odds 10 years ago when he began "straight therapy," were there, too, clasping hands with each other and with his grandma, clearly having made a lot of progress in the intervening years, beaming with pride that their son was the center of so much positive attention. 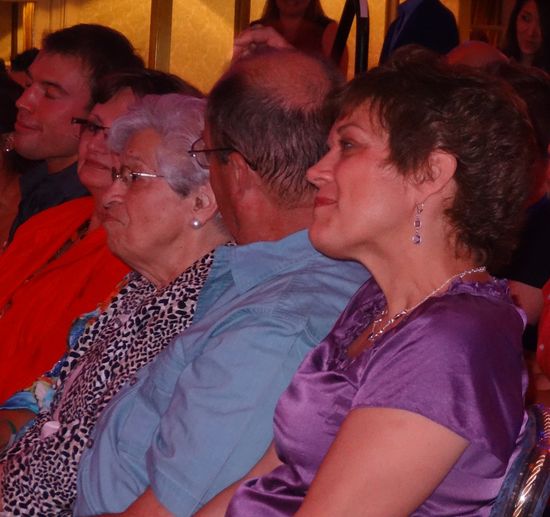 Steve's mom, dad and grandma looked on as he (literally) sang their praises.

My sister and I were in the second row with a (mostly) unobstructed view, so once I get a chance, I have video of the entire thing. But until then, the lowdown:

As we already know, Steve is a great interview subject. Hicklin chose to start the event by hitting on Steve, which is not necessarily a bad call. Things went from "what do you look for in a guy?" and "what's your workout regimen?" to more serious topics, such as the genesis of "All-American Boy" and how music has saved his life. 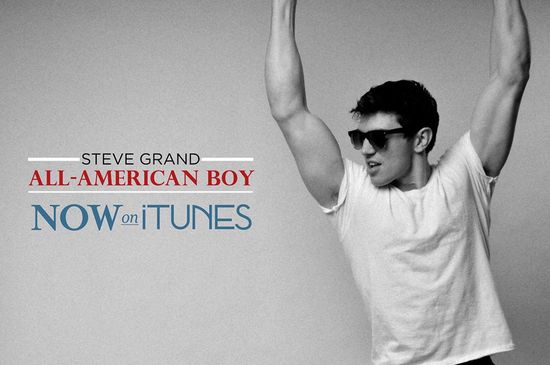 Steve is a charmer, a mix of aw-shucks and something more impish, but mostly wins people over by being completely unaffected. He sincerely thanked everyone for attending (lavishing attention on a pair of guys who'd come in from Toronto for him) and gave Hicklin unfiltered replies. He spent a lot of time looking over to the block of family members to his left, at one point noting, "Mom makes everything okay." 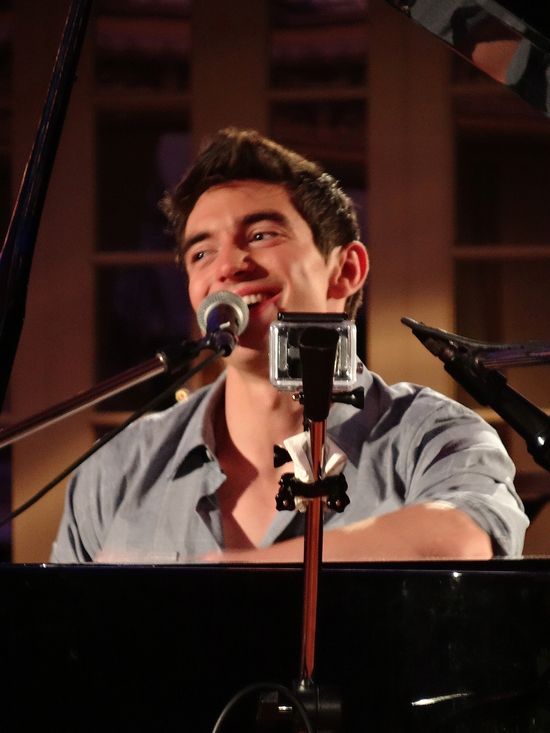 After the Q&A, Steve sold a $1,000 hug for the Point Foundation (you had to be there) and we listened to a beneficiary of the organization speak movingly of being gay bashed during his teens. The young man owes everything to the Point Foundation (he will soon be a doctor), and so it's only fitting that his hug also netted the group another $1,000.

Steve returned to perform, just him and a piano—and that's all it takes. His confidence and skills built up from years of honing his craft around town, he truly exudes a person at ease with himself and with expressing sensuality, vulnerability and love. 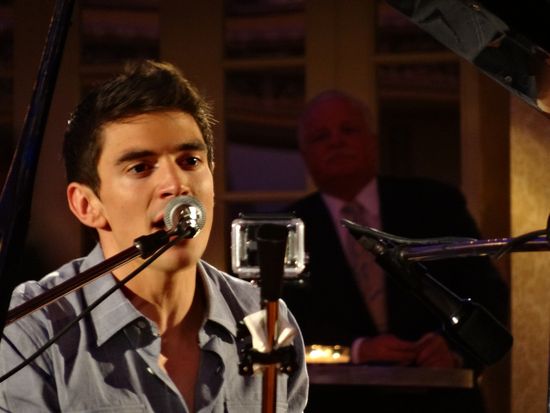 Steve was never off-key in spite of a few slugs of whiskey.

Opening with his rousing cover of Gaga's "You & I," he also treated us to "Your Song" and two new tunes, one of which he is about to shoot a video for and release as a single. It's in the same vein as "All-American Boy" but definitely not a sound-alike. 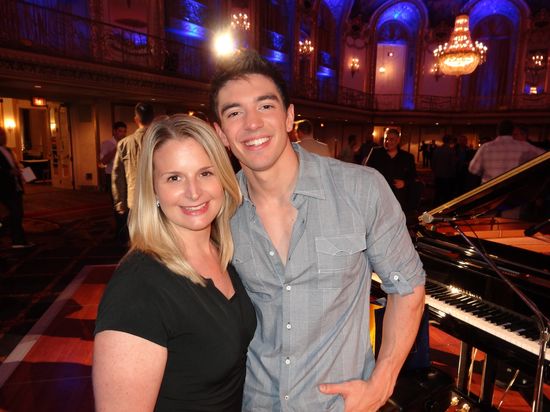 The other original song was an ode to "the real love of my life," which turned out to be whiskey! A good drankin' song. He closed with "All-American Boy," which was all the more moving in the presence of Steve's family sharing an embrace. 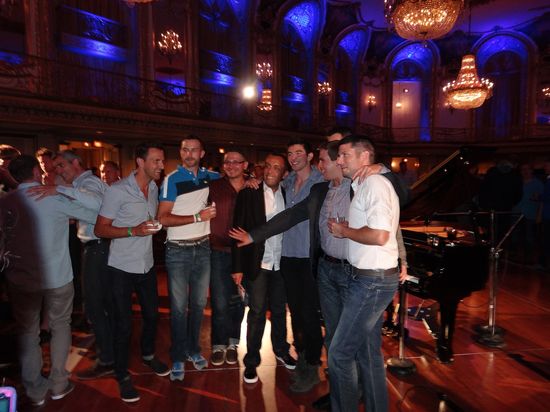 After, fans lined up for their photo ops, many in large groups Steve seemed exhilarated. He'd said earlier that if this was all his viral fame ever led to, he could die happy. But fortunately, it seems pretty obvious that the best is yet to come.