Nice Twerk If You Can Get It: A Trip To The Notorious Adonis Lounge Comments (0) 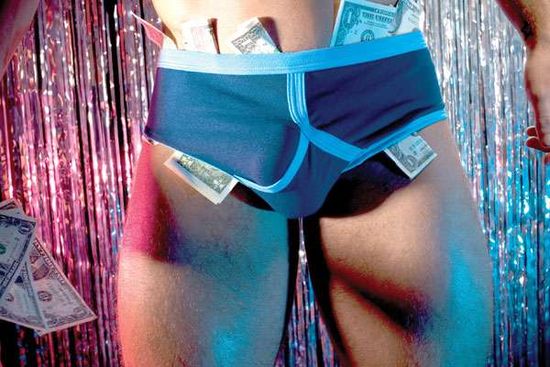 One-dollar bills to Adonis dancers are like pennies to waiters...don't even bother.

Last night, I did something out of the ordinary—I went with a friend to the Adonis Lounge, which along with 20/20 is one of NYC's only male strip clubs. (How I lived here while the Gaiety existed and yet never went is beyond me.) I'd heard it was "hot," but wasn't sure what to expect. 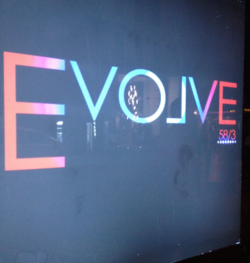 What I didn't expect was a very small bar (called "Evolve") with a very small "stage" on which performers gyrate distractedly while patrons are solicited for backroom lapdances. We turned to each other upon entering and after having immediately assessed the situation, thinking we might leave.

Glad we stayed. It was quite interesting and sleazily fun.

Wallflowers, we sat against one mirrored wall opposite the bar, where we could barely see the stage. No matter, a compact, hirsute performer in skintight briefs pounced on us. "First time here? Here's how it works..." The backroom lapdances are extremely free-spirited—hands can go inside underwear (some of the boys are in jockstraps for easier access) but not on boners. No kissing. Otherwise, it's the Frottage Mahal. Then there is the private or "Champagne Room," where for a hundred bucks you get to decide with your performer what the rules are. "I recommend you stay on the safe side," our volunteer guide offered. Good tip!

The next guy to approach us was a blocky blond with an all-American look and spiked hair. He had much of the same advice, but let us know that he felt the private room wasn't a good value since it wasn't private nor was it a room...the lapdances are performed on a series of bedbug-friendly couches, and the private room is just a couple of the same couches in the same room hastily curtained off by a sort of sheet. In theory, your feet could be sticking out from under the sheet while a dancer...dances...on you, all a few inches away from happy-lapped fellow patrons.

I'd never had a lapdance, so last night was a first. It was...nice! Note to self: The bigger the boys, the greater the chance that they'll snap your pelvis accidentally. I also encountered one hairy-backed, muscle-butted, flawless monster who helped provide me with an unexpected answer to the age-old question: "Is there such a thing as too much ass?"

The most aggressive guy was a beautiful Russian with nary a hair on his lean body. "Let me show you how professional I am," he urged in a thick accent, insisting. I know there's a boycott of Russian products, but that shouldn't include dancers, right? His style during a lap dance is to announce when each song is over (it's $20 per song) by saying, "We can do four, yes?" It never feels like a question.

"I don't do anything sexual," was the final word from one of the best-built guys there, a juiced six-footer who walked around the club with his underwear hooked under his generous buns, not that I asked. "I don't mean to embarrass you, but your underwear is down in the back," I joked. He looked at me like I was an idiot and told me, "I like it that way." I did not look at him like he was an idiot because I'm a better actor.

(The bartender was none too friendly, either, reacting to a joking query about when he would be dancing with a look that seemed like an eyeball punch and, "I. Don't. Dance.")

One of the nicest boys there, a silky-skinned black guy who looked like you'd meet him in a different kind of bar, date him and bring him home to mama, told us about working on Madonna's "Give Me All Your Luvin'" video. Yes, I know they all wore helmets, but his story was good enough that if he was lying he still earned my friend's $20.

My favorite guy of the night was a young Puerto Rican-born local, thin, and intelligent-looking (whatever that means...something about his features) and whose stage show consisted of A-plus dancing. Not in the Lady Gaga backup dancer way, he just had damn good rhythm. Boyfriend material, with only his heterosexuality to get in your way.

I asked him why he was wearing jeans, making him the most overdressed of the night. He confessed that while at first he had been reluctant to disrobe  at the club (he's relatively new) since so many of the dancers are musclegods, he'd eventually come to see that staying covered (and looking real) made patrons crave seeing more. Under the jeans, he had black g-string, which he later sported around the club once the pretense of unavailability had been, like his jeans, dropped.

He was so popular I almost didn't realize he was still there until the end of the night; he'd spent a good deal of time doing a double lap dance with a co-worker on a man twice their ages combined, so I waited to see if I could snag him for a few. I did, and he was as good seated as he was standing up when it came to dancing. He was also pleasant and conversational. A P.I. by trade (the "dick" jokes write themselves), he was the gold standard among the bar's workers, almost entirely removing the sleaze factor with his chipper attitude and wholesome looks.

If you're thinking of hitting up the Adonis, my recommendation would be that you show up with plenty of cash (though there is an onsite ATM; the patron before me left a receipt showing he was paying $2.95 to remove $40 from an account with $470.64 in it); be ready to deflect the hard-sell (one dancer dry-humped me hello and placed his dick in my hand rather than shaking); bring your sense of humor (the DJ at one point described a dancer's messy set as being "like the Democratic Party"); and be mindful of the fact that as naughtily fun as it all can be and as surreally sexhibitionistic, these are in the end—kidding aside—regular guys hoping to make some money, who are deserving of your most respectful groping.

Also, don't lose your cellphone in the couch, because when you reach between the pleather cushions, it is going to be a moist sensation not unlike reaching inside a cow to help birth a calf.