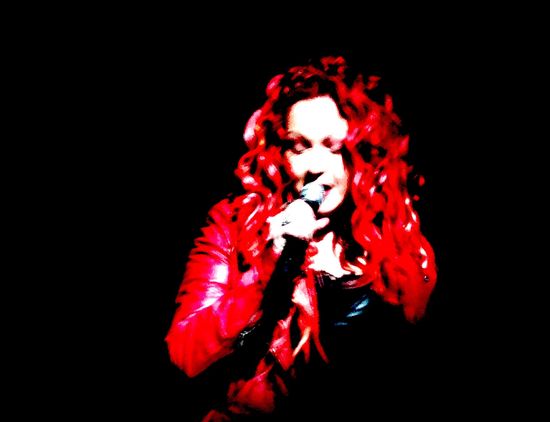 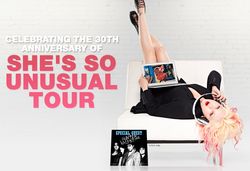 automobiles to get to. (Okay, just a subway and a bus, but it was almost two hours thanks to construction.)

The venue for her She's So Unusual 30th Anniversary Tour was petite, and while her show was big enough to feature openers (Hunter Valentine), it was small enough that it had a befuddled lady making announcements between sets, just like a Brady Bunch teacher might during callbacks for the school play.

Cyndi emerged in red—hair. I can't say, in all honesty, that this look (a structured, red-and-black outfit and impossibly huge, red wig) suited her, but she didn't look 60. Just think...Cyndi was 30ish when she became famous. If only Jay Z had been alive then, she could've auditioned in his hotel room at 15 and we'd be celebrating She's So Unusual's 45th..

Cyndi was not in good voice at first, so I'm not sure if it was that or the fact that some of that amazing albums ubiquitous singles sound dated now ("She-Bop," in particular), but I  wasn't really into it in the beginning. Then, when she launched into "Witness" and had to sing several songs getting their first airings in 30 years (or ever!) on this tour, her voice strenghtened and she was giving it her all, seemingly re-energized.

She did the entire debut album (my highlight was "He's So Unusual," her Betty Boop tribute to Helen Kane) and then gifted us with "Goonies," "Hat Full of Stars"/
True Colors," "Shine" and "Sex Is In the Heel." She did not do "Right Track, Wrong Train," the B-side from "Girls Just Want to Have Fun" that I've been dying to hear live since Day One. She apparently sang it earlier in the tour, though.

The best part of the show was Cyndi's tendency to stop everything and reminisce. She told us the origins of several lyrics, including how an annoyingly loud clock from then-loverboy David Wolfe that kept her alert inspired "Time After Time." She also slammed shows like American Idol, conspiratorially informed us that reality shows (of which she's had one so far) do have scripts and told us she'd been booed by 10,000 people while opening for the Kinks early in her career.

She also went after a security guard who was encouraging people to sit down during a song, asking him, "Is this a funeral parlor? Jesus Christ."

Check for Cyndi on tour now!