Art's In Pop Culture In Me: An Interview With Street Artist Pegasus Comments (0) 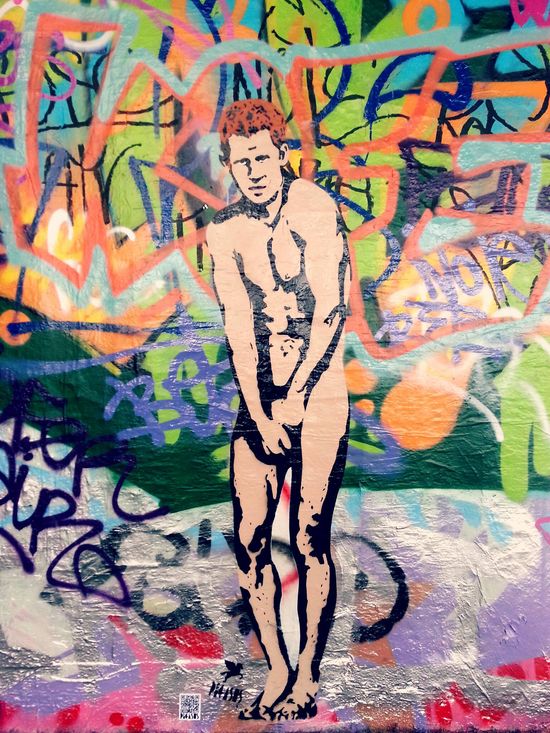 I'm a fan of street art, so yes, I was pissed I didn't find any Banksys to steal (or buy for a song) during his NYC residency. But I have had a Mr. Brainwash run-in/own some of his stuff, once pried a piece of an Invader mosaic from a local bridge, and have found two stunning works by Ty Cummings on the street where they were left for—presumably—me to rescue.

So I was intrigued by the work of Pegasus, which I think merges pop culture icons in ways that are more playful and quirkier than Brainwash's cynical-feeling concoctions. If you're wondering what I mean, look no further than "Strike a Pose," his clever, sweet marriage of Cher, Madonna, Janet Jackson, David Bowie, Elvis Presley...and maybe more: Unlike all of the artists I've mentioned, Pegasus is highly reachable...and reacted favorably to my interview request. What follows is my chat with this emerging artist, whose work is destined to decorate my walls one day...

Boy Culture: What's your art training, if any?

Pegasus: I hold a Bachelor in Fine Arts degree, but as far as stencil graffiti, I have no training whatsoever. I taught myself everything I know and hopefully my skills will continue to develop.

BC: How did you come to do street art and street-art influenced work?

P: It was kind of by accident really. I am a massive Amy Winehouse fan and the day she passed away I wanted to express my feelings for her through art. It was only while I was at the cash register paying for a canvas I looked up and spotted a shelf full of spray paint…and the rest is history.

BC: Who are your art-world idols, and would you say your pop idols are those that we see in your work?

P: My number one Art Idol is the genius Andy Warhol. I also admire other artists such as Robert Rauschenberg, Keith Haring, Mr. Brainwash, Daren West the Neon Artist, Horace Panter, Eelus and of course Mr. Banksy. I don’t know if any of these artists are visible in my work. I will let the spectators decide.

BC: The "Strike a Pose" piece reminds me of Mr Brainwash in that it's a mix of Madonna eras--was that intentional, and do you like his work?

P: I do like his work a lot, but to be honest, he wasn’t on my brain when I was thinking that piece up. I was actually watching Madonna’s performance of "Vogue" from the MDNA Tour and I thought it was amazing how she brought the JPG cone bra back! A little light bulb went on in my brain and I went to work at it.

BC: I liked your "What Makes a Legend" as a graphic way of considering that all our pop idols have elements of each other. Why did you select those particular women?

P: There are a few boys in there as well: Elvis and Bowie but I wanted to create an image using iconic bits from some of the world's best performers and make one perfect Legend. Plus I love each and every one of those icons, so for me it was a no-brainer.

BC: Do you make it all yourself, do all the painting and stenciling, or do you dictate some of it to helpers and paint in the rest?

P: I do it all myself. I am a one-man team, creatively. I design, draw, cut and spray everything you see with my name on it. I have had offers of help in the past, but I feel I would be cheating people if I had a team creating images in my name. 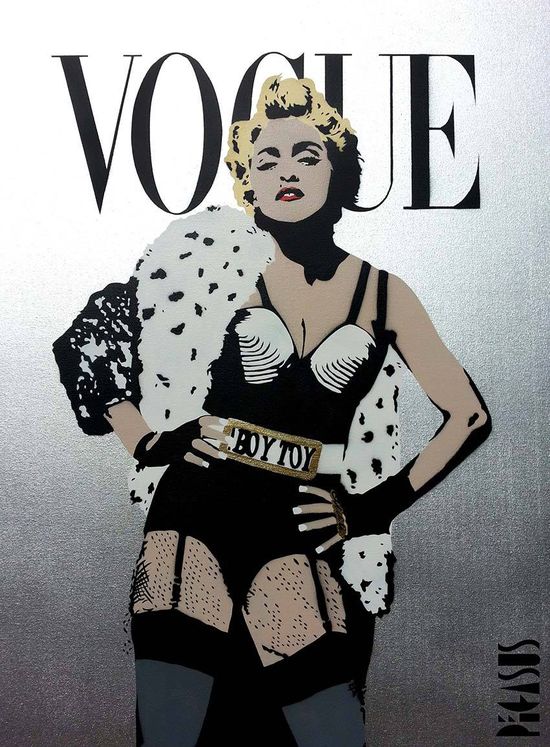 Would've been a rather nice Celebration cover in its own right!

BC: Finally, what's your favorite piece?

P: I have just sprayed a new Marilyn Monroe in London over the weekend [see image above right]. So far, this is my favourite piece. I have been playing around with the design for months and I finally got her out on the streets. I am very proud of her.

Learn more about the art of Pegasus here.