Her ARTPOP Could Mean Anything: A Review Of Lady Gaga's ARTPOP Comments (0) 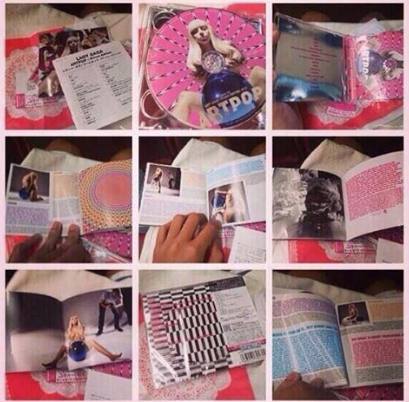 Images of ARTPOP packaging from the Internet.

I've now listened to all of Lady Gaga's ARTPOP, which we've been hearing about for a year. My review follows. Warning: If you're a Little Monster, I promise to die of AIDS ASAP, so no need to ask me to. More seriously, this is her first album I kinda hate. I have to write what I feel or there's no point in writing.

To kick things off positively: I think "Gypsy" could be her next bona fide hit and I love "Artpop."

The rest of the review after the jump...

I still hate this song, and it's particularly bad as an album-opening track, a disjointed mass of noise for well over  minute before dissolving into Gaga rasping about "the gorgeousness of my face." As has been noted elsewhere, the song's chorus (beginning at 1:42) is the best part of it, but is not strong enough to be a saving grace. The song is an aural mess, though thematically, it does set up the inescapable fact that—like it or dislike it—ARTPOP is a very committed, unashamedly unsubtle concept album.

Gaga's fans make much of the fact that she writes her own material. I think it's laudable to write your own stuff, especially when it's this insipid...I mean, it would be embarrassing to have to admit someone had to write this for it. Loud and empty, "Venus" might be the most pretentious moment on an album that is breathtakingly pretentious. This really feels like a case of an artist who loves the smell of her own butt. Actually, most artists, especially pop artists who are elevated to god-like status quickly, do love the smell of their own butts. However, they're usually somewhat reigned in by external forces. In the same way that the heinous Hays Code nonetheless inspired artists to produce amazing and creative work in spite of its pathetic, arbitrary limitations, most runaway, self-proclaimed "geniuses" wind up putting out good work within the confines of the label system, navigating an obstacle course of commercialism, censorship and fan demands. But "Venus"—and ARTPOP—sounds like what happens when the artist is big and strong enough to shrug off those limitations. It sounds like self-indulgent emptiness. And it doesn't sound particularly catchy, which is the cardinal sin in pop.

More references to mythological gods. This one has a breezy intro that reminds me of "Europa" by Blondie. When the futuristic blips and bleeps are over, Gaga launches into the first decisive vocal of the record, sound very much like the "I wanna kiss you..." of "LoveGame." The song doesn't really distinguish itself, however; it's another brash piece of fluff technoed up to sound edgier than it is.

This one I kinda liked from the time I heard her perform it. It has a nice, whispery "Erotica" rap and also possesses the first bona fide hook on the album. The production, however, is as messy as the songs before it, which dilutes the tune a bit for me and makes it hard to appreciate much more than the chorus.

I'm not the right audience for this obnoxious rap song fused with metal, fused with, I guess, dance. I do think Gaga's vocal (a minute in) is at least, for a change, competitive with the wall-of-noise production ethos. Points for "this family is stupid-attractive."

An out-of-nowhere '50s  rockabilly number that's superfun, this wouldn't be out of place in a Broadway show. But ultimately, it's an anthem about nails, much like her previous anthem about "Hair."

I like this kooky, spacey ditty. As smug as Gaga can sound when ranting about what art is (it requires discipline, talent and thought, y'know?), this sublimely simple song is as close to pop-art perfection as she gets on this album. And it sounds like the most effortless of all the tracks!

Another aggressive, angry-sounding, overproduced song, this time with a lyrical couplet that approaches and makes friend with parody: "I know, I know you want me/You're just a pig inside a human body." Honestly, this should be covered by Spinal Tap. Plus, it's unpleasant as hell to listen to.

You know you've lost all senseo of reality when you're writing musical odes to an emotionally bankrupt figure like Donatella Fucking Versace. The song actually starts out bitingly, but calling Donatella a skinny, rich bitch (and singing about eating only a salad the day you're walking the runway...didn't Donatella have an anorexic daughter?) winds up being a perverse celebration of the woman who is "misunderstood" and "magic." The lyrics here are terribly superficial, like the subject. Sure, the name "Donatella" makes for a great opportunity for Gaga to shout, "Dona-tell-AHHH!" but that's not really enough for me to ever want to hear this again.

The songs on ARTPOP seem to have a lot of false starts, followed by completely different sounds. This one begins like a '70s AM radio smash, then, on a dime, snaps into a dead ringer for David Bowie's "Let's Dance." I mean, just sing, "Let's dance..." instead of "Fa-shion," and it's the same song. It doesn't help that the word "fashion" in pop music reminds one of Bowie on its own. There is a verve to this song that Bowie's languid, coolly laid-back "Let's Dance" doesn't have, so it's not a clone, but I would be surprised if I were the only listener to hear the similarity.

I'm all for the legalization of pot, but I also hate pot, so this song was never gonna be for me. But I love the melody behind the bombastic, overproduced sounds.

This emotional power ballad is actually much more uptempo (and also reminiscent of "Edge of Glory") in its final version and sounds like the only other song on the album capable of being a smash radio hit. It's like Journey! At the Disco, and Gaga's voice is easy on the ears here instead of sounding intentionally raspy and raw.

I've already commented on this one, but I'll say that having heard it a zillion times since, it's grown on me some. I still find it annoying on more  levels than it probably even has to begin with, but damend if I couldn't dance to it in spite of its laughable Koons line. (I never liked Koons, but at least she picked him instead of Kostabi!)

The remixes (three!) of "Applause" are a nice added value if you dig the song. I would say I prefer the "Empire of the Sun" remix, which gives the song a "Deeper and Deeper" kind of easygoing vibe.