He Sang/She Sang: A Review Of BROADWAY BACKWARDS Comments (0)

New York's LGBT Center and Broadway Cares/Equity Fights AIDS will receive $423,182 from the annual Broadway Backwards event, held last night at the Hirshfeld. I'd never gone before, but 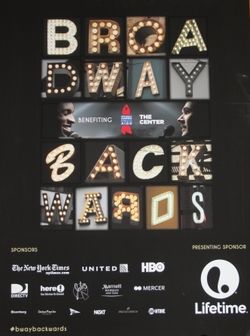 grabbed a friend (well, tried, but the young ones are fast) and hiked to the mezz to see a unique show in which Broadway performers sing songs originally intended for the opposite gender. Which reminds me: God, I miss that TV show Turnabout with Sharon Gless.

But back to the matter at hand: Broadway Backwards started a bit creakily, with an oddly unfunny sketch that had a dark tone and an inexplicable Christmas theme. But aside from some of the skits being a bit trying, every vocal performance was a treat, including great contributions from Bryan Batt, Beth Leavel, Billy Porter (who was calmly Kodama Sushi-ing moments before the show began), Stephanie J. Block and more.

Probably the most successful skit was Colin Hanlon, Stephen Bienskie and Max von Essen's head-for-biz-bod-for-sin same-sex romance that played out to the strains of "Been a Long Day." Have always wished I could see them do a three-way, but probably should have been more specific when wishing for it.

The overall highlights of the show were inarguable: Andrew Rannells belted out "The Man That Got Away" with a vocal and emotional range I am embarrassed to admit I hadn't previously realized he possesses, and the return of Patricia Morison.

Morison, who just turned 99, was Broadway's original "Kate" in Kiss Me, Kate 66 years ago. The mezzo-soprano first set foot on a Broadway stage 81 years ago and hasn't been seen on another in decades, so to witness her singing "Brush Up Your Shakespeare" from Kiss Me, Kate with gusto and wit and enthusiasm was truly a momentous thing.

After a radiant Morison, whose only tell that she was nearly 100 was her wheelchair, brought the house to its feet, emcee Julie White (sharing hostessing duties with little Bebe Wood of The New Normal fame) staggered out and quipped, "I'm supposed to say something funny—'I'll have what she's having.'" Continuing, White deadpanned, "This next performer...is fucked." The house went berserk. It was an unforgettably perfect delivery. (And the next performer was a fine Norm Lewis who, nonetheless, was fucked.)

The show also featured a pretty performance from pretty Jonathan Groff, singing, "Goodnight My Someone"/"I Got Lost in His Arms." Imagine losing Groff in your arms? I wouldn't want anyone to go Looking for days.

Overall, it was a great night of theater. So glad I didn't continue my tradition of missing this event.