The Booty Trip: A Review Of Mike Albo's THE JUNKET Comments (0)

Mike Albo's one-man, one-hour (and change) show The Junket at Culture Project/Lynn Redgrave Theatre is far more entertaining than any of the many actual junkets I've been on, and I've been to Disney World with an entertainment reporter who filed a police report when a free fruit basket allegedly disappeared from his room. Devious maids!

Albo was infamously deprived of his cherished freelance job ($900 per "Critical Shopper" column, twice a month) with the New York Times in 2009 when he was exposed by Daily Finance writer Jeff Bercovici for having gone on a Thrillist junket to Jamaica, in violation of the paper of record's 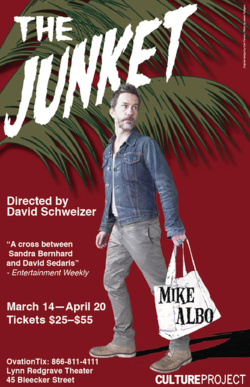 ethics rules. From this embarrassing and, many would argue, unnecessarily consequential episode, Albo has spun a witty, self-deprecating, avenging and thoughtful piece on the power of consumerism, the (checks watch) death of print media, the effects of an online snark attack and what it means to live in New York City if your greatest talent is writing. Hint: You don't get to live in a building you worry might become a terrorist target.

Albo is dazzlingly articulate on the page, and does not give himself a break in his play, forcing himself to ruthlessly enunciate through sentences most people could only hope to read silently to themselves correctly. His intelligent monologue is punctuated with occasionally earthy outbursts (such as describing himself as not being able to afford to so much as fart in an expensive suit), but overall, hearing him speak feels like the funnest college course ever, the kind where the professor is kind of cute and you don't have to take notes because you're absorbing every syllable in the syllabus.

Albo skillfully sketches out the particulars of the junket that torpedoed his career, providing surgically exact impersonations of some of the players (including his young then-boyfriend, who also turns out to have been a player) and giving them the comeuppance he makes you believe they deserve. But while bitter isn't the last word you'd use to describe him, it isn't in the Top 10, either; Albo owns his frustration and certainly knows how to skewer the  wealthy, but he saves his greatest disdain for our (and his) obsession with swag, with luxury, with buying whatever-it-is whoever-they-are are selling.

Some of the funniest lines I've heard in a play since The Boys in the Band pop up in this slight but jugular-jabbing production, and none of them made me feel guilty for the laugh. It's exactly not like watching a Real Housewives episode—any franchise.

As someone whose fortunes are being adjusted downward as I search for a new job for the second time in two years and prepare to move...somehow...I was rapt at his ruminations on trying to make his way, in his forties, in the teens in NYC. He's right that writing is fast becoming a hobby for the rich, and as such, it will soon after become passé and disappear, joining the passenger pigeon and newsstands as things that used to happen but don't anymore.

If you have a chance to go on this Junket, take the plunge. Especially if you get free tickets like I did, which is exactly what this play is railing against, god damn it.

P.S. Don't miss the passive-aggressive, yet positive, New York Times review of this show. It's interesting to read the paper's take on a guy doing a show about how the paper fired him.