Debtor's Prison: A Review Of BAD WITH MONEY @ The Duplex Comments (0) 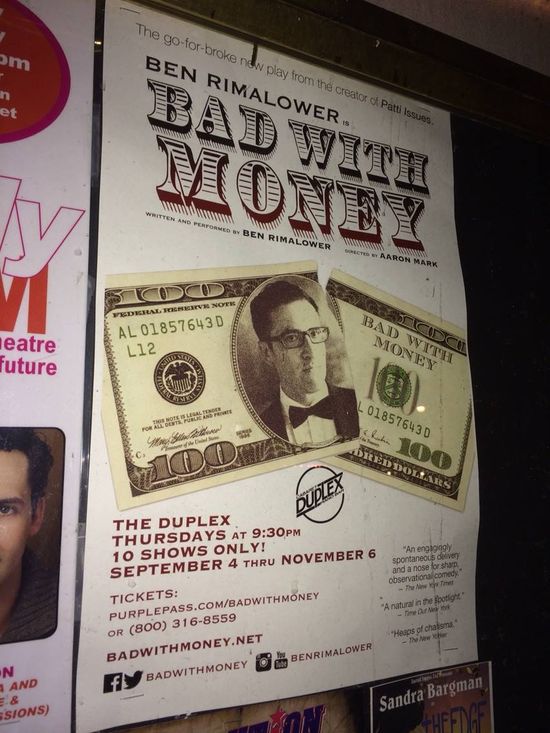 When Ben Rimalower was gracious enough to invite me to his latest one-woman show, Bad With Money at The Duplex here in NYC, I knew immediately it was a show for me.

For 70 minutes, Ben—whose Patti Issues was a theater-world fave two years ago—charmingly but unflinchingly recalls every poor financial decision he's ever made, starting with mismanaged allowances, progressing through credit debt fueled by shopping sprees and devolving into theft, which threatened to destroy his career goals.

It's pretty heavy stuff ultimately; Rimalower is dealing with multiple addictions, but none more serious than his desire for more! more! more! As dark as things are, Rimalower is adept at making it okay to talk about. He manages to expose the ridiculousness of his sickness along with the self-destructiveness, and makes the audience feel okay hearing every detail.

I for one related to Rimalower's issues. I'm not in dire straits, but I'm not where I was in my thirties, and living in New York (how do people do it?) makes it easy to throw away a substantial amount of money and invite debt into your life as a permanent roommate.

Ben can't hold onto his hard-earned loot, but he knows how to hold a stage—and if you're worried it's a downer, just imagine a long sequence about a money-obsessed kid blithely deciding to “prostitute” in order to be able to afford Chinese takeout, a nice murse and a bong. (A couple of recognizable sex workers in the audience were probably like, “What's the big deal?” as Rimalower described selling himself.)

My only criticism is that while the show documents an emotional journey, there is no closure. But there seldom is in life either, making Bad With Money a good investment.

Bad With Money is at The Duplex on select dates through November 6.