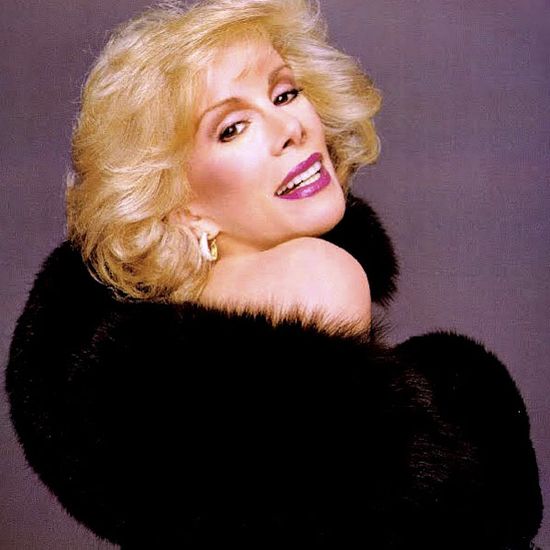 Well, this has felt inevitable ever since word broke that Joan Rivers had gone without oxygen for an extended period of time after she stopped breathing during a routine throat procedure at Yorkville Endoscopy in New York City:

The iconic entertainer has died at 81 in a private room after leaving intensive care and being removed from life support. 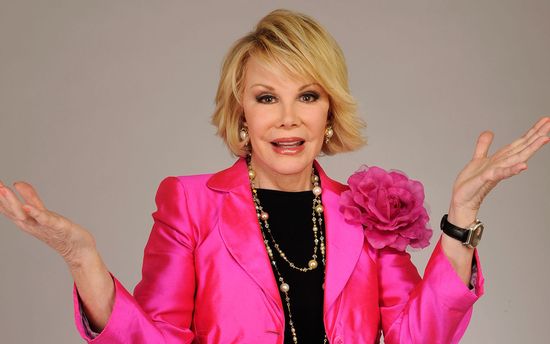 The florid fashionista (Image via E!)

Her daughter, Melissa (b. January 20, 1968), released the following statement to news outlets:

“It is with great sadness that I announce the death of my mother, Joan Rivers.

“She passed peacefully at 1:17 PM surrounded by family and close friends. My son and I would like to thank the doctors, nurses and staff of Mount Sinai hospital for the amazing care they provided for my mother.

“Cooper and I have found ourselves humbled by the outpouring of love, support and prayers we have received from around the world.They have been heard and appreciated.

“My mother's greatest joy in life was to make people laugh. Although that is difficult to do right now, I know her final wish would be that we return to laughing soon.”

Rivers would have had something darkly hilarious to say about all this, but for now, it's just sobering to be reminded how unbelievably fragile life can be—one can go from the picture of health, albeit at an advanced age, to being on life support to being dead within a matter of hours and days. 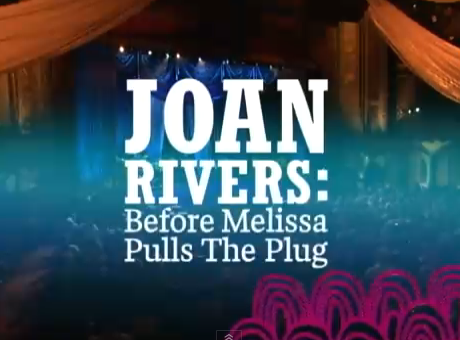 Joan would probably laugh at the irony of her 2006 special's title...

Rivers's career began in the '60s, when she followed in Phyllis Diller's (July 17, 1917—August 20, 2012) footsteps as a sort of wise-cracking, foul-mouthed housewife telling it like it was. She achieved a significant breakthrough via an appearance on The Tonight Show, after which Johnny Carson (October 23, 1925—January 23, 2005) told her, “You're going to be a star.”

By the '80s, she was the country's top female comic; catchphrases “Can we talk?” and “Grow up!” as well as a feigned vomiting noise (you know the one) were closely associated with her.

The two remained close until Rivers was offered a rival talk show, after which Carson iced her out totally and permanently, a rift that informed the rest of Rivers's life and career. She was banned from The Tonight Show until an appearance this year:

After establishing herself as an A-list stand-up, Rivers dabbled in directing (Rabbit Test in 1978 from her own script) and writing—she was the twisted mind behind one of my all-time favorite TV movies, The Girl Most Likely To... (1973), starring Stockard Channing and Ed Asner.

Following her husband Edgar's suicide and an awkwardly self-exhonerating TV movie about the experience starring herself and her daughter (1994's Tears and Laughter: The Joan and Melissa Rivers Story), Rivers—infamous for her relentless fat-shaming and other un-P.C. jokes at the expense of celebrities and newsmakers—rebranded herself as a tart-tongued fashionista, achieving her greatest fame in her seventies as the heartless and soulless (wink) of Fashion Police (2002—2014). 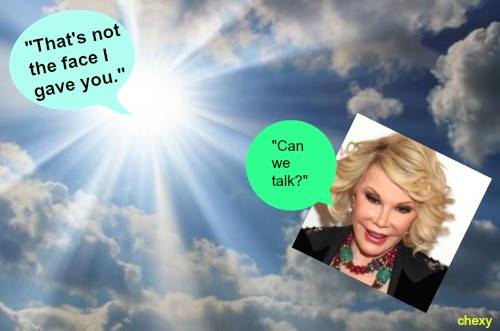 For better or for worse, she became closely associated with hawking items on QVC and as one of the most obvious nip-and-tuckers of all time; both contributed to her evolving brand. She became, inarguably, a one-of-a-kind in a celebrity landscape peopled by dime-a-dozens.

She was also the star of the successful could-this-be-reality? series Joan & Melissa: Joan Knows Best (2011—2014), on which she mock-warred with her daughter and mock-embarrassed her adorable grandson, Cooper.

At the time of her death, Rivers was busy promoting her latest best-seller Diary of a Mad Diva—she had attended an event for the book the day before her fateful surgery—and was also doing live stand-up every chance she got. She performed a set at the Laurie Beechman in Manhattan the night before her surgery, joking that she was so old she could go at any time, which would be a great story for the audience.

Rivers's death will be cheered by many—never a stranger to controversy, the last big issue she had to deal with (not counting bolting from a CNN inquisition) was the uproar that ensued after she said the sympathy for civilian deaths during Israel's Gaza offensive was misplaced because Palestinians deserved to be dead. She later clarified that she'd meant to say Hamas, not all Palestinians, deserved to be dead. But in keeping with her character, her clarification was no apology.

But she holds a special place in the hearts of many others, and in spite of being a Republican who supported gay rights and AIDS causes, making her a gay-community favorite. If you're gay and/or have many gay friends, your Facebook is going to be overflowing with Joan Rivers tributes for a solid week unless Zac Efron ODs or something. Rivers greeting my posse backstage in 2011 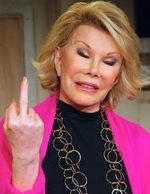 After having a love/hate for Joan Rivers for years [I felt bad for Elizabeth Taylor (February 27, 1932—March 23, 2011) and Helen Keller (June 27, 1880—June 1, 1968) jokes are little base even for the likes of me!), I got to see her perform in NYC and found her set to be 99% hilarious (dead Haitians after the earthquake didn't get a smile out of me), and found Rivers to be lovely in person, very engaged and friendly and communicative.

It's a terrible shame when someone dies too young, and it should not be overlooked that sometimes—maybe almost always—81 can be too young, too.

I'll leave you with this amazing interview by Joan (who I never thought was in her element as a straight talk-show host) of Lucille Ball. There is so much going on in this interview, it's mind-blowing:

The part where Rivers says five days in the hospital is too long is accidentally poignant.