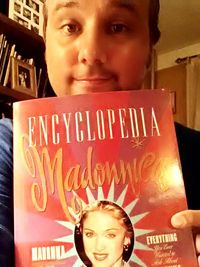 When I met performer Adolpho Blaire (pictured, proving his love for Madonna to me) at Ben Rimalower's hilarious/terrifying one-man show Bad With Money tonight, I had a funny feeling we'd wind up with a lot in common—one of the first things he mentioned is that he'd just uploaded two videos of himself as a little boy rocking out to Madonna.

I think he's just joined the ranks of Robert Jeffrey and Shaun Sperling with these flametastic displays!

The first is this unbelievably committed rollerblading performance (he calls it RollerPrancing) set to Madonna's “Oh Father”:

After the jump, we get a closeup of Adolpho's tight vogueing, complete with finger-snapping, near-splits and strategic clapping. Too bad Madonna got over her penchant for taking little boys on tour with her after Who's That Girl, because Adolpho would've killed on Blond Ambition...