Hey, Joe Jonas is a person, too! He's hot, too! And now he has his own opportunity to get your attention, as a cast member of the indie thriller The Highway Is for Gamblers, written and directed by Alexandra McGuinness. 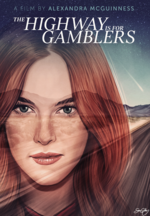 Starring Bonnie Wright of the Harry Potter movies, Nikki Reed from Twilight and Vikings actor Gustaf Skarsgard, The Highway Is for Gamblers takes place in the desert, where a girl can disappear as fast as a tumbleweed on the move.

From the film's finishing-funds Kickstarter:

“Heidi and Jane are best friends living in a sprawling desert community. After a series of relationship problems mars their friendship, Jane goes missing at a rodeo. Heidi begins a search
across the desert for her friend, digging up secrets and encountering the violence of life on the road, crossing paths along the way with a series of unusual men in her hope for an honest connection in a dishonest world. Heidi is constantly searching for people who don't want to be found. She is open and trusting, and in the universe the film is set, these things karmically add up and play against her.”

No word on if Joe will be naked in this as Nick will be in Kingdom!