Freaking Out: A Review Of SIDE SHOW's Triumphant Return To Broadway Comments (0) 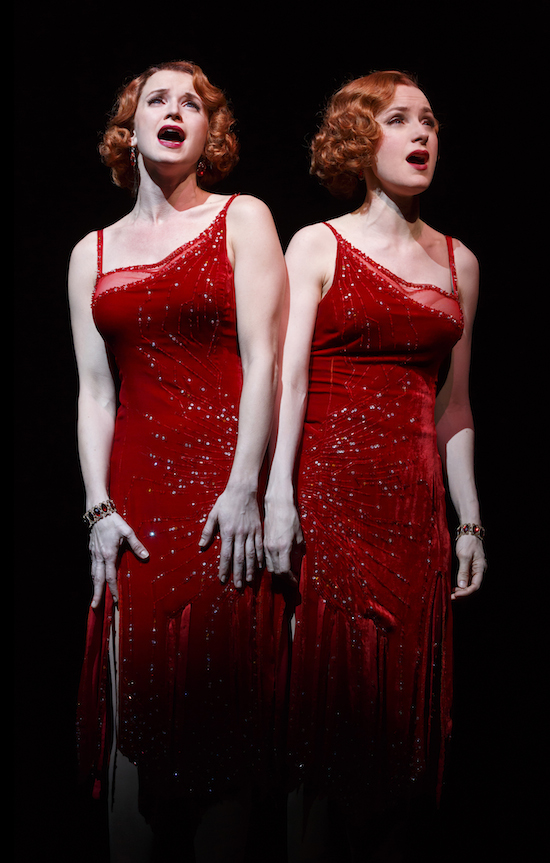 The original 1997 production of Bill Russell/Henry Krieger musical Side Show, with Alice Ripley and Emily Skinner, ran fewer than 100 performances before disappearing into cult status. It's back, with a robust re-imagining by Oscar-winning director Bill Condon that for the most part gives the already intriguing premise what should be enough razzle-dazzle to ensure a longer-lasting hit.

Erin Davie and Emily Padgett, singing powerfully and beautifully bringing their characters to life, play the real-life Hilton Twins, conjoined girls who were mercilessly exploited (sold, even) as children and then further exploited in Vaudeville as adults. Daisy wants the fame and adulation, whereas Violet just wants to be normal; neither will truly achieve her dream, and for better or for worse, neither will ever walk alone.

Ryan Silverman plays the complex backer who rescues the girls from indentured servitude at the hands of “Sir” (Robert Joy), and Matthew Hydzik is his sidekick, a closeted gay man with dreams of performing but who is saddled with a major flaw—a conscience. Together, the men help make the Hilton Twins into legit stage stars, but as the women slowly realize, performing for more people and more money never really removes them from the act of trading on their deformity—they are forever seen as freaks, no matter who's paying.

Former sideshow cannibal “Jake” (David St. Louis) is the only guy around who truly cares about the girls—especially Violet—but due to conventions (he's black) is not the right choice for a woman who wants to make no waves.

As the show zipped along, it seemed each of the leads was given a chance to truly shine dramatically as well as to show off his or her chops.

Featuring heartfelt singing that elevates some very talky, unlyrical songs (with obvious exceptions being “Who Will Love Me As I Am?” and “I Will Never Leave You”) and several charming Vaudeville numbers with good humor, razzle dazzle and some of the cutest male dancers this side of Broadway Bares, the show overall is an emotional success and a musical pleasure that connects with its audience through pathos and humor.

On a slightly separate note...

My only major grudge is an ending that feels tacked on and gives far too much importance to the girls' appearance in Tod Browning's 1932 Hollywood film Freaks, which is unfairly painted as their nadir. I recommend you watch Freaks (snippets above), even if Chained  for Life (1951) remains fairly repulsive: