Persecution Cumplex: Is There Really A Truvada Backlash? Comments (0) 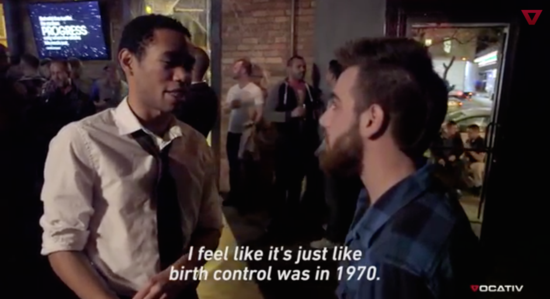 I find parts of this Truvada video infuriating, but not for the reasons the makers think. It's supposed to cover (albeit in the space of a couple of minutes) the concept that Truvada, the drug you should really know about by now (most gay men I encountered still hadn't heard of it as recently as a year ago), and its backlash.

The introductory paragraph above the video states that Truvada is being called a party drug , but I've only ever seen it called that by a couple of very vocal critics.

I actually think the bulk of the alleged backlash is imaginary.

I really have not encountered resentment toward Truvada in the real world. No one I've met has expressed anything but healthy skepticism, curiosity or positive feelings about Truvada. The only time I've ever heard the phrase “Truvada whore” was from people on Truvada wearing it as a T-shirt. (And later, I read that it had originated in a critical essay about the drug, and that the man who coined the phrase has now done a 180 on the issue.)

The guys in the Truvada Whore tees seem to have embraced the name even if it has never been used against them in a real-world situation.

But what's infuriating about the video is that Truvada proponents continue to insist that people who take it are no more likely to start having sex without condoms, which is based on an initial study that showed condom use didn't decline with Truvada use. However, Truvada was first conceived as a last-resort preventative for sex workers and HIV-negative men with HIV-positive partners, so it would make sense that people in those situations would continue using condoms. (The latter can probably stop using condoms, too now, at least if they feel reassured by the research that suggests guys whose HIV is at an undetectable level can't transmit it anymore.)

Now that Truvada can boast a 90% success rate—not 99%, as is often tossed around—I think it's ludicrous to suggest that men on Truvada won't begin to use the pill and losing the condoms. I'm not even arguing whether that's bad news, I'm just stating that it's obviously true. Even in the video, a youngish man whose job it is to counsel people on how not to get HIV says casually that he's had condomless sex with men other than his boyfriend while on Truvada. Any cursory examination of Grindr or, more bluntly, Craigslist will find guys touting their status as Truvada users and bareback enthusiasts.

I realize people over a certain age are more likely to be worried about Truvada and its implications—which, by the way, is perfectly rational and should not be blown off by younger people who are being at least as quick to disregard any concerns as the older set is being to overly emphasize them—but I also think Truvada's advocates are being disingenuous to continue stating that Truvada is just one more way to avoid HIV as opposed to being well on its way to replacing condoms, the avoidance of promiscuity and sero-sorting. Once people will admit to that, I think the discussion about Truvada will be more honest.

In my own real-world practice, I have a buddy who is on Truvada and is HIV-negative. If anyone thinks that doesn't make me more likely to have condomless sex with him, well, they probably haven't seen him.

But in case anyone really thinks taking Truvada makes someone a whore, I would ask: Does wearing a condom while having sex with 1,000 guys make someone less of a whore? I 100% do not understand guys who spent most of their time trying to collect semen, and there might well be a pathology going on if someone's sex life is more compulsive than liberating, but aren't we past trying to make someone else sluttier than ourselves just to make ourselves feel superior?