The Naked Truth: A Review Of THE ANDY COHEN DIARIES Comments (0) 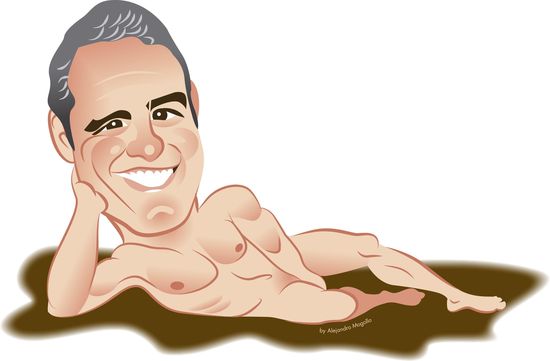 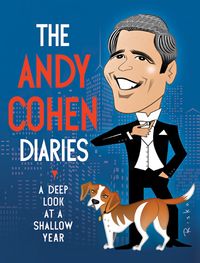 The Andy Cohen Diaries: A Deep Look at a Shallow Year (Henry Holt, $26) is the follow up to Cohen's best-selling Most Talkative: Stories from the Front Line of Pop Culture. That book was fun, a mix of media memoir and gay came-of-age story, like what you'd get if David Sedaris gave a shit about upscale ladies who punch.

But I was much more eager to read Andy's latest because I share his obsession with The Andy Warhol Diaries, the 1987 publication of the late pop artist's mundane, gossipy, catty, banal, unintentionally sociologically insightful day-to-day journals. Even without reading a word of Cohen's new work, he already wins for best title of the year. He's also inoculated himself against any bad reviews by embracing an earlier work that he notes was dismissed as “a vapid assortment of name-dropping and celebrity bashing,” which is only true if you're someone who doesn't care that Warhol noted Madonna and Timothy Hutton were hanging out together and accidentally broadcast that fact to the New York Post one day in the '80s.

But this Andy doesn't disappoint, coming across as a Warhol with an agenda, more of a sense of the ridiculous and a libido.

Juicily, Cohen starts the book right when those rumors circulated that he was engaged to straight athlete Sean Avery. Hey, there have been more damaging rumors than to be linked to this. But it's a great way to begin, as it lets you know the author isn't going to hold back. Just a few pages later, he goes after Kevin Spacey—who deserves to be gone after—with this observation:

“Kevin Spacey was in front of us with what looked like a face full of makeup and three male companions who were definitely not raising any questions.”

“I still get enraged when I think about him talking about being in love with that woman on 60 minutes. Come out, sir.”

One wonders what kinds of pre-coming out conversations he had with close friends who are gay and were closeted, but then many famous, closeted men never pretend to be straight and never act like smug assholes about being professionally closeted. (On a related note, Spacey's currently in Horrible Bosses 2, playing a smug asshole.) I would love to know why Spacey ticks him off more than other closeted gay people Andy's around, even though I agree with him there.

Cohen is refreshingly honest about the behind-the-scenes machinations at his show, which involve placating publicists while being true to who he is. Case in point: Lady Gaga's PR said no questions about Madonna or Perez Hilton. Gaga herself said to ask anything he wanted. What was a boy to do? He wound up letting Gaga slide on the Madonna question because she'd been so forthcoming about so many other things, including peeing in the garbage can of her dressing room.

The Andy Cohen Diaries is not simply a collection of zingers, though—Cohen reveals vulnerability in matters of the heart:

“I taped Bethenny and it was kind of surreal to be a guest on her big new talk show. She was asking me about my love life, which I'm more comfortable asking others about than revealing myself, and she asked me how many times I had been in love and I said two and a half. I said how many times do you think you fall in love in a life and she said, 'Two and a half times.' Oh well, I guess my goose is cooked after my college love, John Hill, and the one-half time in 1999. Maybe I still have the 50 percent I didn't use ahead of me. Please, Lord. Give me 50 percent of love.”

I don't understand the math there, but I think he's got a shot.

He's famously prickly about kids, and that pops up again here (“I'm all for boosting Quvenzhané Wallis's career, but does the world need a reboot of Annie?” No. Asked and answered.), he confirms he Googles himself (I love his aside about what didn't make his Lady Gaga Glamour interview, in which he opines that the magazine's caution sank the piece's chances at notoriety), he warns that one should never curse around any Muppets and he gives a quick run-down of literally every episode of What What Happens Live. What more could you want? He's not Joan Didion, but she's not Andy Cohen.

It's unfortunate that commenters on gay blogs are so divided about Cohen. I think he's either one's cup of tearoom or is not, but he's a funny, successful innovator who has triumphs and makes mistakes in the public eye, and for that, I think he's a great team mate. Also, his diary is at least as interesting as “Marcia Brady”'s and—I'm going to say it—probably more.

As you'll see in my own upcoming memoir in 2015 (spoiler alert: I'm not engaged to Sean Avery either), I can't not love a memoirist who writes:

Nobody likes a superskinny autobiographer. Nobody.

P.S. I think I might have to do an index for his book in the same way Fame Magazine ('memba that?) did of Andy Warhol's. I still have that index and it's a treasure.