#burningcrosses: Unfollowing Madonna On Instagram Is The New Selma! Comments (0)

I would like to thank all my fans for recreating my album cover with the ❤️Rebel Heart ribbon on the faces of so many Great Hero's. It shows that you are also celebrating and in admiration of these great freedom fighters! When I repost these images i am saying YES! These people are all Rebel Hearts in one way or another from Martin Luther King to Jesus to Nelson Mandela to John Lennon. YES! Lets celebrate them! The world needs more people like them. I hope to one day accomplish. 1 100th of what these Rebel Hearts have accomplished. As I Said in a previous post "I walk in the footsteps of Giants" and i will continue to do so G*D willing. They are my guiding light. ❤️#rebelheart ❤️#livingforlove

After having the temerity to re-post fan-made images showing Bob Marley (okay), Nelson Mandela (WTF?) and Martin Luther King Jr. (Oh, my Oprah Winfrey!!!) in a Rebel Heart motif and expressing her admiration for them, Madonna was promptly destroyed on social media by black people and their ardent defenders who felt Madonna was inappropriately appropriating (inappropriating?) these men for her own commercial purposes.

One gay guy started out very fairly, stating he felt it was offensive. He implied something about Madonna's age, but snapped back that it wasn't about her being old when I pointed that out. I didn't back down but didn't lose my cool, but before long, he was blocking me while calling me a pathetic blogger in my forties who's single and blindly devoted to his idol, a sad old woman who is irrelevant.

I'm not sure which aspect of my bio he finds more repulisve—being single, being in my forties, being a fan or blogging. I got the impression it was blogging, which, I mean, he spends his time tweeting, so... 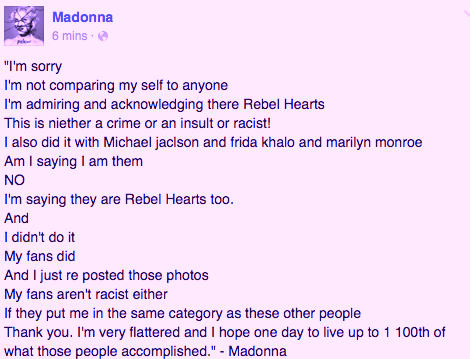 Anyway, it's not even worth 10 more seconds to unpack, but who's the delusional one: The gay guy (me) who is a big fan of a singer's and is critical of her when it's warranted, or the gay guy whose profile announced he's a “regular Joe,” who detests everything about Madonna and who spews all that personal hatred...all because he was so offended that Madonna was being “insensitive?”

Nelson Mandela would be so proud of the people who scorned Madonna in ageist, sexist and BONUS POINTS racist terms over this misstep of hers. I'm sure now that she's Instagrammed that she doesn't feel she has accomplished 1/100 of what those men have accomplished, Madonna's haters will eat crow or at the very least forgive and forget.